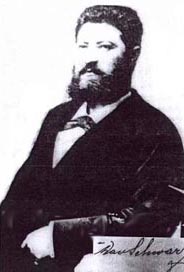 David Schwarz was a Hungarian aviation
Aviation
Aviation is the design, development, production, operation, and use of aircraft, especially heavier-than-air aircraft. Aviation is derived from avis, the Latin word for bird.-History:...
pioneer of Jewish descent.

Schwarz created the first flyable rigid airship
Rigid airship
A rigid airship is a type of airship in which the envelope retained its shape by the use of an internal structural framework rather than by being forced into shape by the pressure of the lifting gas within the envelope as used in blimps and semi-rigid airships.Rigid airships were produced and...
. It was also the first airship with an external hull made entirely of metal. He died before he could see it finally fly. Sources claimed that Ferdinand Graf von Zeppelin purchased the patent from his widow, but Hugo Eckener
Hugo Eckener
Dr. Hugo Eckener was the manager of the Luftschiffbau Zeppelin during the inter-war years, and was commander of the famous Graf Zeppelin for most of its record-setting flights, including the first airship flight around the world, making him the most successful airship commander in history...
disputed this.

David Schwarz was the son of Jewish parents. He was a wood merchant born in Županja
Županja
Županja is a city in eastern Slavonia, Croatia, located 254 km east of Zagreb. It is administratively part of the Vukovar-Syrmia county. It is inhabited by 12,185 people ....
, but he spent most of his life in Zagreb
Zagreb
Zagreb is the capital and the largest city of the Republic of Croatia. It is in the northwest of the country, along the Sava river, at the southern slopes of the Medvednica mountain. Zagreb lies at an elevation of approximately above sea level. According to the last official census, Zagreb's city...
, then part of the Kingdom of Croatia-Slavonia
Kingdom of Croatia-Slavonia
The Kingdom of Croatia-Slavonia or Croatia Slavonia was an autonomous kingdom within the Austro-Hungarian Empire. It was part of the Hungarian Kingdom within the dual Austro-Hungarian state, being within the Lands of the Crown of St. Stephen or Transleithania...
, Austro-Hungarian Empire.

Although Schwarz had no special technical training, he busied himself with technology and developed improvements for woodcutting machinery.

Schwarz first interested himself with airships in the 1880s. This occurred as he stayed in a Croatian log cabin at the start of winter to supervise the treefelling in a newly purchased forest. As the work took longer than planned he had his wife send him literature to while away the evenings. Because the works of Charles Dickens
Charles Dickens
Charles John Huffam Dickens was an English novelist, generally considered the greatest of the Victorian period. Dickens enjoyed a wider popularity and fame than had any previous author during his lifetime, and he remains popular, having been responsible for some of English literature's most iconic...
and Victor Hugo
Victor Hugo
Victor-Marie Hugo was a Frenchpoet, playwright, novelist, essayist, visual artist, statesman, human rights activist and exponent of the Romantic movement in France....
did not appeal to him, an assumption arising from one of his wife's letters, she sent him a work from Aristotle
Aristotle
Aristotle was a Greek philosopher and polymath, a student of Plato and teacher of Alexander the Great. His writings cover many subjects, including physics, metaphysics, poetry, theater, music, logic, rhetoric, linguistics, politics, government, ethics, biology, and zoology...
and a Mechanics
Mechanics
Mechanics is the branch of physics concerned with the behavior of physical bodies when subjected to forces or displacements, and the subsequent effects of the bodies on their environment....
textbook. Although Schwarz became excited, it is not altogether clear this inspired him to build his own airship. The wood business suffered due to his obsession and, like other airflight pioneers, his project attracted mockery. Nevertheless his wife Melanie supported him. Schwarz busied himself using aluminium
Aluminium
Aluminium or aluminum is a silvery white member of the boron group of chemical elements. It has the symbol Al, and its atomic number is 13. It is not soluble in water under normal circumstances....
for construction, then a very new material.


In Russia and the first airship

David Schwarz worked out the construction of his all-metal airship. He then offered his documents to the Austria-Hungary war minister. Great interest was shown, but no one was ready to provide financial support.

The Russian military attaché, a technically educated man, advised Schwarz to demonstrate his airship in St. Petersburg. There, an airship following Schwarz's idea was built in 1893. Schwarz and later also his widow assumed that test flights would also be made there, but this did not happen. He began construction late 1892, with industrialist Carl Berg
Carl Berg (airship builder)
Carl Berg was a German entrepreneur and airship builder.Berg came from a commercial iron-works family. His great grandfather founded a button-making factory on 1786 in Lüdenscheid. In the following generations the factory developed into an important metal-working company...
supplying the aluminium and necessary funding. Sources report problems arose during gas-filling. George Whale wrote that on "inflation, the framework collapsed". Dooley cites Robinson's detailed dimensions, weights and engine performance, and reports several deficiencies in the design: Schwarz apparently intended the metal skin to hold the gas directly without gas bags; Russian engineer Kowanko pointed out the lack of a ballonet
Ballonet
A Ballonet is a air-filled flexible container that is located inside the envelope of a non-rigid or semi-rigid airship. Such an airship can have one or more ballonets, commonly one fore and one aft...
would cause stresses on the skin during ascent and descent; the skin was not airtight; temporary "filling bags" were also not airtight, Schwarz and the manufacturer both blaming each other; and finally the skin imploded after filling directly and waiting.

The specifications of this first airship were:

The circumstances of Schwarz's return is unclear, reports were of a hasty departure from Russia.


Back in Germany and construction at Tempelhof

In Germany in 1894, Carl Berg
Carl Berg (airship builder)
Carl Berg was a German entrepreneur and airship builder.Berg came from a commercial iron-works family. His great grandfather founded a button-making factory on 1786 in Lüdenscheid. In the following generations the factory developed into an important metal-working company...
procured a contract to build an airship for Royal Prussian Government, citing Schwarz as idea-provider. Carl Berg had already experience in working and developing the then new aluminium, and was to later deliver parts for Zeppelin's first airship. With financial and technical help from Berg and his firm, the airship was designed and built.

The construction began in 1895 at the Tempelhof
Tempelhof
Tempelhof is a locality of Berlin within the borough of Tempelhof-Schöneberg. It is the location of the former Tempelhof Airport, one of the earliest commercial airports in the world. It is now deserted and shows as a blank spot on maps of Berlin. Attempts are being made to save the still-existing...
field in Berlin. For a time the Prussian Airship Battalion put its grounds and personnel at Schwarz's disposal. The pieces were produced in Carl Berg's Eveking Westphalia factory and under the direction of Schwarz, assembled in Berlin. A gondola, also of aluminium, was fixed to the framework. Attached to the gondola was a 12 hp Daimler engine that drove aluminium propellers. One of the propellers was used to steer the craft.

In 1896 June Carl Berg was in Moscow and sent a card to his stepfather, apparently indicating that he had searched for information on Schwarz and became cynical of delays and was nearly convinced he had been swindled.

Due to delays, the airship was first filled with gas on 1896-10-09 and tested, but the results were not satisfactory because the hydrogen gas delivered by the Vereinigten Chemischen Fabriken from Leopoldshall (part of Staßfurt
Staßfurt
Staßfurt is a town in the Salzlandkreis district, in Saxony-Anhalt, Germany. It is situated on both sides of the river Bode, approximately northeast of Aschersleben, and south of Magdeburg. Pop. 23,538....
) was not of the required quality and did not provide sufficient lift. (Some sources mention a test was done on October 8, 1896.) It was reckoned that gas with a density of 1.15 kg per cubic metre was needed. Gas with that quality could not be produced until 1897-01-13, the day of Schwarz's death.

The city of Vienna honoured David Schwarz with an Ehrengrab
Ehrengrab
An Ehrengrab is a distinction granted by certain German, Swiss and Austrian cities to one of their citizens for extraordinary services or achievements in their lifetime. If there are no descendants or institutions to care for the gravesite, the communities or cities will take responsibility for...
(a memorial grave) and with a Grabmal (a kind of tomb) at the Zentralfriedhof
Zentralfriedhof
The Zentralfriedhof is one of the largest cemeteries in the world, largest by number of interred in Europe and most famous cemetery among Vienna's nearly 50 cemeteries.-Name and location:...
.

Carl required confirmation of Schwarz's death, suspecting he had fled to sell his secrets. Nevertheless, Berg resumed the work with Melanie, Schwarz's widow and together with the Airship Battalion they completed the airship with the addition of a gas relief valve.

This second airship had these specifications:
Sean Dooley analysed the engineering structure from the drawings and considered it deficient such that the skin took most of the shear stresses, as could be seen in the photo in flight.

The second airship tested with partial success at Tempelhof near Berlin, Germany, on 3 November 1897. Battalion mechanic Ernst Jägels climbed into the gondola and lifted off at 15:00. The ship broke free of the ground crew, and because it rose too fast Jägels disengaged the horizontal propeller. At about 130 metre altitude the driving belt slipped off the left propeller, causing partial loss of steering, the ship "turned broadside to the wind, and the forward tether broke free." As the ship drifted up to 510 metres the belt slipped off the right propeller, thus losing all steering. Jägels then opened the newly fitted gas release valve and landed safely, but the ship turned over and collapsed.

Starting around the time of the trial flight crash, and for decades after, various reports were written, some often conflicting and misleading.

Later, Berg, and also his son would write negatively of his experiences with Schwarz.

Between 2000-12-03 and 2001-04-29 the Museen der Stadt Lüdenscheid held an exhibition which covered Berg, Schwarz and Zeppelin history from 1892 to 1932, which displayed papers, photographs and remnants.