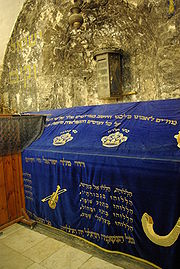 King David's Tomb is the name given to a Jewish
Jews
The Jews , also known as the Jewish people, are a nation and ethnoreligious group originating in the Israelites or Hebrews of the Ancient Near East. The Jewish ethnicity, nationality, and religion are strongly interrelated, as Judaism is the traditional faith of the Jewish nation...
religious site on Mount Zion
Mount Zion
Mount Zion is a place name for a site in Jerusalem, the location of which has shifted several times in history. According to the Hebrew Bible's Book of Samuel, it was the site of the Jebusite fortress called the "stronghold of Zion" that was conquered by King David, becoming his palace in the City...
in Jerusalem, near the Hagia Maria Sion Abbey
Hagia Maria Sion Abbey
Hagia Maria Sion Abbey is a Benedictine abbey in Jerusalem on Mt. Zion just outside the walls of the Old City near the Zion Gate.It was formerly known as the Abbey of the Dormition of the Virgin Mary, but the name was changed in 1998 in reference to the church of Hagia Sion that formerly stood on...
; the site has traditionally been viewed as the burial place of King David
David
David was the second king of the united Kingdom of Israel according to the Hebrew Bible and, according to the Gospels of Matthew and Luke, an ancestor of Jesus Christ through both Saint Joseph and Mary...
, the second king of Israel. It is situated in a ground floor corner of the remains of the former Hagia Zion, a Byzantine church; the upper floor of the same building has traditionally been viewed as the Cenacle of Jesus
Cenacle
The Cenacle , also known as the "Upper Room", is the term used for the site of The Last Supper. The word is a derivative of the Latin word cena, which means dinner....
. In 1335, the church became a Franciscan
Franciscan
Most Franciscans are members of Roman Catholic religious orders founded by Saint Francis of Assisi. Besides Roman Catholic communities, there are also Old Catholic, Anglican, Lutheran, ecumenical and Non-denominational Franciscan communities....
monastery
Monastery
Monastery denotes the building, or complex of buildings, that houses a room reserved for prayer as well as the domestic quarters and workplace of monastics, whether monks or nuns, and whether living in community or alone .Monasteries may vary greatly in size – a small dwelling accommodating only...
, but, due to tensions with the Greek Orthodox Patriarch
Patriarch of Constantinople
The Ecumenical Patriarch is the Archbishop of Constantinople – New Rome – ranking as primus inter pares in the Eastern Orthodox communion, which is seen by followers as the One, Holy, Catholic, and Apostolic Church....
, the monastery was closed in 1551, and ownership of the site was transferred to a Muslim
Muslim
A Muslim, also spelled Moslem, is an adherent of Islam, a monotheistic, Abrahamic religion based on the Quran, which Muslims consider the verbatim word of God as revealed to prophet Muhammad. "Muslim" is the Arabic term for "submitter" .Muslims believe that God is one and incomparable...
family. The building is now part of the Diaspora Yeshiva
Yeshiva
Yeshiva is a Jewish educational institution that focuses on the study of traditional religious texts, primarily the Talmud and Torah study. Study is usually done through daily shiurim and in study pairs called chavrutas...
.

After the 1948 Arab–Israeli War, it fell on the Israel
Israel
The State of Israel is a parliamentary republic located in the Middle East, along the eastern shore of the Mediterranean Sea...
side of the Green Line
Green Line (Israel)
Green Line refers to the demarcation lines set out in the 1949 Armistice Agreements between Israel and its neighbours after the 1948 Arab-Israeli War...
. Between 1948 and 1967 the Old City was occupied by Jordan
Jordan
Jordan , officially the Hashemite Kingdom of Jordan , Al-Mamlaka al-Urduniyya al-Hashemiyya) is a kingdom on the East Bank of the River Jordan. The country borders Saudi Arabia to the east and south-east, Iraq to the north-east, Syria to the north and the West Bank and Israel to the west, sharing...
, which barred entry to Jews even for the purpose of praying at Jewish holy sites. The closest accessible site to the site of the ancient Jewish Temple
Jewish temple
Jewish temple:*Jewish temple or The Jewish Temple, may refer to the original two ancient Jewish Temples in Jerusalem.**The First Temple was destroyed by the ancient Babylonians in 586 BCE.**The Second Temple was destroyed by Rome in 70 CE....
was Mount Zion. Jewish pilgrims from around the country and the world went to David's Tomb and climbed to the rooftop to pray.

The site was apparently not viewed as David's Tomb until the 12th century. According to Benjamin of Tudela
Benjamin of Tudela
Benjamin of Tudela was a medieval Jewish traveler who visited Europe, Asia, and Africa in the 12th century. His vivid descriptions of western Asia preceded those of Marco Polo by a hundred years...
, writing about 1173, the tomb was discovered during repairs to the church; the motivation for it being declared to be the tomb of David is uncertain. It is impossible to verify whether the tomb is original to the location, as crusaders
Crusades
The Crusades were a series of religious wars, blessed by the Pope and the Catholic Church with the main goal of restoring Christian access to the holy places in and near Jerusalem...
removed the tomb from its earlier context, and placed within it a stone sarcophagus
Sarcophagus
A sarcophagus is a funeral receptacle for a corpse, most commonly carved or cut from stone. The word "sarcophagus" comes from the Greek σαρξ sarx meaning "flesh", and φαγειν phagein meaning "to eat", hence sarkophagus means "flesh-eating"; from the phrase lithos sarkophagos...
, newly built for the purpose; the sarcophagus now rests over a 14th century floor. Since 1949, a blue cloth, with basic modernist ornamentation, has been placed over the sarcophagus. The images on the cloth include several crown-shaped Rimmon
Rimmon
Rimmon is the proper name for a number of people or objects in the Hebrew Bible:# A man of Beeroth , one of the four Gibeonite cities. # A Syrian cult image, mentioned only in 2 Kings 5:18...
placed over Torah scrolls
Sefer Torah
A Sefer Torah of Torah” or “Torah scroll”) is a handwritten copy of the Torah or Pentateuch, the holiest book within Judaism. It must meet extremely strict standards of production. The Torah scroll is mainly used in the ritual of Torah reading during Jewish services...
, and a violin
Violin
The violin is a string instrument, usually with four strings tuned in perfect fifths. It is the smallest, highest-pitched member of the violin family of string instruments, which includes the viola and cello....
, and the cloth also features several pieces of text written in Hebrew. The contents of the sarcophagus have not yet been subjected to any scientific analysis, to determine their age, former appearance, or even whether there is actually still a corpse there.

The authenticity of the site has been challenged on several grounds. According to the Hebrew Bible, David was actually buried within the City of David together with his forefathers; by contrast, the 4th century Pilgrim of Bordeaux
Itinerarium Burdigalense
The Itinerarium Burdigalense is the oldest known Christian itinerarium, written by an anonymous pilgrim from Burdigala...
reports that he discovered David to be buried in Bethlehem
Bethlehem
Bethlehem is a Palestinian city in the central West Bank of the Jordan River, near Israel and approximately south of Jerusalem, with a population of about 30,000 people. It is the capital of the Bethlehem Governorate of the Palestinian National Authority and a hub of Palestinian culture and tourism...
, in a vault that also contained the tombs of Ezekiel
Ezekiel
Ezekiel , "God will strengthen" , is the central protagonist of the Book of Ezekiel in the Hebrew Bible. In Judaism, Christianity and Islam, Ezekiel is acknowledged as a Hebrew prophet...
, Jesse
Jesse
Jesse, Eshai or Yishai, is the father of the David, who became the king of the Israelites. His son David is sometimes called simply "Son of Jesse" ....
, Solomon
Solomon
Solomon , according to the Book of Kings and the Book of Chronicles, a King of Israel and according to the Talmud one of the 48 prophets, is identified as the son of David, also called Jedidiah in 2 Samuel 12:25, and is described as the third king of the United Monarchy, and the final king before...
, Job, and Asaph
Asaph
Asaph may refer to:* Asaph Hall, 19th century astronomer* Saint Asaph, first Bishop of the Diocese of Saint Asaph in Wales...
, with those names carved into the tomb walls. The genuine David's Tomb is unlikely to contain any furnishings of value; according to the first century writer Josephus
Josephus
Titus Flavius Josephus , also called Joseph ben Matityahu , was a 1st-century Romano-Jewish historian and hagiographer of priestly and royal ancestry who recorded Jewish history, with special emphasis on the 1st century AD and the First Jewish–Roman War, which resulted in the Destruction of...
, Herod the Great
Herod the Great
Herod , also known as Herod the Great , was a Roman client king of Judea. His epithet of "the Great" is widely disputed as he is described as "a madman who murdered his own family and a great many rabbis." He is also known for his colossal building projects in Jerusalem and elsewhere, including his...
tried to loot the tomb of David, but discovered that someone else had already done so before him

Archaeologists, doubting the Mount Zion location and favouring the biblical account, have since the early 20th century sought the actual tomb in the City of David area. In 1913, Raymond Weill found eight elaborate tombs at the south of the City of David, which archaeologists have subsequently interpreted as strong candidates for the burial locations of the former kings of the city; Hershel Shanks
Hershel Shanks
Hershel Shanks is the founder of the Biblical Archaeology Society and the editor of the Biblical Archaeology Review and has written and edited numerous works on Biblical archaeology including the Dead Sea Scrolls....
, for example, argues that the most ornate of these (officially labelled T1) is precisely where one would expect to find the burial site mentioned in the Bible. Among those who agree with the academic and archaeological assessment of the Mount Zion site, some believe it actually is the tomb of a later king, possibly Manasseh
Manasseh of Judah
Manasseh was a king of the Kingdom of Judah. He was the only son of Hezekiah with Hephzi-bah. He became king at an age 12 years and reigned for 55 years. Edwin Thiele has concluded that he commenced his reign as co-regent with his father Hezekiah in 697/696 BC, with his sole reign beginning in...
, who is described in the Hebrew Bible as being buried in the Garden of the King rather than in the City of David like his predecessors.