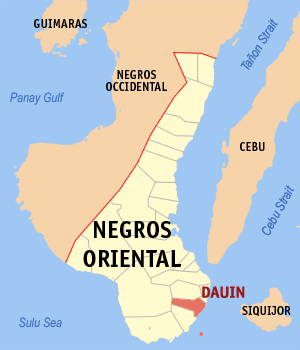 The coast of Dauin offers excellent scuba dive sites with both coral reef and muck dive opportunities. The municipality has established several sanctuaries, within which fishing and boating is absolutely prohibited. This includes sites such as Mainit sanctuary, Luca sanctuary, Dauin sanctuary and Masaplod sanctuary. These sites are well preserved and offer a huge variety and quantity of life forms.

Thanks to the dark sand in the coastal area, Dauin also offers some excellent so called Muck diving
Muck diving
Muck diving gets its name from the sediment that lies beneath most dives: A normally muddy or "mucky" environment. Other than the muddy sediment, the standard muck dive may consist of dead coral skeletons, discarded fishing equipment, tires and other man-made garbage...
, which on a point of view of biodiversity can be compared to the dives in Lembeh Strait in Indonesia. Midring blueringed octopus, Wonderpus, Mimic octopus, Poison ocellate octopus, Ambon scorpionfishes, Flamboyant cuttlefishes and Bobbit worms are frequent sights on the sandy shores of the municipality.

Apo Island
Apo Island
Apo Island is a volcanic island covering 12 hectares in land area, 7 kilometers off the southeastern tip of Negros Island and 30 kilometers south of the Negros Oriental capital of Dumaguete City in the Philippines....
is part of the jurisdiction of the municipality of Dauin. The island is also a popular site for scuba diving
Scuba diving
Scuba diving is a form of underwater diving in which a diver uses a scuba set to breathe underwater....
. As it is completely surrounded by coral reefs, the whole island is a dive site. Popular dive sites include Coconut Point, Mamsa, Cogon, Rockpoint and Chapel. Bigeyed Jacks, turtles, bumphead parrotfish and frogfishes are inhabiting the reefs of the island. It is accessible by boat, 30 minutes from the mainland.

Another tourist attraction of Dauin is the Baslay Hot Spring. The hot spring is located in Barangay Baslay. The water from the hot spring contains natural sulphur which is known to have health benefits. 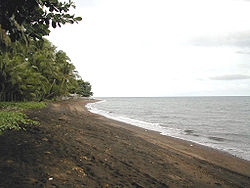 Dauin is politically subdivided into 23 barangay
Barangay
A barangay is the smallest administrative division in the Philippines and is the native Filipino term for a village, district or ward...
s.