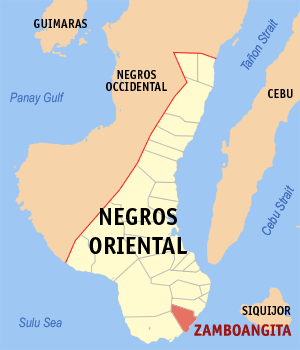 Zamboanguita is a 4th class municipality in the province of Negros Oriental, Philippines
Philippines
The Philippines , officially known as the Republic of the Philippines , is a country in Southeast Asia in the western Pacific Ocean. To its north across the Luzon Strait lies Taiwan. West across the South China Sea sits Vietnam...
. According to the 2000 census, it has a population of 23,338 people in 4,691 households.

Zamboanguita is politically subdivided into 10 barangay
Barangay
A barangay is the smallest administrative division in the Philippines and is the native Filipino term for a village, district or ward...
s.