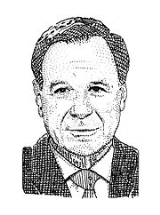 Gillerman served as the CEO of several Israeli companies, Chairman of the Federation of Israeli Chambers of Commerce, member of the board of the First International Bank of Israel
First International Bank of Israel
The First International Bank of Israel is an Israeli bank founded in 1972 through the merger of several smaller banks. It is the fifth largest bank in Israel...
and Director of Bank Leumi
Bank Leumi
Bank Leumi is an Israeli bank. It was founded in London as the Anglo Palestine Company on February 27, 1902, by members of the Zionist movement to promote the industry, construction, agriculture, and infrastructure of Palestine.-History:...
and the Bank of Israel
Bank of Israel
The Bank of Israel is the central bank of Israel. It is located in Kiryat HaMemshala in Israel's capital city of Jerusalem, with a branch office in Tel Aviv. The current governor is Stanley Fischer.-History:...
. He also served on the Prime Minister's National Economic and Social Council, the President's Committee of the Coordinating Council of Israel's Economic Organizations, as Chairman of the Israel-British Business Council, and as member of the executive board of the International Chamber of Commerce
International Chamber of Commerce
The International Chamber of Commerce is the largest, most representative business organization in the world. Its hundreds of thousands of member companies in over 130 countries have interests spanning every sector of private enterprise....
of the World Business Organization.

Gillerman has played a prominent role in helping steer Israel towards economic liberalization and a free market economy. He is actively engaged in the economic aspects of the peace process and has engaged Palestinian
Palestinian territories
The Palestinian territories comprise the West Bank and the Gaza Strip. Since the Palestinian Declaration of Independence in 1988, the region is today recognized by three-quarters of the world's countries as the State of Palestine or simply Palestine, although this status is not recognized by the...
and other Arab leaders in an attempt to further economic cooperation within the region.

On June 14, 2005, he was elected to the position of Vice-President of the 60th UN General Assembly. The last Israeli to hold this position was UN envoy Abba Eban
Abba Eban
Abba Eban was an Israeli diplomat and politician.In his career he was Israeli Foreign Affairs Minister, Education Minister, Deputy Prime Minister, and ambassador to the United States and to the United Nations...
in 1952. Israel's candidacy was put forward by the United Nations Western Europe and Others Group
Western European and Others Group
The Western European and Others Group is one of several unofficial Regional Groups in the United Nations that act as voting blocs and negotiation forums. Regional voting blocs were formed in 1961 to encourage voting to various UN bodies from regional groups...
(WEOG). In this position, Gillerman played a central role during the initial negotiation stages of the 2006 Israel-Lebanon conflict
2006 Israel-Lebanon conflict
The 2006 Lebanon War, also called the 2006 Israel-Hezbollah War and known in Lebanon as the July War #Other uses|Tammūz]]) and in Israel as the Second Lebanon War , was a 34-day military conflict in Lebanon, northern Israel and the Israeli-occupied territories. The principal parties were Hezbollah...
.

On April 24, 2008, Gillerman referred to former US President Jimmy Carter as a bigot for his meeting in Syria with Hamas leader Khaled Meshaal.