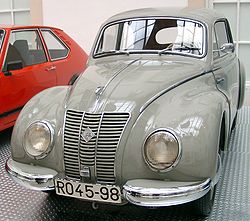 Auto Union’s manufacturing plant had been located in Zwickau
Zwickau
Zwickau in Germany, former seat of the government of the south-western region of the Free State of Saxony, belongs to an industrial and economical core region. Nowadays it is the capital city of the district of Zwickau...
when war had put an end to passenger vehicle production in 1942. After the war, with Zwickau in the Soviet occupation zone, the company was no longer able to access its former production facilities. The first post war DKWs were therefore built in a refurbished plant of Rheinmetall-Borsig
Rheinmetall
Rheinmetall AG is a German automotive and defence company with factories in Düsseldorf, Kassel and Unterlüß. The company has a long tradition of making guns and artillery pieces...
in Düsseldorf
Düsseldorf
Düsseldorf is the capital city of the German state of North Rhine-Westphalia and centre of the Rhine-Ruhr metropolitan region.Düsseldorf is an important international business and financial centre and renowned for its fashion and trade fairs. Located centrally within the European Megalopolis, the...
.

The F89 shared its underpinnings with the DKW F8 / 'Meisterklasse'
DKW F8
The DKW F8 compact front-wheel drive two-stroke engined saloon was introduced by in 1939. The F8 was slightly shorter than its predecessor despite having a marginally increased wheelbase. The base model, known as the Reichsklasse, was manufactured only till 1940 but the Meisterklasse sedan...
which had been available between 1939 and 1942, but the F89 has a steel body based on that of the DKW F9
DKW F9
The DKW F9 was the prototype of a car Auto Union intended to launch as a successor to the DKW F8.The small DKWs were among top selling small cars in Germany in the 1930s, and regular model updates were part of the company's strategy for maintaining commercial success in this growing market sector...
, a prototype which would have directly replaced the F8 on the Zwickau production lines had the war not intervened. Although many of the machine tools at that plant were crated up and shipped to the Soviet Union
Soviet Union
The Soviet Union , officially the Union of Soviet Socialist Republics , was a constitutionally socialist state that existed in Eurasia between 1922 and 1991....
in 1945, Zwickau’s new controllers also built their own version of the DKW F9 prototype, and indeed the eastern version was put into production as the IFA F9
IFA F9
The IFA F9 was a compact saloon manufactured under the auspices of the Russian and East German states between 1949 or 1950 and 1956. It was initially built at Zwickau at the plant previously owned by Auto Union...
, probably shortly before the Düsseldorf built F89. It is interesting to compare these two heirs to the original DKW prototype, and the ways in which their respective successor models evolved.

The F89 was not the first vehicle built by Auto Union after the war. That honor goes to the DKW F89L Schnelllaster / Quick truck
DKW van
The DKW Schnellaster was a van produced by DKW from 1949 to 1962 in a one box or monospace configuration featuring front wheels set forward in the passenger cabin, a short sloping aerodynamic hood, front wheel drive, transverse engine, flat load floor throughout with flexible seating and cargo...
, a curiously modern light van built on the same chassis and using the same engine / transmission package, introduced in 1949.

The form of the saloon’s body closely followed that of the prewar DKW F9
DKW F9
The DKW F9 was the prototype of a car Auto Union intended to launch as a successor to the DKW F8.The small DKWs were among top selling small cars in Germany in the 1930s, and regular model updates were part of the company's strategy for maintaining commercial success in this growing market sector...
. However, extensive ‘streamlining’ had been applied to the earlier design, and impressive claims were made for the F89’s lowered wind resistance.

In 1951 a two-seater hardtop coupe version, built by coach builders Hebmüller
Hebmüller
The coachbuilding company Hebmüller And Sons was founded in 1889 by Joseph Hebmüller, it was established in the town of Wuppertal in Germany....
of Wuppertal
Wuppertal
Wuppertal is a city in North Rhine-Westphalia, Germany. It is located in and around the Wupper river valley, and is situated east of the city of Düsseldorf and south of the Ruhr area. With a population of approximately 350,000, it is the largest city in the Bergisches Land...
became available, and the range was completed in 1953 with the addition of a three-door estate version, employing a body conversion that made extensive use of timber. The F89 estate, like its steel bodied, successors, was branded as the ‘Universal’. 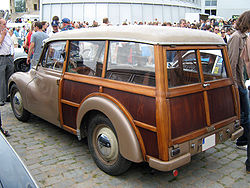 The F89 featured a two-cylinder two-stroke engine of 684 cc with a stated output, at launch, of 23 bhp. A maximum speed of 100 km/h (62 mph) was claimed for the saloon (95 km/h / 59 mph for the 'Universal' estate). The engine was water-cooled, but there was no water pump. Cooling used a gravity powered ‘Thermosyphon’ system. The front wheels were connected to the engine by means of a three-speed manual gear box controlled via a dash-board mounted ‘Krückstockschaltung’ lever similar to that familiar to later generations from its application in the Citroen 2CV
Citroën 2CV
The Citroën 2CV |tax horsepower]]”) was an economy car produced by the French automaker Citroën between 1948 and 1990. It was technologically advanced and innovative, but with uncompromisingly utilitarian unconventional looks, and deceptively simple Bauhaus inspired bodywork, that belied the sheer...
and Renault 4
Renault 4
The Renault 4, also known as the 4L , is a hatchback economy car produced by the French automaker Renault between 1961 and 1992. It was the first front-wheel drive family car produced by Renault....
. Towards the end of the production run a four-speed manual box was offered on the Meisterklasse.
The source of this article is wikipedia, the free encyclopedia.  The text of this article is licensed under the GFDL.