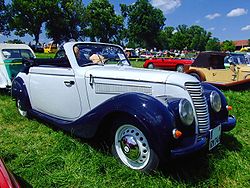 The DKW F8 compact
Compact car
A compact car , or small family car , is a classification of cars which are larger than a supermini but smaller than or equal to a mid-size car...
front-wheel drive
Front-wheel drive
Front-wheel drive is a form of engine/transmission layout used in motor vehicles, where the engine drives the front wheels only. Most modern front-wheel drive vehicles feature a transverse engine, rather than the conventional longitudinal engine arrangement generally found in rear-wheel drive and...
two-stroke engined saloon
Automobile
An automobile, autocar, motor car or car is a wheeled motor vehicle used for transporting passengers, which also carries its own engine or motor...
was introduced by in 1939. The F8 was slightly shorter than its predecessor despite having a marginally increased wheelbase. The base model, known as the Reichsklasse, was manufactured only till 1940 but the Meisterklasse sedan continued in production till 1942. In addition to the saloons, cabriolet (saloon and coupé) versions were offered.

After the war the car reappeared in 1949 as the IFA F8
Industrieverband Fahrzeugbau
Industrieverband Fahrzeugbau , usually abbreviated as IFA, was a conglomerate and a union of companies for vehicle construction in the former East Germany ....
, from the Zwickau
Zwickau
Zwickau in Germany, former seat of the government of the south-western region of the Free State of Saxony, belongs to an industrial and economical core region. Nowadays it is the capital city of the district of Zwickau...
plant operated under Soviet
Soviet Military Administration in Germany
The Soviet Military Administration in Germany was the Soviet military government, headquartered in Berlin-Karlshorst, that directly ruled the Soviet occupation zone of Germany from the German surrender in May 1945 until after the establishment of the German Democratic Republic in October...
control. The factory and operation was reorganized as a Volkseigener Betrieb
Volkseigener Betrieb
The Volkseigener Betrieb was the legal form of industrial enterprise in East Germany...
(or "People Owned Enterprise") Automobilwerke Zwickau (AWZ). The F8 continued in production at Zwickau until approximately 1955: in addition to the sedan and cabriolet bodies, various additional body types available post war included a delivery van
Panel van
A panel van is a form of solid van, smaller than a lorry or truck, without rear side windows...
and estate variant.

The base ‘Reichsklasse’ model had the two-stroke twin-cylinder engine from its predecessor
DKW F7
The DKW F7 is a sub compact front wheel drive saloon launched by Auto Union’s DKW division in 1937 as a replacement for the DKW F5.-The body:Changes between the F5 and the F7 were mostly at a detailed level...
, but fractionally bored out. Engine capacity was now 589 cc. Claimed output and top speed were as before at and 18 bhp (13.2 kW) and 80 km/h (50 mph).

The ‘Meisterklasse’’ version of the DKW F8 also inherited its predecessor’s
DKW F7
The DKW F7 is a sub compact front wheel drive saloon launched by Auto Union’s DKW division in 1937 as a replacement for the DKW F5.-The body:Changes between the F5 and the F7 were mostly at a detailed level...
similarly configured engine of 692 cc. For this engine 20 bhp (14.7 kW) was claimed with a top speed of 85 km/h (53 mph). It was this larger engine that reappeared in the IFA F8 in 1949.

Power was delivered to the front wheels by means of a three-speed manual gear box with a lockable freewheel mechanism
Freewheel
thumb|Freewheel mechanismIn mechanical or automotive engineering, a freewheel or overrunning clutch is a device in a transmission that disengages the driveshaft from the driven shaft when the driven shaft rotates faster than the driveshaft...
on all three ratios. The engine was started using a Dynastart device, which was a combination self starter / alternator.

The body was mounted on a box frame chassis which facilitated the fitting of different body options, such as the light vans and trucks produced during the IFA period. The outer skin of the car comprised a combination of steel panels and, for the central portion, fabric covered timber frame bodywork. After 1953 key panels were made from duroplast
Duroplast
Duroplast is a composite thermosetting plastic, a close relative of formica and bakelite. It is a resin plastic reinforced with fibers making it a fiber-reinforced plastic similar to glass-reinforced plastic.-Uses:...
, reducing the weight of the car and anticipating the light weight technologies that would be applied to Trabant
Trabant
The Trabant is a car that was produced by former East German auto maker VEB Sachsenring Automobilwerke Zwickau in Zwickau, Sachsen. It was the most common vehicle in East Germany, and was also exported to countries both inside and outside the communist bloc...
construction.

The Swiss coachbuilding firm of Holka produced their own bodies for the imported F8 chassis. Importations of F8 chassis began in 1939, and continued till 1944 (despite production having ceased in 1942) in small numbers. In 1944, Holka even designed and produced (in very small quantities) their own version of a cabriolet, formerly imported. The final Holka-bodied car was finished in January 1945.

The F8 had replaced the DKW F7
DKW F7
The DKW F7 is a sub compact front wheel drive saloon launched by Auto Union’s DKW division in 1937 as a replacement for the DKW F5.-The body:Changes between the F5 and the F7 were mostly at a detailed level...
after only a two year model life. The small DKWs were among the best selling small cars in Germany
Germany
Germany , officially the Federal Republic of Germany , is a federal parliamentary republic in Europe. The country consists of 16 states while the capital and largest city is Berlin. Germany covers an area of 357,021 km2 and has a largely temperate seasonal climate...
during the 1930s, and regular model replacement was part of Auto Union's
Auto Union
Auto Union was an amalgamation of four German automobile manufacturers, founded in 1932 and established in 1936 in Chemnitz, Saxony, during the Great Depression. The company has evolved into present day Audi, as a subsidiary of Volkswagen Group....
successful marketing strategy. It seems that the F8 was itself scheduled for relatively rapid replacement by the steel bodied DKW F9
DKW F9
The DKW F9 was the prototype of a car Auto Union intended to launch as a successor to the DKW F8.The small DKWs were among top selling small cars in Germany in the 1930s, and regular model updates were part of the company's strategy for maintaining commercial success in this growing market sector...
. War intervened, however, and production of the Reichsklasse and Cabriolet was ended in 1940. Production of the Meisterklasse continued till 1942. By 1942, when passenger car production at Zwickau was ended, approximately 50,000 F8s had been produced. Sales of new F8 cars and chassis continued until 1944, and the Swiss coachbuilding firm of Holka was still bodying new F8 chassis during 1943 and 1944. That firm even introduced a new cabriolet in 1944, though only a small number were produced. Directly after the war it took some time for DKW production to resume, but prewar F8s did soon appear on German roads: the car had been a big seller before the war and military personnel during the first half of the 1940s had found the modest dimensions and performance of the F8 relatively unappealing.

At the 1947 Leipzig Fair
Leipzig Trade Fair
The Leipzig Trade Fair was a major fair for trade across Central Europe for nearly a millennium. After the Second World War, its location happened to lie within the borders of East Germany, whereupon it became one of the most important trade fairs of Comecon and was traditionally a meeting place...
the car reappeared, badged now as the DKW-IFA F8. Production of the eastern IFA F8 recommenced in or before 1949 at the Auto Union's Zwickau factory which was in the Soviet occupied zone of Germany and was expropriated to become the Volkseigener Betrieb
Volkseigener Betrieb
The Volkseigener Betrieb was the legal form of industrial enterprise in East Germany...
(or "People Owned Enterprise") Automobilwerke Zwickau (AWZ).

It is believed that by 1955 approximately a further 26,000 of the cars had been built. A wider range of body options would be offered with the additions of an estate and the light commercial variants. In 1954 a Cabriolet deluxe was introduced, intended primarily as an export special for the western
West Germany
West Germany is the common English, but not official, name for the Federal Republic of Germany or FRG in the period between its creation in May 1949 to German reunification on 3 October 1990....
market. After the IFA brand had been phased out, the final F8s were evidently badged as Wartburgs. The two-cylinder 700 cc two-stroke engine lived on in the iconic Trabant
Trabant
The Trabant is a car that was produced by former East German auto maker VEB Sachsenring Automobilwerke Zwickau in Zwickau, Sachsen. It was the most common vehicle in East Germany, and was also exported to countries both inside and outside the communist bloc...
.