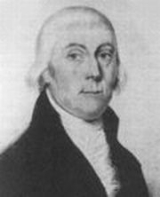 Griffin was born in Farnham, Virginia
Farnham, Virginia
Farnham is an unincorporated community in Richmond County, in the U.S. state of Virginia.-Reference:...
, in 1749. He was educated in England
England
England is a country that is part of the United Kingdom. It shares land borders with Scotland to the north and Wales to the west; the Irish Sea is to the north west, the Celtic Sea to the south west, with the North Sea to the east and the English Channel to the south separating it from continental...
and in Scotland
Scotland
Scotland is a country that is part of the United Kingdom. Occupying the northern third of the island of Great Britain, it shares a border with England to the south and is bounded by the North Sea to the east, the Atlantic Ocean to the north and west, and the North Channel and Irish Sea to the...
at the University of Edinburgh
University of Edinburgh
The University of Edinburgh, founded in 1583, is a public research university located in Edinburgh, the capital of Scotland, and a UNESCO World Heritage Site. The university is deeply embedded in the fabric of the city, with many of the buildings in the historic Old Town belonging to the university...
. While there Griffin married Christina Stewart, oldest daughter of John Stewart, the sixth Earl of Traquair
Earl of Traquair
Earl of Traquair was a title in the Peerage of Scotland. It was created in 1633 for John Stewart, Lord Stewart of Traquair. He had already been created Lord Stewart of Traquair in 1628 and was made Lord Linton and Caberston at the same time as he was given the earldom. These titles were also in the...
(1699–1779). This was done via a secret elopement and escape through the hills of Scotland after the Earl had forbidden contact between Christina and Griffin after the suitor had announced his intentions. Estranged for many years, the Earl reconciled with his daughter via correspondence shortly before his death.

Griffin was engaged in the private practice of law in Lancaster, Virginia
Lancaster, Virginia
Lancaster is an unincorporated community in and the county seat of Lancaster County, Virginia, United States. Lancaster lies along State Route 3. The community is also known as Lancaster Courthouse or by an alternative spelling, Lancaster Court House....
from 1774 to 1777. He was a member of the Virginia House of Delegates
Virginia House of Delegates
The Virginia House of Delegates is the lower house of the Virginia General Assembly. It has 100 members elected for terms of two years; unlike most states, these elections take place during odd-numbered years. The House is presided over by the Speaker of the House, who is elected from among the...
and a delegate to the Continental Congress
Continental Congress
The Continental Congress was a convention of delegates called together from the Thirteen Colonies that became the governing body of the United States during the American Revolution....
from 1778 to 1781, and again from 1787 to 1788, serving as an appeals court judge in the interim. He served as President of Congress
President of the Continental Congress
The President of the Continental Congress was the presiding officer of the Continental Congress, the convention of delegates that emerged as the first national government of the United States during the American Revolution...
from January to November 1788, a mostly ceremonial position with no real authority. Some amateur historians later promoted Griffin and other Presidents of Congress as the original "Presidents of the United States", but the offices are unrelated.

Griffin was president of the Supreme Court of the Admiralty from its creation until its abolition, and was commissioner to the Creek nation in 1789.

Griffin received a recess appointment
Recess appointment
A recess appointment is the appointment, by the President of the United States, of a senior federal official while the U.S. Senate is in recess. The U.S. Constitution requires that the most senior federal officers must be confirmed by the Senate before assuming office, but while the Senate is in...
from President George Washington
George Washington
George Washington was the dominant military and political leader of the new United States of America from 1775 to 1799. He led the American victory over Great Britain in the American Revolutionary War as commander-in-chief of the Continental Army from 1775 to 1783, and presided over the writing of...
on November 28, 1789, to a new seat on the United States District Court for the District of Virginia, created by 1 Stat. 73. Formally nominated on February 8, 1790, Griffin was confirmed by the United States Senate
United States Senate
The United States Senate is the upper house of the bicameral legislature of the United States, and together with the United States House of Representatives comprises the United States Congress. The composition and powers of the Senate are established in Article One of the U.S. Constitution. Each...
on February 10, 1790, and received his commission the same day. He served until his death (in Yorktown, Virginia
Yorktown, Virginia
Yorktown is a census-designated place in York County, Virginia, United States. The population was 220 in the 2000 census. It is the county seat of York County, one of the eight original shires formed in colonial Virginia in 1634....
) on December 14, 1810. He is buried next to his wife in the churchyard at Bruton Parish Church
Bruton Parish Church
Bruton Parish Church is located in the restored area of Colonial Williamsburg in Williamsburg, Virginia, USA. It was established in 1674 in the Virginia Colony, and remains an active Episcopal parish.-History of Bruton Parish Church:...
in Williamsburg, Virginia
Williamsburg, Virginia
Williamsburg is an independent city located on the Virginia Peninsula in the Hampton Roads metropolitan area of Virginia, USA. As of the 2010 Census, the city had an estimated population of 14,068. It is bordered by James City County and York County, and is an independent city...
.