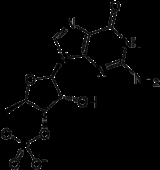 Encyclopedia
Cyclic guanosine monophosphate (cGMP) is a cyclic nucleotide
Cyclic nucleotide
A cyclic nucleotide is any nucleotide in which the phosphate group is bonded to two of the sugar's hydroxyl groups, forming a cyclical or ring structure.These include:* cyclic AMP* cyclic GMP* cyclic ADP-ribose...
derived from guanosine triphosphate
Guanosine triphosphate
Guanosine-5'-triphosphate is a purine nucleoside triphosphate. It can act as a substrate for the synthesis of RNA during the transcription process...
(GTP). cGMP acts as a second messenger much like cyclic AMP. Its most likely mechanism of action is activation of intracellular protein kinase
Protein kinase
A protein kinase is a kinase enzyme that modifies other proteins by chemically adding phosphate groups to them . Phosphorylation usually results in a functional change of the target protein by changing enzyme activity, cellular location, or association with other proteins...
s in response to the binding of membrane
Cell membrane
The cell membrane or plasma membrane is a biological membrane that separates the interior of all cells from the outside environment. The cell membrane is selectively permeable to ions and organic molecules and controls the movement of substances in and out of cells. It basically protects the cell...
-impermeable peptide
Peptide
Peptides are short polymers of amino acid monomers linked by peptide bonds. They are distinguished from proteins on the basis of size, typically containing less than 50 monomer units. The shortest peptides are dipeptides, consisting of two amino acids joined by a single peptide bond...
hormone
Hormone
A hormone is a chemical released by a cell or a gland in one part of the body that sends out messages that affect cells in other parts of the organism. Only a small amount of hormone is required to alter cell metabolism. In essence, it is a chemical messenger that transports a signal from one...
s to the external cell surface.

Guanylate cyclase
Guanylate cyclase
-Reaction:Guanylate cyclase catalyzes the reaction of guanosine triphosphate to 3',5'-cyclic guanosine monophosphate and pyrophosphate:-Types:...
(GC) catalyzes cGMP synthesis. This enzyme converts GTP
Guanosine triphosphate
Guanosine-5'-triphosphate is a purine nucleoside triphosphate. It can act as a substrate for the synthesis of RNA during the transcription process...
to cGMP. In turn, peptide hormones such as the atrial natriuretic factor activate membrane-bound GC, while soluble GC is typically activated by nitric oxide
Nitric oxide
Nitric oxide, also known as nitrogen monoxide, is a diatomic molecule with chemical formula NO. It is a free radical and is an important intermediate in the chemical industry...
to stimulate cGMP synthesis.

cGMP is a common regulator of ion channel
Ion channel
Ion channels are pore-forming proteins that help establish and control the small voltage gradient across the plasma membrane of cells by allowing the flow of ions down their electrochemical gradient. They are present in the membranes that surround all biological cells...
conductance
Conductance
Conductance may refer to:* Electrical conductance, the ability for electricity to flow a certain path* Fluid conductance, the ability for fluid to transmit through materials* Thermal conductivity, the ability for temperatures to transmit through materials...
, glycogenolysis
Glycogenolysis
Glycogenolysis is the conversion of glycogen polymers to glucose monomers. Glycogen is catabolized by removal of a glucose monomer through cleavage with inorganic phosphate to produce glucose-1-phosphate...
, and cellular apoptosis
Apoptosis
Apoptosis is the process of programmed cell death that may occur in multicellular organisms. Biochemical events lead to characteristic cell changes and death. These changes include blebbing, cell shrinkage, nuclear fragmentation, chromatin condensation, and chromosomal DNA fragmentation...
. It also relaxes smooth muscle
Smooth muscle
Smooth muscle is an involuntary non-striated muscle. It is divided into two sub-groups; the single-unit and multiunit smooth muscle. Within single-unit smooth muscle tissues, the autonomic nervous system innervates a single cell within a sheet or bundle and the action potential is propagated by...
tissues. In blood vessel
Blood vessel
The blood vessels are the part of the circulatory system that transports blood throughout the body. There are three major types of blood vessels: the arteries, which carry the blood away from the heart; the capillaries, which enable the actual exchange of water and chemicals between the blood and...
s, relaxation of vascular smooth muscles lead to vasodilation and increased blood flow
Blood flow
Blood flow is the continuous running of blood in the cardiovascular system.The human body is made up of several processes all carrying out various functions. We have the gastrointestinal system which aids the digestion and the absorption of food...
.

cGMP is a secondary messenger in phototransduction
Visual phototransduction
Visual phototransduction is a process by which light is converted into electrical signals in the rod cells, cone cells and photosensitive ganglion cells of the retina of the eye....
in the eye. In the photoreceptors of the mammalian eye, the presence of light activates phosphodiesterase
Phosphodiesterase
A phosphodiesterase is any enzyme that breaks a phosphodiester bond. Usually, people speaking of phosphodiesterase are referring to cyclic nucleotide phosphodiesterases, which have great clinical significance and are described below...
, which degrades cGMP. The sodium ion channel
Sodium ion channel
Sodium channels are integral membrane proteins that form ion channels, conducting sodium ions through a cell's plasma membrane. They are classified according to the trigger that opens the channel for such ions, i.e...
s in photoreceptors are cGMP-gated, so degradation of cGMP causes sodium channels to close, which leads to the hyperpolarization of the photoreceptor's plasma membrane and ultimately to visual information being sent to the brain. GMP and a number of its derivatives also have an umami
Umami
Umami , popularly referred to as savoriness, is one of the five basic tastes together with sweet, sour, bitter, and salty.-Etymology:Umami is a loanword from the Japanese meaning "pleasant savory taste". This particular writing was chosen by Professor Kikunae Ikeda from umai "delicious" and mi ...
taste.

cGMP is also seen to mediate the switching on of the attraction of apical dendrite
Apical dendrite
An apical dendrite is a dendrite that emerges from the apex of a pyramidal cell. Apical dendrites are one of two primary categories of dendrites, and they distinguish the pyramidal cells from spiny stellate cells in the cortices. Pyramidal cells are found in the prefrontal cortex, the hippocampus,...
s of pyramidal cells in cortical layer V
Cerebral cortex
The cerebral cortex is a sheet of neural tissue that is outermost to the cerebrum of the mammalian brain. It plays a key role in memory, attention, perceptual awareness, thought, language, and consciousness. It is constituted of up to six horizontal layers, each of which has a different...
towards semaphorin-3A (Sema3a). Whereas the axons of pyramidal cells are repelled by Sema3a, the apical dendrites are attracted to it. The attraction is mediated by the increased levels of soluble guanylate cyclase
Guanylate cyclase
-Reaction:Guanylate cyclase catalyzes the reaction of guanosine triphosphate to 3',5'-cyclic guanosine monophosphate and pyrophosphate:-Types:...
(SGC) that are present in the apical dendrites. SGC generates cGMP, leading to a sequence of chemical activations that result in the attraction towards Sema3a. The absence of SGC in the axon causes the repulsion from Sema3a. This strategy ensures the structural polarization of pyramidal neurons and takes place in embryonic development.

Phosphodiesterase inhibitor
Phosphodiesterase inhibitor
A phosphodiesterase inhibitor is a drug that blocks one or more of the five subtypes of the enzyme phosphodiesterase , therefore preventing the inactivation of the intracellular second messengers cyclic adenosine monophosphate and cyclic guanosine monophosphate by the respective PDE...
s prevent the degradation of cGMP, thereby enhancing and/or prolonging its effects. For example, Sildenafil
Sildenafil
Sildenafil citrate, sold as Viagra, Revatio and under various other trade names, is a drug used to treat erectile dysfunction and pulmonary arterial hypertension . It was originally developed by British scientists and then brought to market by the US-based pharmaceutical company Pfizer...
(Viagra) and similar drugs enhance the vasodilatory effects of cGMP within the corpus cavernosum
Corpus cavernosum
Corpus cavernosum may refer to:* corpus cavernosum clitoridis* corpus cavernosum penis* "corpus cavernosum urethrae" was used for corpus spongiosum in older texts* corpus cavernosum conchae...
by inhibiting PDE 5 (or PDE V). This is used as a treatment for erectile dysfunction
Erectile dysfunction
Erectile dysfunction is sexual dysfunction characterized by the inability to develop or maintain an erection of the penis during sexual performance....
. However, the drug can inhibit PDE6 in retina (albeit with less affinity than PDE5). This has been shown to result in loss sensitivity but is unlikely to impair common visual tasks, except under conditions of reduced visibility when objects are already near visual threshold. This effect is largely avoided by other PDE5 inhibitors, such as tadalafil
Tadalafil
Tadalafil is a PDE5 inhibitor, currently marketed in pill form for treating erectile dysfunction under the name Cialis; and under the name Adcirca for the treatment of pulmonary arterial hypertension...
.

cGMP is involved in the regulation of some protein-dependent kinases. For example, PKG (protein kinase G) is a dimer
Protein dimer
In biochemistry, a dimer is a macromolecular complex formed by two, usually non-covalently bound, macromolecules like proteins or nucleic acids...
consisting of one catalytic
Catalysis
Catalysis is the change in rate of a chemical reaction due to the participation of a substance called a catalyst. Unlike other reagents that participate in the chemical reaction, a catalyst is not consumed by the reaction itself. A catalyst may participate in multiple chemical transformations....
and one regulatory unit, with the regulatory units blocking the active site
Active site
In biology the active site is part of an enzyme where substrates bind and undergo a chemical reaction. The majority of enzymes are proteins but RNA enzymes called ribozymes also exist. The active site of an enzyme is usually found in a cleft or pocket that is lined by amino acid residues that...
s of the catalytic units.