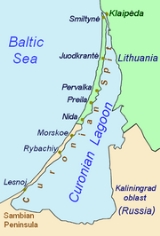 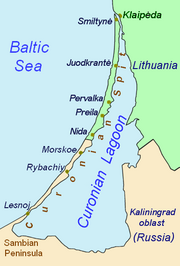 The Curonian Lagoon is separated from the Baltic Sea
Baltic Sea
The Baltic Sea is a brackish mediterranean sea located in Northern Europe, from 53°N to 66°N latitude and from 20°E to 26°E longitude. It is bounded by the Scandinavian Peninsula, the mainland of Europe, and the Danish islands. It drains into the Kattegat by way of the Øresund, the Great Belt and...
by the Curonian Spit
Curonian Spit
The Curonian Spit is a 98 km long, thin, curved sand-dune spit that separates the Curonian Lagoon from the Baltic Sea coast. Its southern portion lies within Kaliningrad Oblast, Russia and its northern within southwestern Lithuania...
. Its surface area is 1619 square kilometres (625.1 sq mi). The Neman River
Neman River
Neman or Niemen or Nemunas, is a major Eastern European river rising in Belarus and flowing through Lithuania before draining into the Curonian Lagoon and then into the Baltic Sea at Klaipėda. It is the northern border between Lithuania and Russia's Kaliningrad Oblast in its lower reaches...
supplies about 90% of its inflows; its watershed consists of about 100,450 square kilometers in Lithuania
Lithuania
Lithuania , officially the Republic of Lithuania is a country in Northern Europe, the biggest of the three Baltic states. It is situated along the southeastern shore of the Baltic Sea, whereby to the west lie Sweden and Denmark...
and the Kaliningrad Oblast
Kaliningrad Oblast
Kaliningrad Oblast is a federal subject of Russia situated on the Baltic coast. It has a population of The oblast forms the westernmost part of the Russian Federation, but it has no land connection to the rest of Russia. Since its creation it has been an exclave of the Russian SFSR and then the...
. 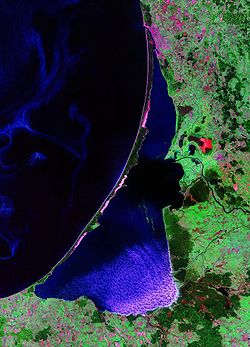 In the 13th century, the area around the lagoon was part of the ancestral lands of the Curonians
Curonians
The Curonians or Kurs were a Baltic tribe living on the shores of the Baltic sea in what are now the western parts of Latvia and Lithuania from the 5th to the 16th centuries, when they merged with other Baltic tribes. They gave their name to the region of Courland , and they spoke the Old...
and Old Prussian people. Later it bordered the historical region of Lithuania Minor
Lithuania Minor
Lithuania Minor or Prussian Lithuania is a historical ethnographic region of Prussia, later East Prussia in Germany, where Prussian Lithuanians or Lietuvininkai lived. Lithuania Minor enclosed the northern part of this province and got its name due to the territory's substantial...
. At the northern end of the Spit, there is a passage to the Baltic Sea
Baltic Sea
The Baltic Sea is a brackish mediterranean sea located in Northern Europe, from 53°N to 66°N latitude and from 20°E to 26°E longitude. It is bounded by the Scandinavian Peninsula, the mainland of Europe, and the Danish islands. It drains into the Kattegat by way of the Øresund, the Great Belt and...
, and the place was chosen by the Teutonic Knights
Teutonic Knights
The Order of Brothers of the German House of Saint Mary in Jerusalem , commonly the Teutonic Order , is a German medieval military order, in modern times a purely religious Catholic order...
in 1252 to found Memelburg castle and the city of Memel. The town is officially called Klaipėda
Klaipeda
Klaipėda is a city in Lithuania situated at the mouth of the Nemunas River where it flows into the Baltic Sea. It is the third largest city in Lithuania and the capital of Klaipėda County....
since 1923 when the Memel Territory was separated from the German Empire
German Empire
The German Empire refers to Germany during the "Second Reich" period from the unification of Germany and proclamation of Wilhelm I as German Emperor on 18 January 1871, to 1918, when it became a federal republic after defeat in World War I and the abdication of the Emperor, Wilhelm II.The German...
.

As the new Interwar border, the river that flows into the Curonian
Courland
Courland is one of the historical and cultural regions of Latvia. The regions of Semigallia and Selonia are sometimes considered as part of Courland.- Geography and climate :...
Lagoon
Lagoon
A lagoon is a body of shallow sea water or brackish water separated from the sea by some form of barrier. The EU's habitat directive defines lagoons as "expanses of shallow coastal salt water, of varying salinity or water volume, wholly or partially separated from the sea by sand banks or shingle,...
near Rusnė
Rusne
Rusnė is a town in Šilutė district, Lithuania, located on the Rusnė Island in the Nemunas Delta, 9 km south-west from Šilutė.Rusnė was first mentioned in historical sources in 14th century. In 1419 the first church was built in Rusnė, and in 1553 a Lithuanian parish school was established...
was chosen. The river's lower 120 km in Germany were called die Memel by Germans, while the upper part located in Lithuania was known as Nemunas River. The border also separated the peninsula near the small holiday resort of Nida, Lithuania ; the southern part of the Spit and the Lagoon remained in Germany until 1945.

This border remains today, as after World War II
World War II
World War II, or the Second World War , was a global conflict lasting from 1939 to 1945, involving most of the world's nations—including all of the great powers—eventually forming two opposing military alliances: the Allies and the Axis...
, the southern end of the Spit and the German area south of the river, the part of East Prussia
East Prussia
East Prussia is the main part of the region of Prussia along the southeastern Baltic Coast from the 13th century to the end of World War II in May 1945. From 1772–1829 and 1878–1945, the Province of East Prussia was part of the German state of Prussia. The capital city was Königsberg.East Prussia...
with the town Königsberg
Königsberg
Königsberg was the capital of East Prussia from the Late Middle Ages until 1945 as well as the northernmost and easternmost German city with 286,666 inhabitants . Due to the multicultural society in and around the city, there are several local names for it...
located in Sambia
Sambia
Sambia or Samland is a peninsula in the Kaliningrad Oblast of Russia, on the southeastern shore of the Baltic Sea. The Curonian Lagoon and the Vistula Lagoon demarcate the peninsula. Prior to 1945 it formed an important part of East Prussia.-Names:Sambia is named after the Sambians, an extinct...
, became part an exclave of Russia
Russia
Russia or , officially known as both Russia and the Russian Federation , is a country in northern Eurasia. It is a federal semi-presidential republic, comprising 83 federal subjects...
called Kaliningrad Oblast
Kaliningrad Oblast
Kaliningrad Oblast is a federal subject of Russia situated on the Baltic coast. It has a population of The oblast forms the westernmost part of the Russian Federation, but it has no land connection to the rest of Russia. Since its creation it has been an exclave of the Russian SFSR and then the...
.

The Lagoon, formed about 7,000 years BCE, is classified as brackish. Water depths average 3.8 meters. It is highly biodiverse, although troubled by water pollution
Water pollution
Water pollution is the contamination of water bodies . Water pollution occurs when pollutants are discharged directly or indirectly into water bodies without adequate treatment to remove harmful compounds....
. The presence of algal blooms
Algal bloom
An algal bloom is a rapid increase or accumulation in the population of algae in an aquatic system. Algal blooms may occur in freshwater as well as marine environments. Typically, only one or a small number of phytoplankton species are involved, and some blooms may be recognized by discoloration...
was confirmed in the 2000s.