Encyclopedia
The Indian Sunbeam, Curetis thetis is a species of lycaenid
Lycaenidae
The Lycaenidae are the second-largest family of butterflies, with about 6000 species worldwide, whose members are also called gossamer-winged butterflies...
or blue butterfly found in Asia.

The butterfly occurs in Peninsular India, south of the Himalayas, but not in the desert tracts or in areas with a scanty rainfall; parts of Assam; Saurashtra; Bengal, Sylhet onto Myanmar
Myanmar
Burma , officially the Republic of the Union of Myanmar , is a country in Southeast Asia. Burma is bordered by China on the northeast, Laos on the east, Thailand on the southeast, Bangladesh on the west, India on the northwest, the Bay of Bengal to the southwest, and the Andaman Sea on the south....
. It is also found in the Nicobar islands
Nicobar Islands
The Nicobar Islands are an archipelagic island chain in the eastern Indian Ocean...
.

It is also found in Sri Lanka
Sri Lanka
Sri Lanka, officially the Democratic Socialist Republic of Sri Lanka is a country off the southern coast of the Indian subcontinent. Known until 1972 as Ceylon , Sri Lanka is an island surrounded by the Indian Ocean, the Gulf of Mannar and the Palk Strait, and lies in the vicinity of India and the...
, Java
Java
Java is an island of Indonesia. With a population of 135 million , it is the world's most populous island, and one of the most densely populated regions in the world. It is home to 60% of Indonesia's population. The Indonesian capital city, Jakarta, is in west Java...
, Philippines
Philippines
The Philippines , officially known as the Republic of the Philippines , is a country in Southeast Asia in the western Pacific Ocean. To its north across the Luzon Strait lies Taiwan. West across the South China Sea sits Vietnam...
, North Sulawesi
Sulawesi
Sulawesi is one of the four larger Sunda Islands of Indonesia and is situated between Borneo and the Maluku Islands. In Indonesia, only Sumatra, Borneo, and Papua are larger in territory, and only Java and Sumatra have larger Indonesian populations.- Etymology :The Portuguese were the first to...
and Selajar. 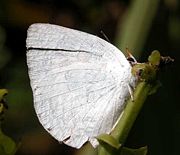 Underside: shining silvery white. Fore and hind wings crossed transversely by discal
Glossary of Lepidopteran terms
This glossary describes the terms used in the formal descriptions of insect species, jargon used mostly by professionals or entomologist....
and inner subterminal, somewhat lunular dark lines and a more or less obsolescent outer sub-terminal line of minute dark dots. These markings generally very indistinct but traceable; in some specimens more clearly defined but never prominent. Antennae, bead, thorax and abdomen dusky black; the antennae reddish at apex; in some specimens the head, the thorax laterally and the base of the abdomen brownish mouse-colour; beneath : the palpi, thorax and the basal half of the abdomen medially silvery white, the sides and apex of the abdomen dusky black.

Upperside: fore wing dark brownish-black; a large medial patch that extends from vein 1 to vein 4, enters the lower half of the cell and extends from base outwards for about two-thirds the length of the wing, white ; at the base of the wing this patch is shaded and obscured for a short distance by dusky black. Hind wing: pale dusky black; a darker, short, broad brownish-black streak from base along the subcostal vein, that outwardly broadens into an irregularly round patch beyond which is a broad short upper discal white band with ill-defined and somewhat diffuse margins. Cilia, fore and hind wings: white. Underside: as in the male but the markings still more indistinct, and in almost no specimen is there any trace of the outer subtermmal line of dark dots.

Variety arcuata Moore
Frederic Moore
Frederic Moore FZS was a British entomologist. It has been said that Moore was born at 33 Bruton Street but may be incorrect given that this was the address of the menagerie and office of the Zoological Society of London from 1826 to 1836.Moore was appointed an assistant in the East India Company...
, differs from typical thetis as follows:

Upperside: ground-colour similar but of a slightly paler shade in all the specimens I have seen. Fore wing: costal and terminal margins edged more broadly with black than in thetis, the inner margin of this colour forms a regular strongly curved arch from base of wing to tornus, not angulate at all opposite apex of wing, the edging of the costal margin not jagged on the inner side. Hind wing: the costal margin not pale but somewhat broadly dusky black; the terminal black edging broader than in thetis, not linear, produced for a very short distance up each vein. The irroration of dusky scales at the bases of both fore and hind wings and along the dorsal area of the hind wing heavier and more broadly diffused, especially on the latter. Underside: as in the typical form. Antenna, head, thorax and abdomen similar.

Upperside: ground-colour darker brownish-black, deep opaque black on the costa, apex and termen of the fore wing; the medial oval white patch on the fore wing smaller, the upper discal white band on the hind wing narrower, the short, broad black streak from base terminates in a large round spot or patch inwardly merged in the ground-colour which fills the whole area of the cell.

There have been reports of gynandromorph
Gynandromorph
A gynandromorph is an organism that contains both male and female characteristics. The term gynandromorph, from Greek "gyne" female and "andro" male, is mainly used in the field of Lepidopterology or entomology...
ic forms.

The larva has been recorded as feeding on Pongamia glabra, Derris scandens, Abrus precatorius (Leguminosae), Xylia dolabriformis and Heynia trijuga (Meliaceae
Meliaceae
The Meliaceae, or the Mahogany family, is a flowering plant family of mostly trees and shrubs in the order Sapindales....
).

Mr. de Niceville goes on to say that the sheaths of the tentacles on the twelfth segment are pale green, the tentacles themselves maroon, the whorl of hairs at their apices white with their basal thirds black.

The larvae have tentacular organs as seen on myrmecophilous
Myrmecophily
Myrmecophily is the term applied to positive interspecies associations between ants and a variety of other organisms such as plants, arthropods, and fungi...
lycaenids, but they have not been observed to be tended by ants.

Light green; wing-cases bluish green. "There is a conspicuous heart-shaped pale ochreous mark on the top of the thorax, the pits on it filled in with reddish pigment." (de Nicéville.) The pupae are capable of producing sounds and the function of these are not fully understood.
The source of this article is wikipedia, the free encyclopedia.  The text of this article is licensed under the GFDL.