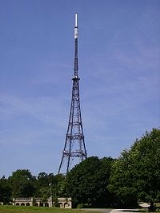 Encyclopedia
The Crystal Palace transmitting station is a broadcasting
Broadcasting
Broadcasting is the distribution of audio and video content to a dispersed audience via any audio visual medium. Receiving parties may include the general public or a relatively large subset of thereof...
and telecommunications site in the Crystal Palace area
Crystal Palace, London
Crystal Palace is a residential area in south London, England named from the former local landmark, The Crystal Palace, which occupied the area from 1854 to 1936. The area is located approximately 8 miles south east of Charing Cross, and offers impressive views over the capital...
of the London Borough of Bromley
London Borough of Bromley
The London Borough of Bromley is a London borough of south east London, England and forms part of Outer London. The principal town in the borough is Bromley.-Geography:...
, England
England
England is a country that is part of the United Kingdom. It shares land borders with Scotland to the north and Wales to the west; the Irish Sea is to the north west, the Celtic Sea to the south west, with the North Sea to the east and the English Channel to the south separating it from continental...
.

Its tower is the third-tallest structure in London. The station is best known as the main television
Television
Television is a telecommunication medium for transmitting and receiving moving images that can be monochrome or colored, with accompanying sound...
transmitter for the London area.

The station was constructed in the mid-1950s among the ruins of the Crystal Palace
The Crystal Palace
The Crystal Palace was a cast-iron and glass building originally erected in Hyde Park, London, England, to house the Great Exhibition of 1851. More than 14,000 exhibitors from around the world gathered in the Palace's of exhibition space to display examples of the latest technology developed in...
. The Aquarium
Aquarium
An aquarium is a vivarium consisting of at least one transparent side in which water-dwelling plants or animals are kept. Fishkeepers use aquaria to keep fish, invertebrates, amphibians, marine mammals, turtles, and aquatic plants...
on which it is mostly built was partially destroyed in 1941 during the demolition of the Palace's north water tower. (John Logie Baird
John Logie Baird
John Logie Baird FRSE was a Scottish engineer and inventor of the world's first practical, publicly demonstrated television system, and also the world's first fully electronic colour television tube...
's earlier transmitter and TV studios were a separate development at the other end of the Palace and perished with it in 1936.)

Its new 219 metres (719 ft) tower was the tallest structure in London until the construction of One Canada Square
One Canada Square
One Canada Square is a skyscraper in Canary Wharf in the London Borough of Tower Hamlets. It is the tallest completed building in the United Kingdom since 1991, standing at above ground level and containing 50 storeys...
at Canary Wharf
Canary Wharf
Canary Wharf is a major business district located in London, United Kingdom. It is one of London's two main financial centres, alongside the traditional City of London, and contains many of the UK's tallest buildings, including the second-tallest , One Canada Square...
in 1991. Despite its size, it has been largely overlooked as a London landmark due to its location and simplicity. It has been nicknamed London's Eiffel Tower
Eiffel Tower
The Eiffel Tower is a puddle iron lattice tower located on the Champ de Mars in Paris. Built in 1889, it has become both a global icon of France and one of the most recognizable structures in the world...
.

When first constructed it only transmitted BBC Television on the old VHF 405-line
405-line
The 405-line monochrome analogue television broadcasting system was the first fully electronic television system to be used in regular broadcasting....
system. The Croydon transmitter
Croydon Transmitter
The Croydon transmitting station is a broadcasting and telecommunications facility located on Beulah Hill in Upper Norwood, London, England , in the London Borough of Croydon, owned by Arqiva. It was founded in 1955 and initially used a small lattice tower...
was then built to broadcast ITV
ITV
ITV is the major commercial public service TV network in the United Kingdom. Launched in 1955 under the auspices of the Independent Television Authority to provide competition to the BBC, it is also the oldest commercial network in the UK...
. When UHF
Ultra high frequency
Ultra-High Frequency designates the ITU Radio frequency range of electromagnetic waves between 300 MHz and 3 GHz , also known as the decimetre band or decimetre wave as the wavelengths range from one to ten decimetres...
transmissions started in 1964 first the new BBC2 and later both ITV and BBC1 were then transmitted from Crystal Palace. However, even now Crystal Palace does not transmit analogue Channel 5, this (alone) comes from Croydon about two miles away (although Croydon does have reserve transmitters for ITV and Channel 4, which are only used in the event of a fault or maintenance at Crystal Palace). A couple of years ago the BBC decided that a complete reserve was also a good idea and now all four services are available from Croydon if required. When UK Digital Switch Over is completed in the London area in 2012 all services will come from Crystal Palace again, but because of the site's importance Croydon will be able to be used to duplicate the PSB multiplexes in case of emergency. 405-line VHF television was discontinued in 1985, and now the only television broadcasts from Crystal Palace are on UHF.

Since 1995, the tower has also been in use as one of five London transmitters for the BBC
BBC
The British Broadcasting Corporation is a British public service broadcaster. Its headquarters is at Broadcasting House in the City of Westminster, London. It is the largest broadcaster in the world, with about 23,000 staff...
DAB
Digital audio broadcasting
Digital Audio Broadcasting is a digital radio technology for broadcasting radio stations, used in several countries, particularly in Europe. As of 2006, approximately 1,000 stations worldwide broadcast in the DAB format....
multiplex
Multiplexing
The multiplexed signal is transmitted over a communication channel, which may be a physical transmission medium. The multiplexing divides the capacity of the low-level communication channel into several higher-level logical channels, one for each message signal or data stream to be transferred...
. This was joined in 1999 by the Digital One
Digital One
Digital One is a national commercial digital radio multiplex in the United Kingdom, owned by Arqiva. , the multiplex covers more than 90% of the populationfrom a total of 137 transmitters...
DAB service, and a further local DAB multiplex has also since started transmitting.

In May 2006, Crystal Palace began broadcasting the first terrestrial HDTV
High-definition television
High-definition television is video that has resolution substantially higher than that of traditional television systems . HDTV has one or two million pixels per frame, roughly five times that of SD...
signals in the UK. This was to enable a trial group of 450 London homes to test HD broadcasts by the BBC, ITV, Channel 4 and Five, in order to assess the viability and potential problems of future nationwide HD broadcasting. On 2 December 2009, the site entered service as one of the first DVB-T2
DVB-T2
DVB-T2 is an abbreviation for Digital Video Broadcasting – Second Generation Terrestrial; it is the extension of the television standard DVB-T, issued by the consortium DVB, devised for the broadcast transmission of digital terrestrial television....
transmitters in the world, carrying a variant of the BBC's Multiplex B broadcasting high-definition TV services.

The UK Government's plans for digital switchover are based on the use of almost all of the UK's current analogue TV transmitter sites. As such, Crystal Palace is expected to remain a key part of the network when the London area is switched over in 2012. In July 2007 it was confirmed by Ofcom that Crystal Palace would be remaining an A group transmitter after DSO (Digital Switchover).