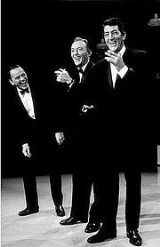 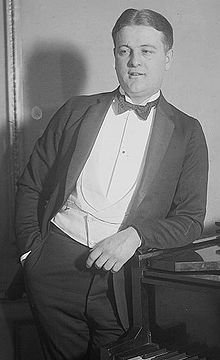 Crooner is an American epithet
Epithet
An epithet or byname is a descriptive term accompanying or occurring in place of a name and having entered common usage. It has various shades of meaning when applied to seemingly real or fictitious people, divinities, objects, and binomial nomenclature. It is also a descriptive title...
given to male singers of pop standards, mostly from the Great American Songbook
Great American Songbook
The Great American Songbook is a hypothetical construct that seeks to represent the best American songs of the 20th century principally from Broadway theatre, musical theatre, and Hollywood musicals, from the 1920s to 1960, including dozens of songs of enduring popularity...
, either backed by a full orchestra
Orchestra
An orchestra is a sizable instrumental ensemble that contains sections of string, brass, woodwind, and percussion instruments. The term orchestra derives from the Greek ορχήστρα, the name for the area in front of an ancient Greek stage reserved for the Greek chorus...
, a big band
Big band
A big band is a type of musical ensemble associated with jazz and the Swing Era typically consisting of rhythm, brass, and woodwind instruments totaling approximately twelve to twenty-five musicians...
or by a piano. Originally it was an ironic term denoting an emphatically sentimental, often emotional singing style made possible by the use of microphones. Some performers, such as Russ Colombo, did not accept the term: in an interview Frank Sinatra
Frank Sinatra
Francis Albert "Frank" Sinatra was an American singer and actor.Beginning his musical career in the swing era with Harry James and Tommy Dorsey, Sinatra became an unprecedentedly successful solo artist in the early to mid-1940s, after being signed to Columbia Records in 1943. Being the idol of the...
said that he did not consider himself or Bing Crosby
Bing Crosby
Harry Lillis "Bing" Crosby was an American singer and actor. Crosby's trademark bass-baritone voice made him one of the best-selling recording artists of the 20th century, with over half a billion records in circulation....
"crooners". Crosby's radio show
Radio programming
Radio programming is the Broadcast programming of a Radio format or content that is organized for Commercial broadcasting and Public broadcasting radio stations....
, Kraft Music Hall
Kraft Music Hall
The Kraft Music Hall was a popular variety program, featuring top show business entertainers, which aired on NBC radio and television from 1933 to 1971....
(1935–1946), was heard by 50 million listeners every Thursday evening.

This dominant popular vocal style coincided with the advent of radio broadcasting and electrical recording. Before the advent of the microphone
Microphone
A microphone is an acoustic-to-electric transducer or sensor that converts sound into an electrical signal. In 1877, Emile Berliner invented the first microphone used as a telephone voice transmitter...
, popular singers like Al Jolson
Al Jolson
Al Jolson was an American singer, comedian and actor. In his heyday, he was dubbed "The World's Greatest Entertainer"....
had to project to the rear seats of a theater, as did opera singers, which made for a very loud vocal style. The microphone made possible the more personal style. Al Bowlly
Al Bowlly
Albert Allick Bowlly was a Southern-African singer, songwriter, composer and band leader, who became a popular Jazz crooner during the 1930s in the United Kingdom and later, in the United States of America. He recorded more than 1,000 records between 1927 and 1941...
and Gene Austin
Gene Austin
Gene Austin was an American singer and songwriter, one of the first "crooners". His 1920s compositions "When My Sugar Walks Down the Street" and "The Lonesome Road" became pop and jazz standards.-Career:...
are often credited as inventors of the crooning style but Rudy Vallée
Rudy Vallée
Rudy Vallée was an American singer, actor, bandleader, and entertainer.-Early life:Born Hubert Prior Vallée in Island Pond, Vermont, the son of Charles Alphonse and Catherine Lynch Vallée...
became far more popular, beginning from 1928. He could be heard by anyone with a phonograph or a radio.

"In his popular radio program, which began with his floating greeting, 'Heigh ho, everybody,' beamed in from a New York City night club, he stood like a statue, surrounded by clean-cut collegiate band musicians and cradling a saxophone in his arms."


His first film, The Vagabond Lover, was promoted with the line, "Men Hate Him! Women Love Him!" while his success brought press warnings of the "Vallee Peril": this "punk from Maine" with the "dripping voice" required mounted police to beat back screaming, swooning females at his vaudeville shows.

By the early 1930s the term "crooner" had taken on a pejorative connotation, both Cardinal O'Connell
William Henry O'Connell
William Henry O'Connell was an American cardinal of the Roman Catholic Church. He served as Archbishop of Boston from 1907 until his death, and was elevated to the cardinalate in 1911.-Early life:...
of Boston
Boston
Boston is the capital of and largest city in Massachusetts, and is one of the oldest cities in the United States. The largest city in New England, Boston is regarded as the unofficial "Capital of New England" for its economic and cultural impact on the entire New England region. The city proper had...
and the New York Singing Teachers Association publicly denouncing the vocal form, O'Connell calling it "base", "degenerate", "defiling" and un-American and the NYSTA adding "corrupt". Even The New York Times
The New York Times
The New York Times is an American daily newspaper founded and continuously published in New York City since 1851. The New York Times has won 106 Pulitzer Prizes, the most of any news organization...
predicted that crooning would be just a passing fad. The newspaper printed, "They sing like that because they can’t help it. Their style is begging to go out of fashion…. Crooners will soon go the way of tandem bicycles, mah jongg and midget golf." Voice range shifted from tenor
Tenor
The tenor is a type of male singing voice and is the highest male voice within the modal register. The typical tenor voice lies between C3, the C one octave below middle C, to the A above middle C in choral music, and up to high C in solo work. The low extreme for tenors is roughly B2...
(Vallée) to baritone
Baritone
Baritone is a type of male singing voice that lies between the bass and tenor voices. It is the most common male voice. Originally from the Greek , meaning deep sounding, music for this voice is typically written in the range from the second F below middle C to the F above middle C Baritone (or...
(Russ Columbo
Russ Columbo
Ruggiero Eugenio di Rodolpho Colombo , known as Russ Columbo, was an American singer, violinist and actor, most famous for his signature tune, "You Call It Madness, But I Call It Love", his compositions "Prisoner of Love" and "Too Beautiful For Words", and the legend surrounding his early...
, Bing Crosby
Bing Crosby
Harry Lillis "Bing" Crosby was an American singer and actor. Crosby's trademark bass-baritone voice made him one of the best-selling recording artists of the 20th century, with over half a billion records in circulation....
). Still, a 1931 record by Dick Robinson, Crosby, Columbo & Vallee, called upon men to fight "these public enemies" brought into homes via radio.

The genre enjoyed popularity within the former Soviet Union
Soviet Union
The Soviet Union , officially the Union of Soviet Socialist Republics , was a constitutionally socialist state that existed in Eurasia between 1922 and 1991....
with Leonid Utyosov
Leonid Utyosov
Leonid Osipovich Utyosov or Utesov ; real name Lazar Vaysbeyn or Weissbein , was a famous Soviet jazz singer and comic actor of jewish origin, who became the first pop singer to be awarded the prestigious title of People's Artist of the USSR .-Biography:Leonid Utyosov was brought up in Odessa...
, Georg Ots
Georg Ots
Georg Ots, People's Artist of the USSR was an Estonian opera singer...
, Oleg Anofriyev
Oleg Anofriyev
Oleg Andreyevich Anofriyev is a Soviet and Russian stage and screen actor, voice actor, singer, songwriter, film director, poet. He was born in Gelendzhik, but spent all his life in Moscow and graduated from Moscow Art Theatre in 1954...
and Muslim Magomayev leading the way. Their performances had a variety of influences including ballads and swing and was included in popular film soundtracks.