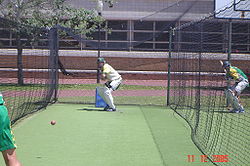 Cricket nets are practice nets used by batsmen and bowlers to warm up and/or improve their cricket
Cricket
Cricket is a bat-and-ball game played between two teams of 11 players on an oval-shaped field, at the centre of which is a rectangular 22-yard long pitch. One team bats, trying to score as many runs as possible while the other team bowls and fields, trying to dismiss the batsmen and thus limit the...
ing techniques. Cricket nets consist of a cricket pitch
Cricket pitch
In the game of cricket, the cricket pitch consists of the central strip of the cricket field between the wickets - 1 chain or 22 yards long and 10 feet wide. The surface is very flat and normally covered with extremely short grass though this grass is soon removed by wear at the ends of the...
(natural or artificial) which is enclosed by cricket nets on either side, to the rear and optionally the roof. The bowling end of the net is left open. Cricket nets are the cricket equivalent of baseball's
Baseball
Baseball is a bat-and-ball sport played between two teams of nine players each. The aim is to score runs by hitting a thrown ball with a bat and touching a series of four bases arranged at the corners of a ninety-foot diamond...
batting cage
Batting cage
A batting cage is an enclosed cage for baseball players to practice the skill of batting.It is usually made of netting or a chain-link fence and rectangular in shape. A batter stands at one end of the cage, with a pitching machine at the opposing end...
s, though fundamentally different, as baseball cages provide complete ball containment, whereas cricket nets do not.

Cricket
Cricket
Cricket is a bat-and-ball game played between two teams of 11 players on an oval-shaped field, at the centre of which is a rectangular 22-yard long pitch. One team bats, trying to score as many runs as possible while the other team bowls and fields, trying to dismiss the batsmen and thus limit the...
nets serve to stop the ball travelling across a field when the batsman plays a shot - saving time and eliminating the need for fielders
Fielding (cricket)
Fielding in the sport of cricket is the action of fielders in collecting the ball after it is struck by the batsman, in such a way as to either limit the number of runs that the batsman scores or get the batsman out by catching the ball in flight or running the batsman out.Cricket fielding position...
. They also negate the need for a wicket keeper should ball travel past the bat. They allow greater intensity of training, specifically when multiple lane cricket nets are used. Cricket nets allow solitary batting practise when used with a bowling machine
Bowling machine
In cricket a bowling machine is a device which enables a batsman to practice and to hone specific skills through repetition of the ball being bowled at a certain length, line and speed...
.

Cricket nets are fundamental to the cricket practise and are used at every level of cricket. Professional cricket establishments are likely to have over 10 lanes of nets, and have the capacity to practise indoors and outdoor. Cricket nets are also very prevalent in educational establishments; including schools, colleges and universities. They are particularly desirable in these fields as they allow safe and efficient training with a high volume of pupils where there are significant constraints on time. Completing the spectrum is their use as garden cricket nets. Cricket nets are very common site in the gardens of keen cricketers and are probably rightfully considered highly important to the development of young cricket players.

There is also a safety element that cricket nets bring. By containing the majority of aerial cricket balls, cricket nets nullify the danger of potential injury occurring from 4¾ oz and 5½ oz cricket balls striking people who are within range of the batsman. Though due to the practical requirement of having an opening in the net (for the bowler to bowl) it is still common for balls to exit the net, as such shouts of heads up are commonly heard.

Indoor cricket nets differ significantly from outdoor nets. They are often suspended on an aluminium track way (runners) which are fixed to the ceiling of sports hall or gym
Gym
The word γυμνάσιον was used in Ancient Greece, that mean a locality for both physical and intellectual education of young men...
nasium. The nets can then drop 8–4 metres to reach the ground, before travelling at least 20 metres laterally, which provides a substantial practise enclosure. Indoors nets are commonly multi lane, with 2 or 4 bay nets being particularly common. Unlike outdoor cricket nets where the netting is black, indoor nets tend to be white. They have a separate canvas screen which enclose the area immediately surrounding the batsman and rise to a height of 3 metres. The purpose of this is twofold; the netting to the sides and rear of the batsman has by far the highest work rate, canvas is significantly more durable to tradition mesh netting and as such the use of screens improves the life span of the net. The second is from a simply privacy aspect - the impression of seclusion allows for more focused batsman and reduces the risk of distractions. Indoor cricket nets will be found in almost all sports halls and gyms where the suspension on runners provides a curtain type system for the nets and allows the nets to be pulled in and out of use. The flexible nature of these nets allows for multi sport use of sports halls which is fundamental to the success of all commercially operated sports centres.

Tension cricket nets are another form of indoor nets. These nets are specific for a form of the game which is played indoors. Populated in Australia who are the reigning champions in both men and women, indoor cricket
Indoor cricket
Indoor cricket is a variant of and shares many basic concepts with cricket. The game is most often played between two teams each consisting of eight players, in matches featuring two innings of sixteen 7-ball overs each...
now spans all cricket playing nations. Within the UK indoor cricket is not overly prevalent, this is partly due to advanced cricket net systems being required of which there is only one accredited installer in the northern hemisphere - Edwards

Outdoor cricket nets are the standard and most common form of practise nets. They take shape and form in many different guises, with some nets being home made whilst others are professional manufactured and installed, and this is reflected throughout the world. Regardless of their design and construction, outdoor crickets all have the same purpose of allowing batting and bowling practise within a enclosed space where the ball is contained. The design and construction of outdoor cricket nets tends to be based around two factors; the frequency and age of those who will use it, and also the space which is available. In schools and cricket clubs where levels of use will be high the construction of the cricket cage will be tailored to suit these requirements. A further unfortunate consideration has to be made into the likelihood that the cricket nets will be subject to misuse or vandalism. Therefore the frames of cricket cages are often constructed out of heavy duty galvanized steel
Steel
Steel is an alloy that consists mostly of iron and has a carbon content between 0.2% and 2.1% by weight, depending on the grade. Carbon is the most common alloying material for iron, but various other alloying elements are used, such as manganese, chromium, vanadium, and tungsten...
with an overall diameter ranging from 34mm - 50mm, the steel tube is then joined by galvanised key-clamp brackets. This system requires ground sockets to be concreted into the ground, although these cannot be removed the actual frame of the cage can still be dismantled. There are variations in the design of outdoor nets such as a pulley
Pulley
A pulley, also called a sheave or a drum, is a mechanism composed of a wheel on an axle or shaft that may have a groove between two flanges around its circumference. A rope, cable, belt, or chain usually runs over the wheel and inside the groove, if present...
and ratchet
Ratchet (device)
A ratchet is a device that allows continuous linear or rotary motion in only one direction while preventing motion in the opposite direction. Because most socket wrenches today use ratcheting handles, the term "ratchet" alone is often used to refer to a ratcheting wrench, and the terms "ratchet"...
system where the net is mounted on a cable which spans posts located at either end of the practise net. Garden cricket nets are frequently DIY and quite often take the form of a professional design with locally sourced components. This occurs primarily due to cost implications, but also due to the fact cricket nets are fundamentally simple in design and purpose and thus greatly increase the feasibility of constructing a home made cricket net. There are few rules of thumb to follow particularly with size. The width should be no less than 9 ft, with 12 ft being optimum. The height should be no less than 9 ft if the length of net is longer than 24 ft, this is increased to 10 ft up to a length of 36 ft and nets with roof lengths beyond 36 ft should have a net height of 12 ft - this is to prevent balls ending up on the roof of the cricket net after being bowled. The length of the net is flexible, however the longer the net the more ball containment and the safer the surround training area is. There is a further type of outdoor cricket nets, this is a mobile cricket net. A steel framed cricket cage can be adapted with wheels to allow them to be become completely portable.