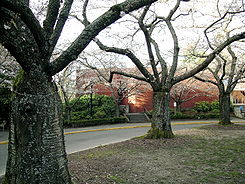 Twine is a light string or strong thread composed of two or more smaller strands or yarn
Yarn
Yarn is a long continuous length of interlocked fibres, suitable for use in the production of textiles, sewing, crocheting, knitting, weaving, embroidery and ropemaking. Thread is a type of yarn intended for sewing by hand or machine. Modern manufactured sewing threads may be finished with wax or...
s twisted together. More generally, the term can be applied to any thin cord
Rope
A rope is a length of fibres, twisted or braided together to improve strength for pulling and connecting. It has tensile strength but is too flexible to provide compressive strength...
.

Natural fibres used for making twine include cotton
Cotton
Cotton is a soft, fluffy staple fiber that grows in a boll, or protective capsule, around the seeds of cotton plants of the genus Gossypium. The fiber is almost pure cellulose. The botanical purpose of cotton fiber is to aid in seed dispersal....
, sisal
Sisal
Sisal is an agave that yields a stiff fibre traditionally used in making twine, rope and also dartboards. The term may refer either to the plant or the fibre, depending on context...
, jute
Jute
Jute is a long, soft, shiny vegetable fibre that can be spun into coarse, strong threads. It is produced from plants in the genus Corchorus, which has been classified in the family Tiliaceae, or more recently in Malvaceae....
, hemp
Hemp
Hemp is mostly used as a name for low tetrahydrocannabinol strains of the plant Cannabis sativa, of fiber and/or oilseed varieties. In modern times, hemp has been used for industrial purposes including paper, textiles, biodegradable plastics, construction, health food and fuel with modest...
, henequen
Henequen
Henequen is an agave whose leaves yield a fiber also called henequen which is suitable for rope and twine, but not of as high a quality as sisal. Alternative spellings are Henequin and Heniquen. It is the major plantation fiber agave of eastern Mexico, being grown extensively in Yucatán,...
, and coir
Coir
Coir is a natural fibre extracted from the husk of coconut and used in products such as floor mats, doormats, brushes, mattresses etc. Technically coir is the fibrous material found between the hard, internal shell and the outer coat of a coconut. Other uses of brown coir are in upholstery...
. A variety of synthetic fibres may also be used.