Encyclopedia
The corpus callosum also known as the colossal commissure
Commissure
A commissure is the place where two things are joined. The term is used especially in the fields of anatomy and biology.In anatomy, commissure refers to a bundle of nerve fibers that cross the midline at their level of origin or entry .* The most common usage of the term refers to the brain's...
, is a wide, flat bundle of neural fibers beneath the cortex
Cerebral cortex
The cerebral cortex is a sheet of neural tissue that is outermost to the cerebrum of the mammalian brain. It plays a key role in memory, attention, perceptual awareness, thought, language, and consciousness. It is constituted of up to six horizontal layers, each of which has a different...
in the eutheria
Eutheria
Eutheria is a group of mammals consisting of placental mammals plus all extinct mammals that are more closely related to living placentals than to living marsupials . They are distinguished from noneutherians by various features of the feet, ankles, jaws and teeth...
n brain
Brain
The brain is the center of the nervous system in all vertebrate and most invertebrate animals—only a few primitive invertebrates such as sponges, jellyfish, sea squirts and starfishes do not have one. It is located in the head, usually close to primary sensory apparatus such as vision, hearing,...
at the longitudinal fissure. It connects the left and right cerebral hemisphere
Cerebral hemisphere
A cerebral hemisphere is one of the two regions of the eutherian brain that are delineated by the median plane, . The brain can thus be described as being divided into left and right cerebral hemispheres. Each of these hemispheres has an outer layer of grey matter called the cerebral cortex that is...
s and facilitates interhemispheric communication. It is the largest white matter
White matter
White matter is one of the two components of the central nervous system and consists mostly of myelinated axons. White matter tissue of the freshly cut brain appears pinkish white to the naked eye because myelin is composed largely of lipid tissue veined with capillaries. Its white color is due to...
structure in the brain, consisting of 200–250 million contralateral axon
Axon
An axon is a long, slender projection of a nerve cell, or neuron, that conducts electrical impulses away from the neuron's cell body or soma....
al projections.

The corpus callosum is found only in placental mammals (the eutheria
Eutheria
Eutheria is a group of mammals consisting of placental mammals plus all extinct mammals that are more closely related to living placentals than to living marsupials . They are distinguished from noneutherians by various features of the feet, ankles, jaws and teeth...
ns), while it is absent in monotreme
Monotreme
Monotremes are mammals that lay eggs instead of giving birth to live young like marsupials and placental mammals...
s and marsupial
Marsupial
Marsupials are an infraclass of mammals, characterized by giving birth to relatively undeveloped young. Close to 70% of the 334 extant species occur in Australia, New Guinea, and nearby islands, with the remaining 100 found in the Americas, primarily in South America, but with thirteen in Central...
s, as well as other vertebrates such as birds, reptiles, amphibians and fish (other groups do have other brain structures that allow for communication between the two hemispheres, such as the anterior commissure
Anterior commissure
The anterior commissure is a bundle of nerve fibers , connecting the two cerebral hemispheres across the midline, and placed in front of the columns of the fornix...
, which serves as the primary mode of interhemispheric communication in marsupials, and which carries all the commissural fibers arising from the neocortex
Neocortex
The neocortex , also called the neopallium and isocortex , is a part of the brain of mammals. It is the outer layer of the cerebral hemispheres, and made up of six layers, labelled I to VI...
(also known as the neopallium), whereas in placental mammals the anterior commissure carries only some of these fibers). In primate
Primate
A primate is a mammal of the order Primates , which contains prosimians and simians. Primates arose from ancestors that lived in the trees of tropical forests; many primate characteristics represent adaptations to life in this challenging three-dimensional environment...
s, the speed of nerve transmission depends on its degree of myelination, or lipid coating. This is reflected by the diameter of the nerve axon. In most primates, axonal diameter increases in proportion to brain size to compensate for the increased distance to travel for neural impulse transmission. This allows the brain to coordinate sensory and motor impulses. However, the scaling of overall brain size and increased myelination has not occurred between chimpanzee
Chimpanzee
Chimpanzee, sometimes colloquially chimp, is the common name for the two extant species of ape in the genus Pan. The Congo River forms the boundary between the native habitat of the two species:...
s and human
Human
Humans are the only living species in the Homo genus...
s. This has resulted in the human corpus callosum's requiring double the time for interhemispheric communication as a macaque
Macaque
The macaques constitute a genus of Old World monkeys of the subfamily Cercopithecinae. - Description :Aside from humans , the macaques are the most widespread primate genus, ranging from Japan to Afghanistan and, in the case of the barbary macaque, to North Africa...
's. 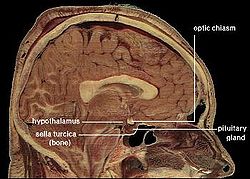 The fibrous bundle that the corpus callosum appears as, can and does increase to such an extent in humans that it encroaches upon and wedges apart the hippocampal structures.

ACC is usually non-fatal. Treatment usually involves management of symptoms, such as hydrocephaly and seizures, if they occur. Although many children with the disorder will lead normal lives and have average intelligence, careful neuropsychological testing reveals subtle differences in higher cortical function compared to individuals of the same age and education without ACC. Children with ACC accompanied by developmental delay and/or seizure disorders should be screened for metabolic disorders.

In addition to agenesis of the corpus callosum, similar conditions are hypogensis (partial formation), dysgensis (malformed), and hypoplasia (underdevelopment, including too thin).

The corpus callosum and its relation to sex has been a subject of debate in the scientific and lay communities for over a century. Initial research in the early 20th century claimed the corpus to be different in size between men and women. That research was in turn questioned, and ultimately gave way to more advanced imaging techniques that appeared to refute earlier correlations. The new advent of physiologic based imaging has altered the paradigm dramatically, with the relationship between gender and the corpus callosum becoming a subject of increasing numbers of studies in recent years.

The first study of the corpus with relation to gender was by R. B. Bean, a Philadelphia anatomist, who suggested in 1906 that "exceptional size of the corpus callosum may mean exceptional intellectual activity" and that there were measurable differences between men and women. Perhaps reflecting the political climate of the times, he went on to claim differences in the size of the callosum across different races. His research was ultimately refuted by Franklin Mall, the director of his own laboratory.

Of more mainstream impact was a 1982 Science
Science (magazine)
Science was a general science magazine published by the American Association for the Advancement of Science . It was intended to "bridge the distance between science and citizen", aimed at a technically literate audience who may not work professionally in the sciences...
article by Holloway
Ralph Holloway
Ralph Leslie Holloway, Jr. is a physical anthropologist at Columbia University and research associate with the American Museum of Natural History. Since obtaining his Ph.D from the University of California, Berkley in 1964, Holloway has served as a professor of anthropology at Columbia...
and Utamsing that suggested sex difference in human brain morphology
Morphology (biology)
In biology, morphology is a branch of bioscience dealing with the study of the form and structure of organisms and their specific structural features....
, which related to differences in cognitive ability. Time
Time (magazine)
Time is an American news magazine. A European edition is published from London. Time Europe covers the Middle East, Africa and, since 2003, Latin America. An Asian edition is based in Hong Kong...
published an article in 1992 that suggested that, because the corpus is "often wider in the brains of women than in those of men, it may allow for greater cross-talk between the hemispheres—possibly the basis for women’s intuition."

More recent publications in the psychology literature have raised doubt as to whether the anatomic size of the corpus is actually different. A meta-analysis of 49 studies since 1980 found that, contrary to de Lacoste-Utamsing and Holloway, no sex difference could be found in the size of the corpus callosum, whether or not account was taken of larger male brain size. A study in 2006 using thin slice MRI showed no difference in thickness of the corpus when accounting for the size of the subject.

The ability to evaluate the form and function of the human mind has undergone almost exponential growth and a paradigm shift in recent years. Magnetic resonance imaging, for example, is now being used to analyze physiology in addition to anatomy. Using diffusion tensor sequences
Diffusion MRI
Diffusion MRI is a magnetic resonance imaging method that produces in vivo images of biological tissues weighted with the local microstructural characteristics of water diffusion, which is capable of showing connections between brain regions...
on MRI machines, the rate that molecules diffuse in and out of a specific area of tissue, directionality or anisotropy, and rates of metabolism can be measured. These sequences have found consistent sex differences in human corpus callosal morphology and microstructure.

Morphometric analysis has also been used to study specific 3-dimensional mathematical relationships with MRIs, and have found consistent and statistically significant differences across genders. Specific algorithms have found significant gender differences in over 70% of cases in one review.

The relationship between the corpus callosum and gender remains an active subject of debate in the scientific and lay community.

The front portion of the corpus callosum has been reported to be significantly larger in musicians than non-musicians, and to be 0.75 square centimeter or 11% larger in left-handed
Left-handed
Left-handedness is the preference for the left hand over the right for everyday activities such as writing. In ancient times it was seen as a sign of the devil, and was abhorred in many cultures...
and ambidextrous people than right-handed people. This difference is evident in the anterior and posterior regions of the corpus callosum but not in the splenium. 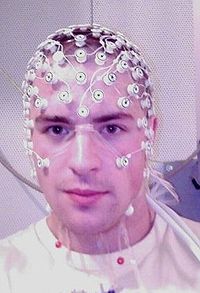 The symptoms of refractory epilepsy
Epilepsy
Epilepsy is a common chronic neurological disorder characterized by seizures. These seizures are transient signs and/or symptoms of abnormal, excessive or hypersynchronous neuronal activity in the brain.About 50 million people worldwide have epilepsy, and nearly two out of every three new cases...
can be reduced by cutting the corpus callosum in an operation known as a corpus callosotomy
Corpus callosotomy
Corpus callosotomy is a surgical procedure that disconnects the cerebral hemispheres, resulting in a condition called split-brain....
. This is usually reserved for cases in which complex or grand mal seizures are produced by an epileptogenic focus on one side of the brain, causing an interhemispheric electrical storm. The work up for this procedure involves an electroencephalogram, MRI, PET scan, and evaluation by a specialized neurologist, neurosurgeon, psychiatrist, and neuroradiologist before surgery can be considered.