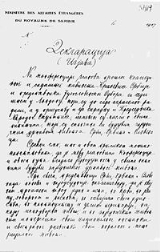 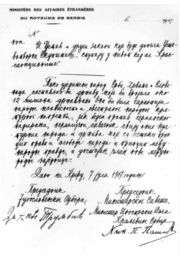 The Corfu Declaration is the agreement that made the creation of the Kingdom of Yugoslavia
Kingdom of Yugoslavia
The Kingdom of Yugoslavia was a state stretching from the Western Balkans to Central Europe which existed during the often-tumultuous interwar era of 1918–1941...
possible. In 1916, the Serbian Parliament in exile
Exile
Exile means to be away from one's home , while either being explicitly refused permission to return and/or being threatened with imprisonment or death upon return...
decided the creation of the Kingdom of Yugoslavia at a meeting inside the Municipal Theatre
Municipal Theatre of Corfu
The Municipal Theatre of Corfu was τhe main theatre and opera house in Corfu, Greece, from 1902 to 1943. The theatre was the successor of the Nobile Teatro di San Giacomo di Corfù, which became the Corfu city hall. It was destroyed during a Luftwaffe aerial bombardment in 1943...
of Corfu
Corfu (city)
Corfu is a city and a former municipality on the island of Corfu, Ionian Islands, Greece. Since the 2011 local government reform, it is part of the municipality Corfu, of which it is a municipal unit. It is the capital of the island and of the Corfu regional unit. The city also serves as a capital...
, Greece
Greece
Greece , officially the Hellenic Republic , and historically Hellas or the Republic of Greece in English, is a country in southeastern Europe....
. The declaration was signed near the end of World War I
World War I
World War I , which was predominantly called the World War or the Great War from its occurrence until 1939, and the First World War or World War I thereafter, was a major war centred in Europe that began on 28 July 1914 and lasted until 11 November 1918...
on the island of Corfu
Corfu
Corfu is a Greek island in the Ionian Sea. It is the second largest of the Ionian Islands, and, including its small satellite islands, forms the edge of the northwestern frontier of Greece. The island is part of the Corfu regional unit, and is administered as a single municipality. The...
on 20 July 1917, by the Yugoslav Committee
Yugoslav Committee
Yugoslav Committee was a political interest group formed by South Slavs from Austria-Hungary during World War I aimed at joining the existing south Slavic nations in an independent state.Founding members included:* Frano Supilo* Ante Trumbić...
of politicians in exile, that represented Slovenes, Croats
Croats
Croats are a South Slavic ethnic group mostly living in Croatia, Bosnia and Herzegovina and nearby countries. There are around 4 million Croats living inside Croatia and up to 4.5 million throughout the rest of the world. Responding to political, social and economic pressure, many Croats have...
and Serbs
Serbs
The Serbs are a South Slavic ethnic group of the Balkans and southern Central Europe. Serbs are located mainly in Serbia, Montenegro and Bosnia and Herzegovina, and form a sizable minority in Croatia, the Republic of Macedonia and Slovenia. Likewise, Serbs are an officially recognized minority in...
living in Austria-Hungary
Austria-Hungary
Austria-Hungary , more formally known as the Kingdoms and Lands Represented in the Imperial Council and the Lands of the Holy Hungarian Crown of Saint Stephen, was a constitutional monarchic union between the crowns of the Austrian Empire and the Kingdom of Hungary in...
and the representatives of the Kingdom of Serbia
History of Serbia
The history of Serbia, as a country, begins with the Slavic settlements in the Balkans, established in the 6th century in territories governed by the Byzantine Empire. Through centuries, the Serbian realm evolved into a Kingdom , then an Empire , before the Ottomans annexed it in 1540...
, with political sponsorship of Great Britain
Great Britain
Great Britain or Britain is an island situated to the northwest of Continental Europe. It is the ninth largest island in the world, and the largest European island, as well as the largest of the British Isles...
and France
France
The French Republic , The French Republic , The French Republic , (commonly known as France , is a unitary semi-presidential republic in Western Europe with several overseas territories and islands located on other continents and in the Indian, Pacific, and Atlantic oceans. Metropolitan France...
, under their avowed principles of national self-determination.

The Declaration as "the first step toward building the new State of Yugoslavia" envisaged a parliamentary monarchy under the Karađorđević dynasty, with indivisible territory and unitary power, with the three national denominations and the Latin and Cyrillic alphabets equal before the law, religious freedom and universal suffrage. It provided for a Constituent Assembly
Constituent assembly
A constituent assembly is a body composed for the purpose of drafting or adopting a constitution...
to establish a Constitution that would be the origin of all powers.

"This State will be a guarantee of their national independence and of their general national progress and civilization, and a powerful rampart against the pressure of the Germans
Germans
The Germans are a Germanic ethnic group native to Central Europe. The English term Germans has referred to the German-speaking population of the Holy Roman Empire since the Late Middle Ages....
", the Declaration concluded.

The two chiefly responsible for devising the wording of the Corfu Declaration were the Serbian Prime Minister Nikola Pašić
Nikola Pašic
Nikola P. Pašić was a Serbian and Yugoslav politician and diplomat, the most important Serbian political figure for almost 40 years, leader of the People's Radical Party who, among other posts, was twice a mayor of Belgrade...
and the Croatian exile Ante Trumbić
Ante Trumbic
Ante Trumbić was a Croatian politician in the early 20th century. He was one of the key politicians in the creation of a Yugoslav state....
, who worked to overcome official Serbian resistance. Pašić and the Serbian Court Party had remained intent upon the simple expansion of a Greater Serbia
Greater Serbia
The term Greater Serbia or Great Serbia applies to the Serbian nationalist and irredentist ideology directed towards the creation of a Serbian land which would incorporate all regions of traditional significance to the Serbian nation...
by means of unilateral territorial gains to be derived from a beaten Austro-Hungarian Empire. The outbreak of the February Revolution
February Revolution
The February Revolution of 1917 was the first of two revolutions in Russia in 1917. Centered around the then capital Petrograd in March . Its immediate result was the abdication of Tsar Nicholas II, the end of the Romanov dynasty, and the end of the Russian Empire...
in Russia
Russia
Russia or , officially known as both Russia and the Russian Federation , is a country in northern Eurasia. It is a federal semi-presidential republic, comprising 83 federal subjects...
had withdrawn Serbia's Major Power champion from the diplomatic table. Pašić compromised, signed the Declaration and began to work behind the scenes in an attempt to discredit the Yugoslav Committee
Yugoslav Committee
Yugoslav Committee was a political interest group formed by South Slavs from Austria-Hungary during World War I aimed at joining the existing south Slavic nations in an independent state.Founding members included:* Frano Supilo* Ante Trumbić...
, lest the Allied Powers regard the Committee as the rightful government-in-exile at the coming Armistice.

As a consequence, the Kingdom of Serbs, Croats and Slovenes was created on December 1, 1918. Trumbić was named Foreign Minister, and Pašić found himself temporarily out of power.