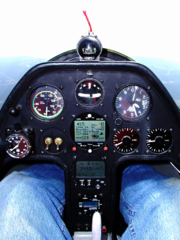 In aviation
Aviation
Aviation is the design, development, production, operation, and use of aircraft, especially heavier-than-air aircraft. Aviation is derived from avis, the Latin word for bird.-History:...
, coordinated flight of an aircraft
Aircraft
An aircraft is a vehicle that is able to fly by gaining support from the air, or, in general, the atmosphere of a planet. An aircraft counters the force of gravity by using either static lift or by using the dynamic lift of an airfoil, or in a few cases the downward thrust from jet engines.Although...
is flight without sideslip
Slip (aerodynamic)
A slip is an aerodynamic state where an aircraft is moving somewhat sideways as well as forward relative to the oncoming airflow. In other words, for a conventional aircraft, the nose will not be pointing directly into the relative wind .A slip is also a piloting maneuver where the pilot...
.

Particular care to maintain coordinated flight is required by the pilot when entering and leaving turns.

Airplanes and helicopter
Helicopter
A helicopter is a type of rotorcraft in which lift and thrust are supplied by one or more engine-driven rotors. This allows the helicopter to take off and land vertically, to hover, and to fly forwards, backwards, and laterally...
s are usually equipped with a turn and bank indicator
Turn and bank indicator
In aviation, the turn and bank indicator shows the rate of turn and the coordination of the turn. The rate of turn is indicated from a rate gyroscopically and the coordination of the turn is shown by either a pendulum or a heavy ball mounted in a curved sealed glass tube. No pitch information is...
to provide their pilots with a continuous display of the lateral balance of their aircraft so the pilots can ensure coordinated flight.

An airplane has three axes of rotation:

If the pilot were to use only the rudder to initiate a turn in the air, the airplane would tend to "skid" to the outside of the turn.

If the pilot were to use only the ailerons to initiate a turn in the air, the airplane would tend to "slip" towards the lower wing.

However, if the pilot makes appropriate use of the rudder, ailerons and elevator to enter and leave the turn such that sideslip and lateral acceleration are zero the airplane will be in coordinated flight.
The source of this article is wikipedia, the free encyclopedia.  The text of this article is licensed under the GFDL.