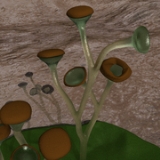 Encyclopedia
Cooksonia is an extinct grouping of primitive land plants. The earliest Cooksonia date from the middle of the Silurian
Silurian
The Silurian is a geologic period and system that extends from the end of the Ordovician Period, about 443.7 ± 1.5 Mya , to the beginning of the Devonian Period, about 416.0 ± 2.8 Mya . As with other geologic periods, the rock beds that define the period's start and end are well identified, but the...
(the Wenlock epoch); the group continues to be an important component of the flora until the Early Devonian, a total time span of . For historical reasons, while Cooksonia fossils are distributed globally, most type specimens come from Britain.

Only the sporophyte
Sporophyte
All land plants, and some algae, have life cycles in which a haploid gametophyte generation alternates with a diploid sporophyte, the generation of a plant or algae that has a double set of chromosomes. A multicellular sporophyte generation or phase is present in the life cycle of all land plants...
phase of Cooksonia is currently known (i.e. the phase which produces spore
Spore
In biology, a spore is a reproductive structure that is adapted for dispersal and surviving for extended periods of time in unfavorable conditions. Spores form part of the life cycles of many bacteria, plants, algae, fungi and some protozoa. According to scientist Dr...
s rather than gamete
Gamete
A gamete is a cell that fuses with another cell during fertilization in organisms that reproduce sexually...
s). Individuals were small, a few centimetres tall, and had a simple structure; they lacked leaves, flowers and roots — although it has been speculated that they grew from an unpreserved rhizome. They had a simple stalk, that branched dichotomously a few times. Each branch ended in a sporangium
Sporangium
A sporangium is an enclosure in which spores are formed. It can be composed of a single cell or can be multicellular. All plants, fungi, and many other lineages form sporangia at some point in their life cycle...
, a rounded, spore-bearing structure. The original description of the genus by Lang described the sporangia as terminal on the stems and wider than high. A 2010 review of the genus by Gonez and Gerrienne produced a tighter definition, which requires the sporangia to be more-or-less trumpet-shaped (as in the illustration), with a 'lid' or operculum which disintegrates to release the spores.

Specimens of one species of Cooksonia have a dark stripe in the centre of their stalks, which has been interpreted as the earliest remains of water carrying tissue. Other Cooksonia species lacked such conducting tissue.

Cooksonia specimens occur in a range of sizes, and vary in stem width from about 0.03 mm to 3 mm. Specimens of different sizes were probably different species, not fragments of larger organisms: fossils occur in consistent size groupings, and sporangia and spore details are different in organisms of different sizes. The organisms probably exhibited determinate growth (i.e. stems did not grow further after producing sporangia).

Some Cooksonia species can be shown to bear stomata
Stoma
In botany, a stoma is a pore, found in the leaf and stem epidermis that is used forgas exchange. The pore is bordered by a pair of specialized parenchyma cells known as guard cells that are responsible for regulating the size of the opening...
, which had a role in gas exchange; this was probably to assist in transpiration
Transpiration
Transpiration is a process similar to evaporation. It is a part of the water cycle, and it is the loss of water vapor from parts of plants , especially in leaves but also in stems, flowers and roots. Leaf surfaces are dotted with openings which are collectively called stomata, and in most plants...
-driven transport of dissolved materials in the xylem
Xylem
Xylem is one of the two types of transport tissue in vascular plants. . The word xylem is derived from the Classical Greek word ξυλον , meaning "wood"; the best-known xylem tissue is wood, though it is found throughout the plant...
, rather than primarily in photosynthesis
Photosynthesis
Photosynthesis is a chemical process that converts carbon dioxide into organic compounds, especially sugars, using the energy from sunlight. Photosynthesis occurs in plants, algae, and many species of bacteria, but not in archaea. Photosynthetic organisms are called photoautotrophs, since they can...
, as suggested by their concentration at the tips of the axes. These clusterings of stomata are typically associated with a bulging in the axis at the neck of the sporangium, which may have contained photosynthetic tissue, reminiscent of some mosses.

As the genus is circumscribed
Circumscription (taxonomy)
In taxonomy, circumscription is the definition of the limits of a taxonomic group of organisms. One goal of taxonomy is to achieve a stable circumscription for every taxonomic group. Achieving stability can be simple or difficult....
by Gonez and Gerrienne, there are six possible species. C. pertonii, C. paranensis and C. banksii are all relatively similar with flat-topped, trumpet-shaped sporangia; stems are somewhat narrower in C. paranensis than in C. pertonii. Only one specimen of C. bohemica is known. It has stouter, more branched stems; the original shape of the sporangia is unclear because of poor preservation. C. hemisphaerica, described from the same locality as C. pertonii, differs in having sporangia whose tops, at least as preserved, are hemispherical rather than flat. C. cambrensis also has spherical sporangia, but without the gradual widening at the base characteristic of the other species. Preservation of the sporangia is again poor.

While reconstructions traditionally depict Cooksonia as a green and red, photosynthesising, self-sufficient stem, it is likely that at least some fossils instead preserve a sporophyte generation which was dependent on a gametophyte
Gametophyte
A gametophyte is the haploid, multicellular phase of plants and algae that undergo alternation of generations, with each of its cells containing only a single set of chromosomes....
for its nutrition – a relationship that occurs in modern mosses and liverworts
Marchantiophyta
The Marchantiophyta are a division of bryophyte plants commonly referred to as hepatics or liverworts. Like other bryophytes, they have a gametophyte-dominant life cycle, in which cells of the plant carry only a single set of genetic information....
.

However, no fossil evidence of a gametophyte of Cooksonia has been discovered to date. Study of smaller Cooksonia fossils showed that once the tissue required to support the axes, protect them from desiccation, and transport water had been accounted for, no room remained for photosynthetic tissue. Further, the axis thickness is what would be expected if its sole role was to support a sporangium. It appears that, originally at least, the role of the axes in smaller species was solely to ensure continued spore dispersal, even if the axis desiccated.

The widths of Cooksonia fossils span an order of magnitude; while the smaller ones could not possibly be self-sufficient, the larger axes could, which provides a possible illustration of the evolution of an independent sporophyte generation.

The first Cooksonia species were described by William Henry Lang
William Henry Lang
William Henry Lang FRS was a British botanist. The son of Thomas Lang, a medical practitioner, Lang was educated at Dennistoun public school in Glasgow before being accepted into the University of Glasgow, where he graduated with a Bsc in botany and zoology in 1894...
in 1937 and named in honor of Isabel Cookson
Isabel Clifton Cookson
Isabel Clifton Cookson was an Australian botanist who specialised in palaeobotany and palynology.Cookson was born at Hawthorn, Victoria, and attended the Methodist Ladies' College at Kew where she gained honours in anatomy, physiology and botany in the senior public examination...
, with whom he had collaborated, and who collected specimens of Cooksonia pertoni in Perton Quarry, Wales
Wales
Wales is a country that is part of the United Kingdom and the island of Great Britain, bordered by England to its east and the Atlantic Ocean and Irish Sea to its west. It has a population of three million, and a total area of 20,779 km²...
, in 1934. There were originally two species, Cooksonia pertonii and C. hemisphaerica. The genus was defined as having narrow leafless stems (axes), which branched dichotomously, with terminal sporangia that were "short and wide". There was a a central vascular cylinder consisting of annular tracheids (water-conducting cells with thickened walls). Six other species were later added to the genus: C. crassiparietilis, C. caledonica, C. cambrensis, C. bohemica, C. paranensis and C. banksii. A review in 2010 concluded that the delineation of the genus was inaccurate and that some species needed to be removed; in particular those whose sporangia were not more-or-less trumpet-shaped. As emended by Gonez and Gerrienne, Cooksonia has the following species:
Three further species are considered doubtful because of the poor preservation of the specimens, but are left in the genus:
Two species are excluded from the genus: C. caledonica (which was later moved to a new genus Aberlemnia
Aberlemnia
Aberlemnia is a genus of extinct vascular plants of the Early Devonian , which consisted of leafless stems with terminal spore-forming organs . Fossils found in Scotland were initially described as Cooksonia caledonica...
) and the less well-preserved C. crassiparietilis. These have sporangia which are composed of two 'valves', splitting to release their spores along a line opposite to where they are attached to the stem (i.e. distally).

For some years, it was suspected that Cooksonia and its species were poorly characterized. Thus four different kinds of spore, probably representing four different species, were found in sporangia originally identified as C. pertoni.

A 2010 study of the genus produced the consensus cladogram
Cladogram
A cladogram is a diagram used in cladistics which shows ancestral relations between organisms, to represent the evolutionary tree of life. Although traditionally such cladograms were generated largely on the basis of morphological characters, DNA and RNA sequencing data and computational...
shown below (some branches have been collapsed to reduce the size of the diagram). This was based on data from an earlier study (by Kenrick and Crane), supplemented by further information on Cooksonia species resulting from the authors' own research.
This confirms that the genus Cooksonia sensu Lang (1937) is polyphyletic
Polyphyly
A polyphyletic group is one whose members' last common ancestor is not a member of the group.For example, the group consisting of warm-blooded animals is polyphyletic, because it contains both mammals and birds, but the most recent common ancestor of mammals and birds was cold-blooded...
. A core group of five species are placed together, unresolved between the euphyllophytes and the lycophytes. The poorly preserved C. hemisphaerica is placed as the most basal tracheophyte. Two other species, C. crassiparietilis and C. caledonica, are placed in the stem group of the lycophytes. These two species have been removed from Cooksonia sensu Gonez & Gerrienne (C. caledonica has since been placed in a new genus Aberlemnia
Aberlemnia
Aberlemnia is a genus of extinct vascular plants of the Early Devonian , which consisted of leafless stems with terminal spore-forming organs . Fossils found in Scotland were initially described as Cooksonia caledonica...
). Both have sporangia which, although borne terminally rather than laterally, have a mechanism for releasing spores similar to those of the zosterophylls.

A second cladistic
Cladistics
Cladistics is a method of classifying species of organisms into groups called clades, which consist of an ancestor organism and all its descendants . For example, birds, dinosaurs, crocodiles, and all descendants of their most recent common ancestor form a clade...
analysis was carried out using only the three best preserved and thus best known species, C. pertoni, C. paranensis, and C. caledonica. The position of C. caledonica was confirmed, but C. pertoni and C. paranensis now formed a single clade more clearly related to the lycophytes than the euphyllophytes.