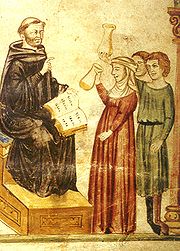 It was in Italy where Constantine complied his vast opus, mostly composed of translations from Arabic sources. He translated into Latin books of the great masters of Arabic medicine: Razes Ali Ibn Massaouia Baghdad, Ibn Imran, Ibn Suleiman, and Ibn Al-Jazzar. These translations are housed today in libraries in Italy, Germany, France, Belgium, and England. They were used as textbooks in the Middle Ages until the seventeenth century.


The historians of Constantine

The twelfth century monk Peter the Deacon
Peter the Deacon
Peter the Deacon was the librarian of the abbey of Montecassino and continuator of the Chronicon Monasterii Casinensis, usually called the Montecassino Chronicle in English. The chronicle was originally written by Leo of Ostia...
is the first historian to have written the biography of Constantine. He noted that Constantine was a 'Saracen', the medieval Franco-Italian term meaning a Muslim from North Africa. Later historians such as De Renzi and Daremberg, curator of the National Library in Paris, and Leclerc, author of "History of Arab Medicine", relied on Diaconus' account. The German Steinscheider wrote a book dedicated to Constantine, which was printed in Berlin in 1865. The Orientalist Karl Sudhoff
Karl Sudhoff
Karl Sudhoff was a German historian of medicine, important in establishing that field as a legitimate discipline for research and teaching within faculties of medicine....
made his Berber-Islamic thesis when he discovered new and important documents touching on Constantine's life and religion in the village of Trinity Della Cave, northern Italy; these documents were published in the journal Arkioun in 1922.

Karl Sudhoff
Karl Sudhoff
Karl Sudhoff was a German historian of medicine, important in establishing that field as a legitimate discipline for research and teaching within faculties of medicine....
, said, according to documents cited above, he emigrated first to Italy as a merchant from Sicily, and was called in those documents Constantine Siculus. He moved to Salerno as a merchant (mercator). Suffering from an illness and took refuge with the king's brother Gusulf. A doctor named "Abbas of Curiat" was the interpreter between the two men, as Constantine ignored the Italian. Constantine noted that Abbas did not ask for the bottle of urine and the doctor who had come to examine it was inexperienced. He concludes that medicine in Italy was limited to a few simple practical knowledge, which led Constantine to ask whether there was in Italy for good books in medicine, he said no. This man, who had an extensive general knowledge, felt he had a civilizing mission that he wanted to accomplish.

He returned to Carthage. He practiced medicine for three years and collected many books of medicine and went to southern Italy carrying with him this treasure. He walked towards Salerno and then he passed through the coast of Lucania, north of the Gulf of Polycastro, a storm arose at sea damaging some manuscripts. The first three parts of the books of Ali Ibn Abbas Al Majoussi were lost. Our man arrived at Salerno with what remained of the books, he converted to Christianity, then moved to Cassino, where he worked as an interpreter. The Sudhof story ends with this event.

These are the parts borrowed and translated word for word from the study of Karl Sudhoff
Karl Sudhoff
Karl Sudhoff was a German historian of medicine, important in establishing that field as a legitimate discipline for research and teaching within faculties of medicine....
. Sudhoff is a scientist who has a thorough knowledge of history, renowned for its reliability in research. The interpreter between Constantine and the Italian doctor on his first trip, was also a Tunisian doctor. Was he not called Abbas of Curiat? Curiat is an island lying off the town of Mahdia, Tunisia. May be Abbas was with there with him from Sicily? Constantine was a trader and cultivated, there is nothing surprising, because education in the great mosque of the Zaytuna in Tunis and the scientists houses was open to all. He understood the traditional and the rational knowledge. The trade between Tunisia and Italy were flourishing, and that did not cease during difficult times. Tunisia had offices in various locations of Christian Sicily and southern Italy itself. These include Bari, Taranto, Agripolis and Gaglione.

Tunisia exported olive oil, wax, leather, wool and derivatives, and imported wheat in famine years. Market forces did not prohibit trade with countries of Christians and Constantine was converted to Christianity there is nothing surprising in that the thing was common, particularly if the person was forced, which was the case for prisoners. These include the case of Moroccan Hassan El Ouazzani traveler who converted to Christianity and called himself Leo Africanus, a situation similar to that of Constantine the African.

He arrived at Cassino, bringing with him the manuscripts of medicine that he took from Tunis. They include works of the Kairouanese El Baghdadi.

The books of Constantine are either by him or translated from Arabic. In many cases he fails to name his Arabic sources. It is so for the “Zad Al Mussāfir” of Ibn Al-Jazzar
Ibn Al-Jazzar
Ahmed Ben Jaafar Ben Brahim Ibn Al Jazzar Al-Qayrawani , was an influential 10th-century Muslim physician who became famous for his writings on Islamic medicine. He was born in Qayrawan in modern-day Tunisia...
, that he translated and to which he attached his name, with what some observers have labeled as impertinence. He writes in the introduction of Zad Al Mussāfir the following:
"If people are planning to dig into this book that comes from me, I let them sleep in their stupidity. I thought it is my duty to sign it because people envy other people for their work and to seize any book who falls into their hands, I titled Zad Al Mussāfir viaticum as his small volume will not clutter the baggage of the passenger nor hinders his movements. "

The Isagoge of Johannitius, which Constantine may have translated (the attribution is contested), has been edited by Gregor Maurach in Sudhoffs Archiv 62 (1978). This edition was never meant to be definitive, and it has received some criticism and corrections, most notably by Ursula Weisser.


The legend of Constantine

In his introduction of the complete works of Ambroise Pare, here what Doctor Malgaine writes:
"Constantine was born in Carthage and taken with an ardent desire to learn all sciences he went to Babylonia, learned grammar, logic, physics (medicine), geometry, arithmetic, mathematics, astronomy, necromancy, and music. After exhausting all sciences of the Chaldeans, Arabs and Persians he went to India, asked the scientists of this country, returned from Egypt where he completed his long study and after four decades of travel and work, he returned in his hometown. But such rare and many knowledge scared his countrymen, they took him for a sorcerer and banished him. Constantine informed in time, fled and went to Salerno where he remained for some time hidden under the garb of a beggar. The brother of the king of Babylon who passes through this city, recognized him and presented him to the famous Robert Guiscard, who made him his first secretary. But more than eager to rest than with honors he left the court and retired to Monte Cassino where he spent the rest of his life translating from Arabic into Latin various medical books."
The source of this article is wikipedia, the free encyclopedia.  The text of this article is licensed under the GFDL.