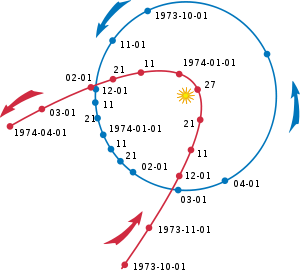 Comet Kohoutek, formally designated C/1973 E1, 1973 XII, and 1973f, was first sighted on 7 March 1973 by Czech
Czech Republic
The Czech Republic is a landlocked country in Central Europe. The country is bordered by Poland to the northeast, Slovakia to the east, Austria to the south, and Germany to the west and northwest....
astronomer Luboš Kohoutek
Luboš Kohoutek
Luboš Kohoutek is a Czech astronomer.Kohoutek has been interested with astronomy since high school. He studied physics and astronomy at universities in Brno and Prague...
. It attained perihelion on 28 December that same year.

Comet Kohoutek is a long-period comet; its previous apparition was about 150,000 years ago, and its next apparition will be in about 75,000 years. At its apparition in 1973 it had a hyperbolic trajectory
Hyperbolic trajectory
In astrodynamics or celestial mechanics a hyperbolic trajectory is a Kepler orbit with the eccentricity greater than 1. Under standard assumptions a body traveling along this trajectory will coast to infinity, arriving there with hyperbolic excess velocity relative to the central body. Similarly to...
(e
Orbital eccentricity
The orbital eccentricity of an astronomical body is the amount by which its orbit deviates from a perfect circle, where 0 is perfectly circular, and 1.0 is a parabola, and no longer a closed orbit...
> 1) due to gravitational perturbations from giant planets. Due to its path, scientists theorized that Kohoutek was an Oort-cloud
Oort cloud
The Oort cloud , or the Öpik–Oort cloud , is a hypothesized spherical cloud of comets which may lie roughly 50,000 AU, or nearly a light-year, from the Sun. This places the cloud at nearly a quarter of the distance to Proxima Centauri, the nearest star to the Sun...
object. As such, it was believed likely that this was the comet's first visit to the inner Solar System, which would result in a spectacular display of outgassing. Infrared and visual telescopic study have led many scientists to conclude, in retrospect, that Kohoutek is actually a Kuiper-belt object
Kuiper belt
The Kuiper belt , sometimes called the Edgeworth–Kuiper belt, is a region of the Solar System beyond the planets extending from the orbit of Neptune to approximately 50 AU from the Sun. It is similar to the asteroid belt, although it is far larger—20 times as wide and 20 to 200 times as massive...
, which would account for its apparent rocky makeup and lack of outgassing.

Before its close approach, Kohoutek was hyped by the media as the "comet of the century". However, Kohoutek's display was considered a let-down. Although it failed to brighten to levels expected, it was still a naked-eye object. Its greatest visual magnitude was -3, when it was at perihelion, 0.14 AU
Astronomical unit
An astronomical unit is a unit of length equal to about or approximately the mean Earth–Sun distance....
from the Sun
Sun
The Sun is the star at the center of the Solar System. It is almost perfectly spherical and consists of hot plasma interwoven with magnetic fields...
. Its orbital inclination
Inclination
Inclination in general is the angle between a reference plane and another plane or axis of direction.-Orbits:The inclination is one of the six orbital parameters describing the shape and orientation of a celestial orbit...
is 14.3°. Its best viewing was in the night sky after perihelion, when it had dimmed to fourth magnitude
Apparent magnitude
The apparent magnitude of a celestial body is a measure of its brightness as seen by an observer on Earth, adjusted to the value it would have in the absence of the atmosphere...
. The comet also sported a tail up to 25° long, along with an anti-tail.

C/1973 E1 should not be confused with the periodic comet 75D/Kohoutek, which can also be called "Comet Kohoutek" (as could the comets C/1969 O1 and C/1973 D1, also discovered by Luboš Kohoutek as sole discoverer).

This comet was observed by the crew of Skylab 4
Skylab 4
Skylab 4 was the fourth Skylab mission and placed the third and final crew on board the space station. The mission started November 16, 1973 with the launch of three astronauts on a Saturn IB rocket, and lasted 84 days, 1 hour and 16 minutes...
and Soyuz 13
Soyuz 13
Soyuz 13 was a 1973 Soviet manned space flight, the second test flight of the redesigned Soyuz 7K-T spacecraft that first flew as Soyuz 12. The spacecraft was specially modified to carry the Orion 2 Space Observatory...
, thus becoming the first comet to be observed by a manned spacecraft.

Because Comet Kohoutek fell far short of expectations, its name became synonymous with spectacular duds. However, it was fairly bright as comets go and put on a respectable show in the evenings shortly after perihelion.

In 1973, David Berg
David Berg
David Brandt Berg , frequently known by the pseudonym Moses David, was the founder and leader of the New Religious Movement formerly called Children of God, now called "The Family International".-Early years :Berg was born to Hjalmer Emmanuel Berg and Rev...
, founder of the Children of God, predicted that Comet Kohoutek foretold a colossal doomsday event
Doomsday event
A doomsday event is a specific, plausibly verifiable or hypothetical occurrence which has an exceptionally destructive effect on the human race...
in the United States
United States
The United States of America is a federal constitutional republic comprising fifty states and a federal district...
in January 1974. Children of God members distributed Berg's messages, which warned of impending doom, across the country. The majority of U.S.-based members then fled in anticipation to existing group communes
Commune (intentional community)
A commune is an intentional community of people living together, sharing common interests, property, possessions, resources, and, in some communes, work and income. In addition to the communal economy, consensus decision-making, non-hierarchical structures and ecological living have become...
(or formed new ones) around the world.