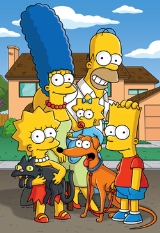 The family was conceived by Groening shortly before a pitch for a series of animated shorts with the producer James L. Brooks
James L. Brooks
James Lawrence Brooks is an American director, producer and screenwriter. Growing up in North Bergen, New Jersey, Brooks endured a fractured family life and passed the time by reading and writing. After dropping out of New York University, he got a job as an usher at CBS, going on to write for the...
.

Politics of The Simpsons

Has the quality of The Simpsons declined?

Scope and themes of The Simpsons
More
x