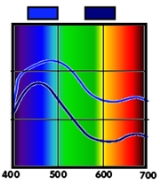 Encyclopedia
Colorimetry is "the science
Science
Science is a systematic enterprise that builds and organizes knowledge in the form of testable explanations and predictions about the universe...
and technology
Technology
Technology is the making, usage, and knowledge of tools, machines, techniques, crafts, systems or methods of organization in order to solve a problem or perform a specific function. It can also refer to the collection of such tools, machinery, and procedures. The word technology comes ;...
used to quantify and describe physically the human color perception."
It is similar to spectrophotometry
Spectrophotometry
In chemistry, spectrophotometry is the quantitative measurement of the reflection or transmission properties of a material as a function of wavelength...
, but is distinguished by its interest in reducing spectra to the physical correlates of color perception, most often the CIE 1931 XYZ color space tristimulus values and related quantities.

Colorimetric equipment is similar to that used in spectrophotometry. Some related equipment is also mentioned for completeness. 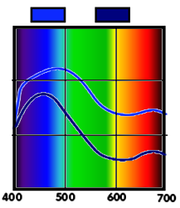 In digital imaging
Digital imaging
Digital imaging or digital image acquisition is the creation of digital images, typically from a physical scene. The term is often assumed to imply or include the processing, compression, storage, printing, and display of such images...
, colorimeters are tristimulus devices used for color calibration
Color calibration
The aim of color calibration is to measure and/or adjust the color response of a device to a known state. In ICC terms this is the basis for a additional color characterization of the device and later profiling. In non ICC workflows calibration refers sometimes to establishing a known relationship...
. Accurate color profiles
ICC profile
In color management, an ICC profile is a set of data that characterizes a color input or output device, or a color space, according to standards promulgated by the International Color Consortium...
ensure consistency throughout the imaging workflow, from acquisition to output.

Reflected color can be measured using a spectrophotometer (also called spectroreflectometer or reflectometer), which takes measurements in the visible region (and a little beyond) of a given color sample. If the custom of taking readings at 10 nanometer increments is followed, the visible light range of 400-700 nm will yield 31 readings. These readings are typically used to draw the sample's spectral reflectance
Reflectivity
In optics and photometry, reflectivity is the fraction of incident radiation reflected by a surface. In general it must be treated as a directional property that is a function of the reflected direction, the incident direction, and the incident wavelength...
curve (how much it reflects, as a function of wavelength)—the most accurate data that can be provided regarding its characteristics.

The readings by themselves are typically not as useful as their tristimulus values, which can be converted into chromaticity
Chromaticity
Chromaticity is an objective specification of the quality of a color regardless of its luminance, that is, as determined by its hue and colorfulness ....
co-ordinates and manipulated through color space transformations. For this purpose, a spectrocolorimeter may be used. A spectrocolorimeter is simply a spectrophotometer that can estimate tristimulus values by numerical integration
Numerical integration
In numerical analysis, numerical integration constitutes a broad family of algorithms for calculating the numerical value of a definite integral, and by extension, the term is also sometimes used to describe the numerical solution of differential equations. This article focuses on calculation of...
(of the color matching functions' inner product with the illuminant's spectral power distribution). One benefit of spectrocolorimeters over tristimulus colorimeters is that they do not have optical filters, which are subject to manufacturing variance, and have a fixed spectral transmittance curve—until they age. On the other hand, tristimulus colorimeters are purpose-built, cheaper, and easier to use.

The CIE recommends using measurement intervals under 5 nm, even for smooth spectra. Sparser measurements fail to accurately characterize spiky emission spectra, such as that of the red phosphor of a CRT display, depicted aside.

Photographers and cinematographer
Cinematographer
A cinematographer is one photographing with a motion picture camera . The title is generally equivalent to director of photography , used to designate a chief over the camera and lighting crews working on a film, responsible for achieving artistic and technical decisions related to the image...
s use information provided by these meters to decide what color balancing
Color balance
In photography and image processing, color balance is the global adjustment of the intensities of the colors . An important goal of this adjustment is to render specific colors – particularly neutral colors – correctly; hence, the general method is sometimes called gray balance, neutral balance,...
should be done to make different light sources appear to have the same color temperature. If the user enters the reference color temperature, the meter can calculate the mired difference between the measurement and the reference, enabling the user to choose a corrective color gel
Color gel
A color gel or color filter , also known as lighting gel or simply gel, is a transparent colored material that is used in theatre, event production, photography, videography and cinematography to color light and for color correction...
or photographic filter
Photographic filter
In photography and videography, a filter is a camera accessory consisting of an optical filter that can be inserted in the optical path. The filter can be a square or oblong shape mounted in a holder accessory, or, more commonly, a glass or plastic disk with a metal or plastic ring frame, which...
with the closest mired factor.

Internally the meter is typically a silicon photodiode tristimulus colorimeter. The correlated color temperature can be calculated from the tristimulus values by first calculating the chromaticity
Chromaticity
Chromaticity is an objective specification of the quality of a color regardless of its luminance, that is, as determined by its hue and colorfulness ....
co-ordinates in the CIE 1960 color space
CIE 1960 color space
The CIE 1960 color space is another name for the chromaticity space devised by David MacAdam....
, then finding the closest point on the Planckian locus
Planckian locus
In physics and color science, the Planckian locus or black body locus is the path or locus that the color of an incandescent black body would take in a particular chromaticity space as the blackbody temperature changes...
.