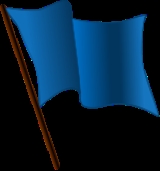 Encyclopedia
The Colombian Conservative Party , is a conservative
Conservatism
Conservatism is a political and social philosophy that promotes the maintenance of traditional institutions and supports, at the most, minimal and gradual change in society. Some conservatives seek to preserve things as they are, emphasizing stability and continuity, while others oppose modernism...
political party in Colombia
Colombia
Colombia, officially the Republic of Colombia , is a unitary constitutional republic comprising thirty-two departments. The country is located in northwestern South America, bordered to the east by Venezuela and Brazil; to the south by Ecuador and Peru; to the north by the Caribbean Sea; to the...
. The party was unofficially founded by a group of Revolutionary Commoners during the Revolutionary War for Independence from the Spanish Monarchy and later formally established during the Greater Colombia formation.

In 1848, the Liberal Party was founded. However, a dissident group inside the party, called the "ministerial liberals" left the party with the objective of creating a new one.
In 1849, Mariano Ospina Rodríguez
Mariano Ospina Rodríguez
Mariano Ospina Rodríguez was a Colombian politician, journalist and lawyer, founder of the Colombian Conservative Party and later President of Colombia between 1857 and 1861 during the Granadine Confederation.- Biographic data :...
and José Eusebio Caro, after months of deliberations, wrote the ideological platform and fundamental programs of the Colombian Conservative Party. They both created the newspaper called “La Civilización” to promote their political ideas. The Colombian Conservative party was formally founded on October 4, 1849, when a declaration of political principles was published in the "La Civilización" newspaper. The party's original program called for the defense of constitutional order and legality against dictatorship
Dictatorship
A dictatorship is defined as an autocratic form of government in which the government is ruled by an individual, the dictator. It has three possible meanings:...
and monarchy
Monarchy
A monarchy is a form of government in which the office of head of state is usually held until death or abdication and is often hereditary and includes a royal house. In some cases, the monarch is elected...
, the protection of property
Property
Property is any physical or intangible entity that is owned by a person or jointly by a group of people or a legal entity like a corporation...
rights against communism
Communism
Communism is a social, political and economic ideology that aims at the establishment of a classless, moneyless, revolutionary and stateless socialist society structured upon common ownership of the means of production...
, that of Roman Catholic morality
Morality
Morality is the differentiation among intentions, decisions, and actions between those that are good and bad . A moral code is a system of morality and a moral is any one practice or teaching within a moral code...
against atheism
Atheism
Atheism is, in a broad sense, the rejection of belief in the existence of deities. In a narrower sense, atheism is specifically the position that there are no deities...
, the equality of citizens before the law, and the victory of civilization
Civilization
Civilization is a sometimes controversial term that has been used in several related ways. Primarily, the term has been used to refer to the material and instrumental side of human cultures that are complex in terms of technology, science, and division of labor. Such civilizations are generally...
against barbarism
Barbarian
Barbarian and savage are terms used to refer to a person who is perceived to be uncivilized. The word is often used either in a general reference to a member of a nation or ethnos, typically a tribal society as seen by an urban civilization either viewed as inferior, or admired as a noble savage...
. 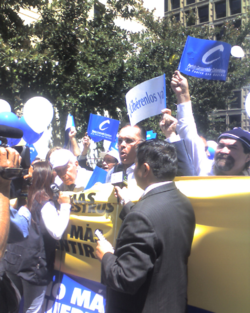 The party's current programme includes several objectives: to continue the search for peace in Colombia (following the examples of former presidents Guillermo León Valencia
Guillermo León Valencia
Guillermo León Valencia Muñóz was a Colombian lawyer and statesman, who served as President of Colombia from August 7, 1962 to August 7, 1966.-Personal life:...
, Belisario Betancur
Belisario Betancur
Belisario Betancur Cuartas is a Colombian statesman, who as a member of the Colombian Conservative Party was President of Colombia from 1982 to 1986.- Biographic data :...
and Andrés Pastrana, as members of the party), to preserve national unity and the continuing belief in God held by the majority of Colombians, the need for a reform of the 1991 constitution in order to correct some of its flaws to promote the modernization of the state, to fight unemployment, poverty, and lack of security and to extend and defend property rights for all Colombians.

The Colombian Conservative Party has become a close political ally of President Álvaro Uribe
Álvaro Uribe
Alvaro Uribe Vélez was the 58th President of Colombia, from 2002 to 2010. In August 2010 he was appointed Vice-chairman of the UN panel investigating the Gaza flotilla raid....
, who was formerly a member of the opposing Liberal party. The party did not present its own candidate for the 2006 presidential elections, and instead supported President Uribe's reelection.

In 2010, the party held for the first time, primary elections to choose a candidate for presidency. Noemí Sanín
Noemí Sanín
Marta Noemí del Espíritu Santo Sanín Posada is a Colombian lawyer and politician, twice Ambassador of Colombia to the United Kingdom, as well as Ambassador to Spain and Venezuela...
was nominated presidential candidate of the Conservative Party, the first woman to do so.

In 1998, Andres Pastrana Arango
Andrés Pastrana Arango
Andrés Pastrana Arango was the President of Colombia from 1998 to 2002, following in the footsteps of his father, Misael Pastrana, who was president from 1970 to 1974.-Early years:...
, a conservative, was elected president of Colombia, setting a conservative tendency that would catch on with the Colombian politics, after achieving the approval for the Plan Colombia
Plan Colombia
The term Plan Colombia is most often used to refer to U.S. legislation aimed at curbing drug smuggling and combating a left-wing insurgency by supporting different activities in Colombia....
.