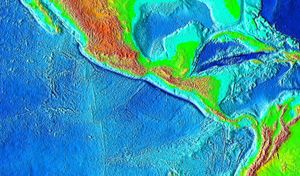 The Middle America Trench is a major subduction zone, an oceanic trench
Oceanic trench
The oceanic trenches are hemispheric-scale long but narrow topographic depressions of the sea floor. They are also the deepest parts of the ocean floor....
in the eastern Pacific Ocean
Pacific Ocean
The Pacific Ocean is the largest of the Earth's oceanic divisions. It extends from the Arctic in the north to the Southern Ocean in the south, bounded by Asia and Australia in the west, and the Americas in the east.At 165.2 million square kilometres in area, this largest division of the World...
off the southwestern coast of Middle America
Middle America (Americas)
Middle America is a region in the mid-latitudes of the Americas. In southern North America, it usually comprises Mexico, the nations of Central America, and the West Indies. The scope of the term may vary...
, stretching from central Mexico
Mexico
The United Mexican States , commonly known as Mexico , is a federal constitutional republic in North America. It is bordered on the north by the United States; on the south and west by the Pacific Ocean; on the southeast by Guatemala, Belize, and the Caribbean Sea; and on the east by the Gulf of...
to Costa Rica
Costa Rica
Costa Rica , officially the Republic of Costa Rica is a multilingual, multiethnic and multicultural country in Central America, bordered by Nicaragua to the north, Panama to the southeast, the Pacific Ocean to the west and the Caribbean Sea to the east....
. The trench is 1,700 miles (2,750 km) long and is 21,880 feet (6,669 m) at its deepest point.
The trench is the boundary between the Pacific
Pacific Plate
The Pacific Plate is an oceanic tectonic plate that lies beneath the Pacific Ocean. At 103 million square kilometres, it is the largest tectonic plate....
, Rivera
Rivera Plate
The Rivera Plate is a small tectonic plate located off the west coast of Mexico, just south of the Baja California Peninsula. It is bounded on the northwest by the East Pacific Rise, on the southwest by the Rivera Transform Fault, on the southeast by a deformation zone, and on the northeast by...
, Cocos
Cocos Plate
The Cocos Plate is an oceanic tectonic plate beneath the Pacific Ocean off the west coast of Central America, named for Cocos Island, which rides upon it.-Geology:...
, and Nazca
Nazca Plate
]The Nazca Plate, named after the Nazca region of southern Peru, is an oceanic tectonic plate in the eastern Pacific Ocean basin off the west coast of South America. The ongoing subduction along the Peru-Chile Trench of the Nazca Plate under the South American Plate is largely responsible for the...
plates, and the North American
North American Plate
The North American Plate is a tectonic plate covering most of North America, Greenland, Cuba, Bahamas, and parts of Siberia, Japan and Iceland. It extends eastward to the Mid-Atlantic Ridge and westward to the Chersky Range in eastern Siberia. The plate includes both continental and oceanic crust...
and Caribbean
Caribbean Plate
The Caribbean Plate is a mostly oceanic tectonic plate underlying Central America and the Caribbean Sea off the north coast of South America....
plates. It is currently the 18th deepest trench in the world. Many large thrust earthquake occurred in the area of the Middle America Trench.

The Middle America Trench can be divided into a northern and a southern section. However, the division is not the same in its seaward side and its landward side. In the seaward side, the northern section, called the Acapulco Trench, runs from Jalisco
Jalisco
Jalisco officially Estado Libre y Soberano de Jalisco is one of the 31 states which, with the Federal District, comprise the 32 Federal Entities of Mexico. It is located in Western Mexico and divided in 125 municipalities and its capital city is Guadalajara.It is one of the more important states...
to the Tehuantepec Ridge, and the southern section, called the Guatemala Trench, runs from the Tehuantepec Ridge to the Cocos Ridge. In the landward side, the division is situated Polochic-Motagua Fault (the Polochic-Motagua Fault marks the boundary between the North American Plate and the Caribbean Plate). The dividing point in the landward side is about 400 km east of that in the seaward side.
The source of this article is wikipedia, the free encyclopedia.  The text of this article is licensed under the GFDL.