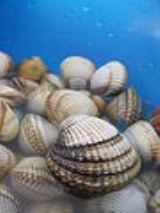 Encyclopedia
Cockle is the common name
Common name
A common name of a taxon or organism is a name in general use within a community; it is often contrasted with the scientific name for the same organism...
for a group of (mostly) small, edible, saltwater clams, marine
Marine (ocean)
Marine is an umbrella term. As an adjective it is usually applicable to things relating to the sea or ocean, such as marine biology, marine ecology and marine geology...
bivalve molluscs in the family Cardiidae.

Various species
Species
In biology, a species is one of the basic units of biological classification and a taxonomic rank. A species is often defined as a group of organisms capable of interbreeding and producing fertile offspring. While in many cases this definition is adequate, more precise or differing measures are...
of cockles live in sandy sheltered beaches throughout the world.

The distinctive rounded shells of cockles are symmetrical, and are heart-shaped when viewed from the end. In most but not all genera
Genus
In biology, a genus is a low-level taxonomic rank used in the biological classification of living and fossil organisms, which is an example of definition by genus and differentia...
there are numerous radial ribs. For an exception, see the genus Laevicardium
Laevicardium
Laevicardium is a genus of molluscs in the family Cardiidae.-Species:* Laevicardium laevigatum — egg cockle* Laevicardium mortoni — Morton's egg cockle...
, the egg cockles, which have very smooth shells.

The mantle
Mantle (mollusc)
The mantle is a significant part of the anatomy of molluscs: it is the dorsal body wall which covers the visceral mass and usually protrudes in the form of flaps well beyond the visceral mass itself.In many, but by no means all, species of molluscs, the epidermis of the mantle secretes...
has three apertures (inhalant, exhalant, and pedal) for siphoning water and for the foot to protrude. Cockles typically burrow using the foot, and feed by filtering plankton
Plankton
Plankton are any drifting organisms that inhabit the pelagic zone of oceans, seas, or bodies of fresh water. That is, plankton are defined by their ecological niche rather than phylogenetic or taxonomic classification...
from the surrounding water.

Cockles are capable of 'jumping' by bending and straightening the foot.

Like many bivalves, cockles display Gonochorism
Gonochorism
In biology, gonochorism or unisexualism describes sexually reproducing species in which individuals have just one of at least two distinct sexes. The term is most often used with animals . The sex of an individual may change during its lifetime, this can for example be found in parrotfish...
and some species reach maturity quickly.
Confusingly, the common name "cockle" is also given (by seafood sellers) to a number of other small edible bivalves which have a somewhat similar shape, however these bivalves are in other families such as the Veneridae (Venus clams) and the Arcidae (ark clams). Cockles in the family Cardiidae are sometimes known as "true cockles" in order to distinguish them from these other species.

Genera within the family Cardiidae include:

There are more than 200 living species of cockles, with many more fossil forms.

The common cockle, Cerastoderma edule
Common cockle
Cerastoderma edule, commonly known as the common cockle, is a species of edible saltwater clam, a marine bivalve mollusc in the family Cardiidae, the cockles.This species is found in coastal areas of the eastern Atlantic Ocean...
, is widely distributed around the coastlines of Northern Europe
Northern Europe
Northern Europe is the northern part or region of Europe. Northern Europe typically refers to the seven countries in the northern part of the European subcontinent which includes Denmark, Estonia, Latvia, Lithuania, Norway, Finland and Sweden...
with a range extending west to Ireland
Ireland
Ireland is an island to the northwest of continental Europe. It is the third-largest island in Europe and the twentieth-largest island on Earth...
, the Barents Sea
Barents Sea
The Barents Sea is a marginal sea of the Arctic Ocean, located north of Norway and Russia. Known in the Middle Ages as the Murman Sea, the sea takes its current name from the Dutch navigator Willem Barents...
in the north, Norway
Norway
Norway , officially the Kingdom of Norway, is a Nordic unitary constitutional monarchy whose territory comprises the western portion of the Scandinavian Peninsula, Jan Mayen, and the Arctic archipelago of Svalbard and Bouvet Island. Norway has a total area of and a population of about 4.9 million...
in the east, and as far south as Senegal
Senegal
Senegal , officially the Republic of Senegal , is a country in western Africa. It owes its name to the Sénégal River that borders it to the east and north...
.

The dog cockle
Dog cockle
The dog cockle or European bittersweet, Glycymeris glycymeris, is a species of marine clam, a coastal bivalve mollusc of European waters.Despite its common name, it is not closely related to the common cockle....
, Glycymeris glycymeris, has a similar range and habitat to the common cockle, but is unrelated. It is inedible due to its toughness when cooked, although a process is being developed to solve this.

The blood cockle
Blood cockle
Anadara granosa is a species of ark clam known as the blood cockle due to the red haemoglobin liquid inside. It is found throughout the Indo-Pacific region from eastern Africa to Australia to Polynesia to Japan. It lives mainly in the intertidal zone at one to two metres water depth, burrowed down...
, Anadara granosa (not related to the true cockles, instead in the family Arcidae) is extensively cultured from southern Korea
Korea
Korea ) is an East Asian geographic region that is currently divided into two separate sovereign states — North Korea and South Korea. Located on the Korean Peninsula, Korea is bordered by the People's Republic of China to the northwest, Russia to the northeast, and is separated from Japan to the...
to Malaysia.


In cuisine and culture

Cockles are a popular type of edible shellfish
Shellfish
Shellfish is a culinary and fisheries term for exoskeleton-bearing aquatic invertebrates used as food, including various species of molluscs, crustaceans, and echinoderms. Although most kinds of shellfish are harvested from saltwater environments, some kinds are found only in freshwater...
in both Eastern and Western cooking
Cooking
Cooking is the process of preparing food by use of heat. Cooking techniques and ingredients vary widely across the world, reflecting unique environmental, economic, and cultural traditions. Cooks themselves also vary widely in skill and training...
. They are collected by raking them from the sands at low tide. However, the labour of collecting cockles is hard work and, as seen from the Morecambe Bay disaster
2004 Morecambe Bay cockling disaster
The Morecambe Bay cockling disaster occurred on the evening of 5 February 2004 at Morecambe Bay in North West England, when at least 21 cockle pickers were drowned by an incoming tide off the Lancashire/Cumbrian coast....
, in which 23 illegal immigrants died, can be dangerous if local tidal conditions are not carefully watched. In the UK, Magna Carta
Magna Carta
Magna Carta is an English charter, originally issued in the year 1215 and reissued later in the 13th century in modified versions, which included the most direct challenges to the monarch's authority to date. The charter first passed into law in 1225...
grants every citizen the right to collect up to eight pounds of cockles from the foreshore. However, pickers wishing to collect more than eight pounds of cockles are deemed to be engaging in commercial fishing and are required to obtain a permit from the Inshore Fisheries and Conservation Authority.

Cockles are sold freshly cooked as a snack in the United Kingdom
United Kingdom
The United Kingdom of Great Britain and Northern IrelandIn the United Kingdom and Dependencies, other languages have been officially recognised as legitimate autochthonous languages under the European Charter for Regional or Minority Languages...
, particularly around the parts of the British coastline which are inhabited by cockles. Boiled then seasoned with malt vinegar and white pepper
Black pepper
Black pepper is a flowering vine in the family Piperaceae, cultivated for its fruit, which is usually dried and used as a spice and seasoning. The fruit, known as a peppercorn when dried, is approximately in diameter, dark red when fully mature, and, like all drupes, contains a single seed...
, they can be bought from seafood stalls, alongside mussels, whelk
Whelk
Whelk, also spelled welk or even "wilks", is a common name used to mean one or more kinds of sea snail. The species, genera and families referred to using this common name vary a great deal from one geographic area to another...
s, jellied eels, crab
Crab
True crabs are decapod crustaceans of the infraorder Brachyura, which typically have a very short projecting "tail" , or where the reduced abdomen is entirely hidden under the thorax...
s and shrimps. Cockles are also available pickled in jars, and more recently, have been sold in sealed packets (with vinegar) containing a plastic two-pronged fork. A meal of cockles fried with bacon
Bacon
Bacon is a cured meat prepared from a pig. It is first cured using large quantities of salt, either in a brine or in a dry packing; the result is fresh bacon . Fresh bacon may then be further dried for weeks or months in cold air, boiled, or smoked. Fresh and dried bacon must be cooked before eating...
, served with laver bread, is known as a traditional Welsh breakfast.

Boiled cockles (sometimes grilled) are sold at many hawker centers in South East Asia, and are used in laksa
Laksa
Laksa is a popular spicy noodle soup from the Peranakan culture, which is a merger of Chinese and Malay elements found in Malaysia and Singapore, and to a lesser extent Indonesia.- Origin :The origin of the name "laksa" is unclear...
, char kway teow
Char kway teow
Char kway teow, literally "stir-fried ricecake strips", is a popular noodle dish in Malaysia, Indonesia, Brunei and Singapore. The dish was typically prepared at hawker stalls especially in Penang, Malaysia.It is made from flat rice noodles of approximately 1 cm or...
and steamboat. They are called kerang in Malay
Malay language
Malay is a major language of the Austronesian family. It is the official language of Malaysia , Indonesia , Brunei and Singapore...
and see hum in Hokkien
Hokkien
Hokkien is a Hokkien word corresponding to Standard Chinese "Fujian". It may refer to:* Hokkien dialect, a dialect of Min Nan Chinese spoken in Southern Fujian , Taiwan, South-east Asia, and elsewhere....
.

Consumption of raw cockles has been linked to hepatitis
Hepatitis
Hepatitis is a medical condition defined by the inflammation of the liver and characterized by the presence of inflammatory cells in the tissue of the organ. The name is from the Greek hepar , the root being hepat- , meaning liver, and suffix -itis, meaning "inflammation"...
.

Cockles are an effective bait for a wide variety of sea fishes.

The folk song Molly Malone
Molly Malone
"Molly Malone" is a popular song, set in Dublin, Ireland, which has become the unofficial anthem of Dublin City....
is also known as Cockles and Mussels because the title character's sale of the two foods is referenced in the song's refrain.

The common English
English language
English is a West Germanic language that arose in the Anglo-Saxon kingdoms of England and spread into what was to become south-east Scotland under the influence of the Anglian medieval kingdom of Northumbria...
phrase 'it warms the cockles of my heart', is used to signify that a feeling of deep-seated contentment is triggered.

Differing derivations of this phrase have been proposed, either directly from the perceived heart-shape of a cockleshell, or indirectly (the scientific name for the type genus of the family is Cardium, from the Greek for heart), or from the Latin diminutive of the word heart, corculum. Another proposed derivation is from the Latin for the ventricles of the heart, cochleae cordis, where the second word is an inflected form of cor, heart, while cochlea is the Latin for snail.