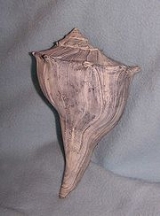 Overview
Whelk, also spelled welk or even "wilks", is a common name
Common name
A common name of a taxon or organism is a name in general use within a community; it is often contrasted with the scientific name for the same organism...
used to mean one or more kinds of sea snail
Sea snail
Sea snail is a common name for those snails that normally live in saltwater, marine gastropod molluscs....
. The species, genera and families referred to using this common name vary a great deal from one geographic area to another. Many kinds of whelks have historically been used, or are still used, by humans for food.

Although many whelks are quite large and are in the family Buccinidae
Buccinidae
Buccinidae is a very large and diverse taxonomic family of large sea snails, often known as whelks or true whelks.True whelks are mostly marine gastropod mollusks in the clade Neogastropoda...
(the true whelks) the word is also applied to some other marine
Marine (ocean)
Marine is an umbrella term. As an adjective it is usually applicable to things relating to the sea or ocean, such as marine biology, marine ecology and marine geology...
gastropod mollusc species
Species
In biology, a species is one of the basic units of biological classification and a taxonomic rank. A species is often defined as a group of organisms capable of interbreeding and producing fertile offspring. While in many cases this definition is adequate, more precise or differing measures are...
within several, not very closely related, families of sea snails.

The word originally comes from the Proto-Germanic root "weluka", which may come from the Proto-Indo-European root "wel-" meaning to turn or revolve.
In the United States
United States
The United States of America is a federal constitutional republic comprising fifty states and a federal district...
, whelk refers to several large edible species in the genera Busycon
Busycon
Busycon is a genus of very large edible sea snails, marine gastropod mollusks in the family Buccinidae. These snails are commonly known in the United States as whelks or Busycon whelks....
and Busycotypus
Busycotypus
Busycotypus is a genus of very large sea snails, marine gastropod mollusks in the family Buccinidae. In the USA, these are commonly known as whelks.-Subgenera and species:Subgenera and species within the genus Busycotypus are as follows:...
, which are now classified in the family Buccinidae
Buccinidae
Buccinidae is a very large and diverse taxonomic family of large sea snails, often known as whelks or true whelks.True whelks are mostly marine gastropod mollusks in the clade Neogastropoda...
.