Coat of arms of the Dominican Republic
Topic Home
Discussion
0 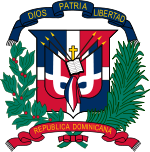 The coat of arms
Coat of arms
A coat of arms is a unique heraldic design on a shield or escutcheon or on a surcoat or tabard used to cover and protect armour and to identify the wearer. Thus the term is often stated as "coat-armour", because it was anciently displayed on the front of a coat of cloth...
of the Dominican Republic
Dominican Republic
The Dominican Republic is a nation on the island of La Hispaniola, part of the Greater Antilles archipelago in the Caribbean region. The western third of the island is occupied by the nation of Haiti, making Hispaniola one of two Caribbean islands that are shared by two countries...
features a shield in similarly quartered colors as the flag, supported by a bay laurel
Bay Laurel
The bay laurel , also known as sweet bay, bay tree, true laurel, Grecian laurel, laurel tree, or simply laurel, is an aromatic evergreen tree or large shrub with green, glossy leaves, native to the Mediterranean region. It is the source of the bay leaf used in cooking...
branch (left) and a palm frond (right); above the shield, a blue ribbon displays the national motto
Motto
A motto is a phrase meant to formally summarize the general motivation or intention of a social group or organization. A motto may be in any language, but Latin is the most used. The local language is usual in the mottoes of governments...
: Dios, Patria, Libertad (God, Fatherland, Liberty). Below the shield, the words República Dominicana appear on a red ribbon (in more recent versions, this red ribbon is depicted as having its tips and tassels flexed upward). In the center of the shield, flanked by six spears (three on each side), the front four holding Dominican banners, is a Bible
Bible
The Bible refers to any one of the collections of the primary religious texts of Judaism and Christianity. There is no common version of the Bible, as the individual books , their contents and their order vary among denominations...
with a small golden cross above it, which is opened (according to popular belief) to the Gospel of John
Gospel of John
The Gospel According to John , commonly referred to as the Gospel of John or simply John, and often referred to in New Testament scholarship as the Fourth Gospel, is an account of the public ministry of Jesus...
, 8:32, which reads Y la verdad os hará libre (And the truth shall make you free).