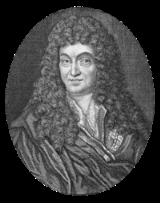 Encyclopedia
Claude Perrault is best known as the architect
Architect
An architect is a person trained in the planning, design and oversight of the construction of buildings. To practice architecture means to offer or render services in connection with the design and construction of a building, or group of buildings and the space within the site surrounding the...
of the eastern range of the Louvre Palace in Paris
Paris
Paris is the capital and largest city in France, situated on the river Seine, in northern France, at the heart of the Île-de-France region...
(see Perrault’s Colonnade
Perrault’s Colonnade
Claude Perrault’s Colonnade is the easternmost façade of the Palais du Louvre in Paris. It has been celebrated as the foremost masterpiece of French Architectural Classicism since its construction, mostly between 1667 and 1670...
), but he also achieved success as a physician and anatomist, and as an author
Author
An author is broadly defined as "the person who originates or gives existence to anything" and that authorship determines responsibility for what is created. Narrowly defined, an author is the originator of any written work.-Legal significance:...
, who wrote treatises on physics
Physics
Physics is a natural science that involves the study of matter and its motion through spacetime, along with related concepts such as energy and force. More broadly, it is the general analysis of nature, conducted in order to understand how the universe behaves.Physics is one of the oldest academic...
and natural history
Natural history
Natural history is the scientific research of plants or animals, leaning more towards observational rather than experimental methods of study, and encompasses more research published in magazines than in academic journals. Grouped among the natural sciences, natural history is the systematic study...
.

Perrault was born and died in Paris. Aside from his influential architecture, he is best regarded for his translation of the ten books of Vitruvius
Vitruvius
Marcus Vitruvius Pollio was a Roman writer, architect and engineer, active in the 1st century BC. He is best known as the author of the multi-volume work De Architectura ....
, the only surviving Roman work on architecture
Roman architecture
Ancient Roman architecture adopted certain aspects of Ancient Greek architecture, creating a new architectural style. The Romans were indebted to their Etruscan neighbors and forefathers who supplied them with a wealth of knowledge essential for future architectural solutions, such as hydraulics...
, into French
French language
French is a Romance language spoken as a first language in France, the Romandy region in Switzerland, Wallonia and Brussels in Belgium, Monaco, the regions of Quebec and Acadia in Canada, and by various communities elsewhere. Second-language speakers of French are distributed throughout many parts...
, done at the instigation of Colbert
Jean-Baptiste Colbert
Jean-Baptiste Colbert was a French politician who served as the Minister of Finances of France from 1665 to 1683 under the rule of King Louis XIV. His relentless hard work and thrift made him an esteemed minister. He achieved a reputation for his work of improving the state of French manufacturing...
, and published, with Perrault's annotations, in 1673. His treatise on the five classical order
Classical order
A classical order is one of the ancient styles of classical architecture, each distinguished by its proportions and characteristic profiles and details, and most readily recognizable by the type of column employed. Three ancient orders of architecture—the Doric, Ionic, and Corinthian—originated in...
s of architecture followed in 1683. As physician and physicist with a degree of doctor from the University of Paris
University of Paris
The University of Paris was a university located in Paris, France and one of the earliest to be established in Europe. It was founded in the mid 12th century, and officially recognized as a university probably between 1160 and 1250...
, Perrault became one of the first members of the French Academy of Sciences
French Academy of Sciences
The French Academy of Sciences is a learned society, founded in 1666 by Louis XIV at the suggestion of Jean-Baptiste Colbert, to encourage and protect the spirit of French scientific research...
when it was founded in 1666.

In the competition for the new range of building for the Louvre he was successful over all rivals, even Gian Lorenzo Bernini
Gian Lorenzo Bernini
Gian Lorenzo Bernini was an Italian artist who worked principally in Rome. He was the leading sculptor of his age and also a prominent architect...
, who had traveled from Italy
Italy
Italy , officially the Italian Republic languages]] under the European Charter for Regional or Minority Languages. In each of these, Italy's official name is as follows:;;;;;;;;), is a unitary parliamentary republic in South-Central Europe. To the north it borders France, Switzerland, Austria and...
expressly for the purpose. This work claimed his attention from 1665 to 1680, and established his reputation: Perrault’s Colonnade
Perrault’s Colonnade
Claude Perrault’s Colonnade is the easternmost façade of the Palais du Louvre in Paris. It has been celebrated as the foremost masterpiece of French Architectural Classicism since its construction, mostly between 1667 and 1670...
overlooking the Quai du Louvre became widely celebrated. The simple character of the ground floor basement sets off the paired Corinthian
Corinthian order
The Corinthian order is one of the three principal classical orders of ancient Greek and Roman architecture. The other two are the Doric and Ionic. When classical architecture was revived during the Renaissance, two more orders were added to the canon, the Tuscan order and the Composite order...
columns, modeled strictly according to Vitruvius, against a shadowed void, with pavilions at the ends. Little that could be called Baroque
Baroque
The Baroque is a period and the style that used exaggerated motion and clear, easily interpreted detail to produce drama, tension, exuberance, and grandeur in sculpture, painting, literature, dance, and music...
can be identified in its cool classicism that looks back to the 16th century. The façade, divided in five parts, is a typical solution of the French classicism.

Perrault also built an Observatory, the church of St-Benoît-le-Bétourné, designed a new church of Ste-Geneviève, and erected an altar in the Church of the Little Fathers, all in Paris. Perrault's design for a triumphal arch
Triumphal arch
A triumphal arch is a monumental structure in the shape of an archway with one or more arched passageways, often designed to span a road. In its simplest form a triumphal arch consists of two massive piers connected by an arch, crowned with a flat entablature or attic on which a statue might be...
on Rue St-Antoine was preferred to competing designs of Charles Le Brun
Charles Le Brun
Charles Le Brun , a French painter and art theorist, became the all-powerful, peerless master of 17th-century French art.-Biography:-Early life and training:...
and Louis Le Vau
Louis Le Vau
Louis Le Vau was a French Classical architect who worked for Louis XIV of France. He was born and died in Paris.He was responsible, with André Le Nôtre and Charles Le Brun, for the redesign of the château of Vaux-le-Vicomte. His later works included the Palace of Versailles and his collaboration...
, but was only partly executed in stone. When the arch was taken down in the 19th century, it was found that the ingenious master had devised a means of so interlocking the stones, without mortar
Mortar (masonry)
Mortar is a workable paste used to bind construction blocks together and fill the gaps between them. The blocks may be stone, brick, cinder blocks, etc. Mortar becomes hard when it sets, resulting in a rigid aggregate structure. Modern mortars are typically made from a mixture of sand, a binder...
, that it had become an inseparable mass.

In addition, he made a valuable contribution in the acoustics. His treatise on sound was a part of the book Oeuvres diverses de Physique et de Mecanique. In his later book, he treats such subjects as sound media, sources of sound and sound receivers. Regarding the musical acoustics, he noted the importance of vibration on consonance and dissonance. His study De la Musique des Anciens (Oevres diverses de Physique et de Mecanique) discussed how the combination of different notes make up harmony. It also contains critical examinations of old manuscripts on European music.

His brother, Charles Perrault
Charles Perrault
Charles Perrault was a French author who laid the foundations for a new literary genre, the fairy tale, with his works derived from pre-existing folk tales. The best known include Le Petit Chaperon rouge , Cendrillon , Le Chat Botté and La Barbe bleue...
, is remembered as the classic reteller of the old story of Cinderella
Cinderella
"Cinderella; or, The Little Glass Slipper" is a folk tale embodying a myth-element of unjust oppression/triumphant reward. Thousands of variants are known throughout the world. The title character is a young woman living in unfortunate circumstances that are suddenly changed to remarkable fortune...
among other fables.