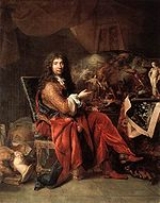 Encyclopedia
Charles Le Brun a French painter
Painting
Painting is the practice of applying paint, pigment, color or other medium to a surface . The application of the medium is commonly applied to the base with a brush but other objects can be used. In art, the term painting describes both the act and the result of the action. However, painting is...
and art theorist
Aesthetics
Aesthetics is a branch of philosophy dealing with the nature of beauty, art, and taste, and with the creation and appreciation of beauty. It is more scientifically defined as the study of sensory or sensori-emotional values, sometimes called judgments of sentiment and taste...
, became the all-powerful, peerless master of 17th-century French art.

Born in Paris, he attracted the notice of Chancellor Séguier
Pierre Séguier
-Early years:Born in Paris, France of a prominent legal family originating in Quercy. His grandfather, Pierre Séguier , was président à mortier in the parlement of Paris from 1554 to 1576, and the chancellor's father, Jean Séguier, a seigneur d'Autry, was civil lieutenant of Paris at the time of...
, who placed him at the age of eleven in the studio of Simon Vouet
Simon Vouet
Simon Vouet was a French painter and draftsman, who today is perhaps best remembered for helping to introduce the Italian Baroque style of painting to France.-Life:...
. He was also a pupil of François Perrier
François Perrier (painter)
François Perrier , a French painter and etcher, is remembered for his two collections of prints after antique sculptures, the Segmenta nobilium signorum et statuarum quae temporis dentem invidium evasere, , and Icones et segmenta...quae Romae adhuc extant ; they provided visual repertories of...
. At fifteen he received commissions from Cardinal Richelieu, in the execution of which he displayed an ability which obtained the generous commendations of Nicolas Poussin
Nicolas Poussin
Nicolas Poussin was a French painter in the classical style. His work predominantly features clarity, logic, and order, and favors line over color. His work serves as an alternative to the dominant Baroque style of the 17th century...
, in whose company Le Brun started for Rome
Rome
Rome is the capital of Italy and the country's largest and most populated city and comune, with over 2.7 million residents in . The city is located in the central-western portion of the Italian Peninsula, on the Tiber River within the Lazio region of Italy.Rome's history spans two and a half...
in 1642.

In Rome he remained four years in the receipt of a pension due to the liberality of the chancellor. There he worked under Poussin, adapting the latter's theories of art.

On his return to Paris in 1646, Le Brun found numerous patrons, of whom Superintendent Fouquet was the most important, for whom he painted a large portrait of Anne of Austria
Anne of Austria
Anne of Austria was Queen consort of France and Navarre, regent for her son, Louis XIV of France, and a Spanish Infanta by birth...
. Employed at Vaux-le-Vicomte
Vaux-le-Vicomte
The Château de Vaux-le-Vicomte is a baroque French château located in Maincy, near Melun, 55 km southeast of Paris in the Seine-et-Marne département of France...
, Le Brun ingratiated himself with Mazarin, then secretly pitting Colbert
Jean-Baptiste Colbert
Jean-Baptiste Colbert was a French politician who served as the Minister of Finances of France from 1665 to 1683 under the rule of King Louis XIV. His relentless hard work and thrift made him an esteemed minister. He achieved a reputation for his work of improving the state of French manufacturing...
against Fouquet. Colbert also promptly recognized Le Brun's powers of organization, and attached him to his interests. Together they took control of the Academy of Painting and Sculpture (Académie royale de peinture et de sculpture, 1648), and the Academy of France at Rome (1666), and gave a new development to the industrial arts.

Another project Le Brun worked on was Hôtel Lambert
Hôtel Lambert
Hôtel Lambert is a hôtel particulier, a grand mansion townhouse, on the Quai Anjou on the eastern tip of the Île Saint-Louis, Paris IVème; the name, Hôtel Lambert, was a sobriquet that designated a 19th-century political faction of Polish exiles, who gathered there.-Architectural history:The house...
. The ceiling in the gallery of Hercules
Hercules
Hercules is the Roman name for Greek demigod Heracles, son of Zeus , and the mortal Alcmene...
was painted by him. Le Brun started work on the project in 1650, shortly after his return from Italy. The decoration continued intermittently over twelve years or so, as it was interrupted by the renovation of Vaux le Vicomte.

In 1660 they established the Gobelins
Gobelins manufactory
The Manufacture des Gobelins is a tapestry factory located in Paris, France, at 42 avenue des Gobelins, near the Les Gobelins métro station in the XIIIe arrondissement...
, which at first was a great school for the manufacture, not of tapestries only, but of every class of furniture required in the royal palaces. Commanding the industrial arts through the Gobelins—of which he was director—and the whole artistic world through the Academy—in which he successively held every post—Le Brun imprinted his own character on all that was produced in France during his lifetime. He was the originator of Louis XIV Style and gave a direction to the national tendencies which endured centuries after his death.

The nature of his emphatic and pompous talent was in harmony with the taste of the king, who, full of admiration of the paintings by Le Brun for his triumphal entry into Paris (1660) and his decorations at the Château Vaux le Vicomte (1661), commissioned him to execute a series of subjects from the history of Alexander. The first of these, "Alexander and the Family of Darius," so delighted Louis XIV
Louis XIV of France
Louis XIV , known as Louis the Great or the Sun King , was a Bourbon monarch who ruled as King of France and Navarre. His reign, from 1643 to his death in 1715, began at the age of four and lasted seventy-two years, three months, and eighteen days...
that he at once ennobled Le Brun (December, 1662), who was also created Premier Peintre du Roi
Premier peintre du Roi
The Premier peintre du Roi was a post within the administration of the Bâtiments du Roi of the département de la Maison du Roi in France under the Ancien Régime, just below the post of directeur général des Bâtiments, Arts et Manufactures de France...
(First Painter to His Majesty) with a pension of 12,000 livres, the same amount as he had yearly received in the service of the magnificent Fouquet. The King had declared him "the greatest French artist of all time".

From this date all that was done in the royal palaces was directed by Le Brun. In 1663, he became director of the Académie royale de peinture et de sculpture, where he laid the basis of academicism and became the all-powerful, peerless master of 17th-century French art. It was during this period that he dedicated a series of works to the history of Alexander The Great (The Battles of Alexander The Great), and he did not miss the opportunity to make a stronger connection between the magnificence of Alexander and that of the great King. While he was working on The Battles, Le Brun's style became much more personal, revealing the essence of Le Brun as he moved away from the ancient masters that influenced him.

The works of the gallery of Apollo in the Louvre
Louvre
The Musée du Louvre – in English, the Louvre Museum or simply the Louvre – is one of the world's largest museums, the most visited art museum in the world and a historic monument. A central landmark of Paris, it is located on the Right Bank of the Seine in the 1st arrondissement...
were interrupted in 1677 when he accompanied the king to Flanders
Flanders
Flanders is the community of the Flemings but also one of the institutions in Belgium, and a geographical region located in parts of present-day Belgium, France and the Netherlands. "Flanders" can also refer to the northern part of Belgium that contains Brussels, Bruges, Ghent and Antwerp...
(on his return from Lille
Lille
Lille is a city in northern France . It is the principal city of the Lille Métropole, the fourth-largest metropolitan area in the country behind those of Paris, Lyon and Marseille. Lille is situated on the Deûle River, near France's border with Belgium...
he painted several compositions in the Château de Saint-Germain-en-Laye
Château de Saint-Germain-en-Laye
The Château de Saint-Germain-en-Laye is a royal palace in the commune of Saint-Germain-en-Laye, in the département of Yvelines, about 19 km west of Paris, France. Today, it houses the Musée d'Archéologie Nationale ....
), and finally—for they remained unfinished at his death—by the vast labours of Versailles
Versailles
Versailles , a city renowned for its château, the Palace of Versailles, was the de facto capital of the kingdom of France for over a century, from 1682 to 1789. It is now a wealthy suburb of Paris and remains an important administrative and judicial centre...
, where he reserved for himself the Halls of War and Peace (Salons de la Guerreand de la Paix, 1686), the Ambassadors' Staircase, and the Great Hall of Mirrors (Galerie des Glaces, 1679–1684. Le Brun's decoration is not only a work of art, it is the definitive monument of a reign.

At the death of Colbert, François-Michel le Tellier, Marquis de Louvois, Colbert's enemy, who succeeded as superintendent in the department of public works, showed no favour to Le Brun who was Colbert's favorite, and in spite of the king's continued support Le Brun felt a bitter change in his position. This contributed to the illness which on 22 February 1690 ended in his death in his private mansion, in Paris. 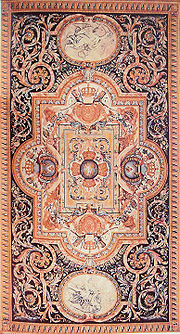 Le Brun primarily worked for King Louis XIV, for whom he executed large altarpiece
Altarpiece
An altarpiece is a picture or relief representing a religious subject and suspended in a frame behind the altar of a church. The altarpiece is often made up of two or more separate panels created using a technique known as panel painting. It is then called a diptych, triptych or polyptych for two,...
s and battle pieces. His most important paintings are at Versailles. Besides his gigantic labours at Versailles and the Louvre, the number of his works for religious corporations and private patrons is enormous. Le Brun was also a fine portraitist and an excellent draughtsman, but he was not fond of portrait or landscape painting, which he felt to be a mere exercise in developing technical prowess. What mattered was scholarly composition, whose ultimate goal was to nourish the spirit. The fundamental basis on which the director of the Academy based his art was unquestionably to make his paintings speak, through a series of symbols, costumes and gestures that allowed him to select for his composition the narrative elements that gave his works a particular depth. For Le Brun, a painting represented a story one could read. Nearly all his compositions have been reproduced by celebrated engravers.

In his posthumously published treatise, Méthode pour apprendre à dessiner les passions (1698) he promoted the expression of the emotions in painting. It had much influence on art theory for the next two centuries.

Many of his drawings are in the Louvre
Louvre
The Musée du Louvre – in English, the Louvre Museum or simply the Louvre – is one of the world's largest museums, the most visited art museum in the world and a historic monument. A central landmark of Paris, it is located on the Right Bank of the Seine in the 1st arrondissement...
and the Monaco Royal Collection
Prince's Palace of Monaco
The Prince's Palace of Monaco is the official residence of the Prince of Monaco. Built in 1191 as a Genoese fortress, during its long and often dramatic history it has been bombarded and besieged by many foreign powers. Since the end of the 13th century, it has been the stronghold and home of the...
. He was also the teacher of painter Ludovico Dorigny
Ludovico Dorigny
Ludovico Dorigny was a French painter and engraver. Trained in his native country, he spent most of his life and career in Verona, Italy.-Life and career:...
.