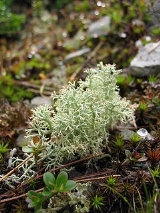 Encyclopedia
Cladonia is a genus
Genus
In biology, a genus is a low-level taxonomic rank used in the biological classification of living and fossil organisms, which is an example of definition by genus and differentia...
of moss
Moss
Mosses are small, soft plants that are typically 1–10 cm tall, though some species are much larger. They commonly grow close together in clumps or mats in damp or shady locations. They do not have flowers or seeds, and their simple leaves cover the thin wiry stems...
-like lichen
Lichen
Lichens are composite organisms consisting of a symbiotic organism composed of a fungus with a photosynthetic partner , usually either a green alga or cyanobacterium...
s in the family
Family (biology)
In biological classification, family is* a taxonomic rank. Other well-known ranks are life, domain, kingdom, phylum, class, order, genus, and species, with family fitting between order and genus. As for the other well-known ranks, there is the option of an immediately lower rank, indicated by the...
Cladoniaceae
Cladoniaceae
The Cladoniaceae are a family of lichenized fungi in the order Lecanorales. The reindeer moss and cup lichens belong to this family.-Genera:*Calathaspis*Carassea*Cetradonia*Cladia*Cladonia*Gymnoderma*Heterodea...
. They are the primary food source for reindeer
Reindeer
The reindeer , also known as the caribou in North America, is a deer from the Arctic and Subarctic, including both resident and migratory populations. While overall widespread and numerous, some of its subspecies are rare and one has already gone extinct.Reindeer vary considerably in color and size...
and caribou. Cladonia species
Species
In biology, a species is one of the basic units of biological classification and a taxonomic rank. A species is often defined as a group of organisms capable of interbreeding and producing fertile offspring. While in many cases this definition is adequate, more precise or differing measures are...
are of economic importance to reindeer-herders, such as the Sami
Sami people
The Sami people, also spelled Sámi, or Saami, are the arctic indigenous people inhabiting Sápmi, which today encompasses parts of far northern Sweden, Norway, Finland, the Kola Peninsula of Russia, and the border area between south and middle Sweden and Norway. The Sámi are Europe’s northernmost...
in Scandinavia
Scandinavia
Scandinavia is a cultural, historical and ethno-linguistic region in northern Europe that includes the three kingdoms of Denmark, Norway and Sweden, characterized by their common ethno-cultural heritage and language. Modern Norway and Sweden proper are situated on the Scandinavian Peninsula,...
or the Nenets
Nenets
Nenets may refer to:*Nenets Autonomous Okrug, a federal subject of Russia*Yamalo-Nenets Autonomous Okrug, a federal subject of Russia*Nenets people, a Samoyedic people...
in Russia
Russia
Russia or , officially known as both Russia and the Russian Federation , is a country in northern Eurasia. It is a federal semi-presidential republic, comprising 83 federal subjects...
. Antibiotic
Antibiotic
An antibacterial is a compound or substance that kills or slows down the growth of bacteria.The term is often used synonymously with the term antibiotic; today, however, with increased knowledge of the causative agents of various infectious diseases, antibiotic has come to denote a broader range of...
compounds are extracted from some species to create antibiotic cream. The light green species Cladonia stellaris
Cladonia stellaris
Cladonia stellaris is an ecologically important species of lichen that forms continuous mats over large areas of the ground in boreal and arctic regions around the circumpolar north. The species is a preferred food source of reindeer and caribou during the winter months, and it has an important...
is used in flower
Flower
A flower, sometimes known as a bloom or blossom, is the reproductive structure found in flowering plants . The biological function of a flower is to effect reproduction, usually by providing a mechanism for the union of sperm with eggs...
decorations.

Cladonia perforata
Cladonia perforata
Cladonia perforata is a rare species of lichen known by the common names Florida perforate cladonia and Florida perforate reindeer lichen. It is endemic to the state of Florida in the United States, where it is known from 16 populations in four widely separated areas of the state...
("perforate cladonia") is one of two on the U.S.
United States
The United States of America is a federal constitutional republic comprising fifty states and a federal district...
Endangered Species List, and it should never be collected. It exists only in a few small populations in Florida
Florida
Florida is a state in the southeastern United States, located on the nation's Atlantic and Gulf coasts. It is bordered to the west by the Gulf of Mexico, to the north by Alabama and Georgia and to the east by the Atlantic Ocean. With a population of 18,801,310 as measured by the 2010 census, it...
.

Several Cladonia species grow on sand dune
Dune
In physical geography, a dune is a hill of sand built by wind. Dunes occur in different forms and sizes, formed by interaction with the wind. Most kinds of dunes are longer on the windward side where the sand is pushed up the dune and have a shorter "slip face" in the lee of the wind...
s. The presence, and luxuriant carpet-like growth, of Cladonia species is one of the defining characters of grey dune
Grey dune
Grey dunes are fixed, stable sand dunes located 50–100 m from the edge of the ocean. Grey dunes occur on the landward side of bare white dunes. They are so named due to the presence of grasses and lichens such as the Cladonia species. This creates the characteristic grey colour....
, a priority habitat
Habitat (ecology)
A habitat is an ecological or environmental area that is inhabited by a particular species of animal, plant or other type of organism...
for conservation under the E.U.
European Union
The European Union is an economic and political union of 27 independent member states which are located primarily in Europe. The EU traces its origins from the European Coal and Steel Community and the European Economic Community , formed by six countries in 1958...
Habitats Directive.

Cladonia species are used as food plants by the larva
Larva
A larva is a distinct juvenile form many animals undergo before metamorphosis into adults. Animals with indirect development such as insects, amphibians, or cnidarians typically have a larval phase of their life cycle...
e of some Lepidoptera
Lepidoptera
Lepidoptera is a large order of insects that includes moths and butterflies . It is one of the most widespread and widely recognizable insect orders in the world, encompassing moths and the three superfamilies of butterflies, skipper butterflies, and moth-butterflies...
species including Chionodes continuella
Chionodes
Chionodes is a genus of moths of the family Gelechiidae. Members of this group can be found in most parts of the world. Many species of this genus utilize Douglas-fir as a host plant for their larvae.-Species:Species in this genus include:...
.