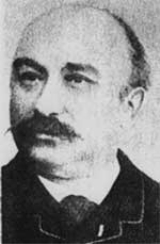 Encyclopedia
Clément Ader was a French inventor and engineer born in Muret
Muret
Muret is a commune in the Haute-Garonne department in southwestern France.It is an outer suburb of the city of Toulouse, even though it does not belong to Greater Toulouse, which it has declined to join...
, Haute Garonne, and is remembered primarily for his pioneering work in aviation
Aviation
Aviation is the design, development, production, operation, and use of aircraft, especially heavier-than-air aircraft. Aviation is derived from avis, the Latin word for bird.-History:...
.

Ader was an innovator in a number of electrical and mechanical engineering
Mechanical engineering
Mechanical engineering is a discipline of engineering that applies the principles of physics and materials science for analysis, design, manufacturing, and maintenance of mechanical systems. It is the branch of engineering that involves the production and usage of heat and mechanical power for the...
fields. He originally studied electrical engineering
Electrical engineering
Electrical engineering is a field of engineering that generally deals with the study and application of electricity, electronics and electromagnetism. The field first became an identifiable occupation in the late nineteenth century after commercialization of the electric telegraph and electrical...
, and in 1878 improved on the telephone
Telephone
The telephone , colloquially referred to as a phone, is a telecommunications device that transmits and receives sounds, usually the human voice. Telephones are a point-to-point communication system whose most basic function is to allow two people separated by large distances to talk to each other...
invented by Alexander Graham Bell
Alexander Graham Bell
Alexander Graham Bell was an eminent scientist, inventor, engineer and innovator who is credited with inventing the first practical telephone....
. After this he established the telephone network in Paris in 1880. In 1881, he invented the "théâtrophone
Théâtrophone
Théâtrophone was a telephonic distribution system that allowed the subscribers to listen to opera and theatre performances over the telephone lines. The théâtrophone evolved from a Clément Ader invention, which was first demonstrated in 1881, in Paris...
", a system of telephonic transmission where listeners received a separate channel for each ear, enabling stereophonic perception of the actors on a set; it was this invention which gave the first stereo
Stereophonic sound
The term Stereophonic, commonly called stereo, sound refers to any method of sound reproduction in which an attempt is made to create an illusion of directionality and audible perspective...
transmission of opera performances, over a distance of 2 miles (3 km) in 1881. In 1903, he devised a V8 engine
V8 engine
A V8 engine is a V engine with eight cylinders mounted on the crankcase in two banks of four cylinders, in most cases set at a right angle to each other but sometimes at a narrower angle, with all eight pistons driving a common crankshaft....
for the Paris-Madrid race
Paris-Madrid race
The Paris–Madrid race of May 1903 was an early experiment in auto racing, organized by the Automobile Club de France and by the Spanish Automobile Club, Automóvil Club Español....
, but although three or four were produced, none were sold.

Following this, he turned to the problem of mechanical flight and until the end of his life gave much time and money to this. Using the studies of Louis Pierre Mouillard
Louis Pierre Mouillard
Louis Pierre Mouillard was a Frenchman who worked on flight in the second half of the 19th century. His thesis, partly based on the investigation of birds in Alexandria, were later adopted by the Wright brothers as their own.He published numerous essays...
(1834–1897) on the flight of birds, he constructed his first flying machine
First flying machine
There are conflicting views as to what was the first flying machine.Much of the debate surrounding records of early flying machines depends on the exact definition of what constitutes a "flying machine", "flight", and even "first"....
in 1886, the Éole. It was a bat-like design run by a lightweight steam engine
Steam engine
A steam engine is a heat engine that performs mechanical work using steam as its working fluid.Steam engines are external combustion engines, where the working fluid is separate from the combustion products. Non-combustion heat sources such as solar power, nuclear power or geothermal energy may be...
of his own invention, with 4 cylinders developing 20 horsepower
Horsepower
Horsepower is the name of several units of measurement of power. The most common definitions equal between 735.5 and 750 watts.Horsepower was originally defined to compare the output of steam engines with the power of draft horses in continuous operation. The unit was widely adopted to measure the...
(15 kW), driving a four-blade propeller
Propeller
A propeller is a type of fan that transmits power by converting rotational motion into thrust. A pressure difference is produced between the forward and rear surfaces of the airfoil-shaped blade, and a fluid is accelerated behind the blade. Propeller dynamics can be modeled by both Bernoulli's...
. The engine weighed no more than 4 kg/kW (7 pounds per horsepower). The wings had a span of 14 metres and were equipped with a system of warping. All-up weight was 300 kg (650 pounds). On 9 October 1890, Ader attempted a flight of the Éole. It is accepted that the aircraft took off, reaching a height of 20 cm, and flew uncontrolled for approximately 50 m (164 ft),
13 years before the Wright Brothers
Wright brothers
The Wright brothers, Orville and Wilbur , were two Americans credited with inventing and building the world's first successful airplane and making the first controlled, powered and sustained heavier-than-air human flight, on December 17, 1903...
.

Ader undertook the construction of a second aircraft he called the Avion II, also referred to as the Zephyr or Éole II. Most sources agree that work on this aircraft was never completed, and it was abandoned in favour of the Avion III. The Ader's later claim that he flew the Avion II in August 1892 for a distance of 100 metres in Satory
Satory
Satory is an area south of Versailles in France. It is mostly known for its military camp, housing:* Weapon-testing facilities of GIAT Industries* Barracks and facilities for gendarmerie including the GIGN headquarters and the gendarmerie armored squadron...
near Paris, was never widely accepted.

Ader's progress attracted the interest of the minister of war, Charles de Freycinet
Charles de Freycinet
Charles Louis de Saulces de Freycinet was a French statesman and Prime Minister during the Third Republic; he belonged to the Opportunist Republicans faction. He was elected a member of the Academy of Sciences, and in 1890, the fourteen member to occupy seat the Académie française.-Early years:He...
. With the backing of the French War Office, Ader developed and constructed the Avion III. It was like an enormous bat made of linen and wood, with a 16 yards (14.6 m) wingspan, equipped with two four bladed tractor
Tractor configuration
thumb|right|[[Evektor-Aerotechnik|Aerotechnik EV97A Eurostar]], a tractor configuration aircraft, being pulled into position by its pilot for refuelling....
propellers , each powered by a steam engine of 30 hp (22 kW). Using a circular track at Satory, Ader carried out taxying trials on 12 October 1897 and two days later attempted a flight. After a short run the machine was caught by a gust of wind, slewed off the track, and came to a stop. After this the French army withdrew its funding, but kept the results secret. After the Wright brothers
Wright brothers
The Wright brothers, Orville and Wilbur , were two Americans credited with inventing and building the world's first successful airplane and making the first controlled, powered and sustained heavier-than-air human flight, on December 17, 1903...
made their flight, the commission released in November 1910 the official reports on Ader's attempted flights, stating that they were unsuccessful.

Clément Ader remained an active proponent of the development of aviation. In 1909 he published L'Aviation Militaire
L'Aviation Militaire
"L'Aviation Militaire" was a book written by the French inventor Clément Ader and published in 1909 by the Paris publisher Berger-Levrault. The book was essentially based on ideas developed by Ader at the end of the 19th century, which were arranged in final form in 1907...
, a very popular book which went through 10 editions in the five years before the First World War. It is notable for its vision of air warfare and its foreseeing the form of the modern aircraft carrier
Aircraft carrier
An aircraft carrier is a warship designed with a primary mission of deploying and recovering aircraft, acting as a seagoing airbase. Aircraft carriers thus allow a naval force to project air power worldwide without having to depend on local bases for staging aircraft operations...
, with a flat flight deck, an island superstructure, deck elevators and a hangar bay. His idea for an aircraft carrier was relayed by the US Naval Attaché in Paris and were followed by the first trials in the United States in November 1910. 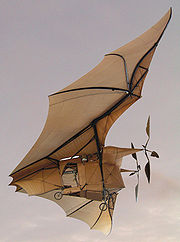 Ader is still admired for his early powered flight efforts, and his aircraft gave the French language the word avion for a heavier-than-air aircraft. In 1938, France issued a postage stamp
Postage stamp
A postage stamp is a small piece of paper that is purchased and displayed on an item of mail as evidence of payment of postage. Typically, stamps are made from special paper, with a national designation and denomination on the face, and a gum adhesive on the reverse side...
honoring him. Airbus
Airbus
Airbus SAS is an aircraft manufacturing subsidiary of EADS, a European aerospace company. Based in Blagnac, France, surburb of Toulouse, and with significant activity across Europe, the company produces around half of the world's jet airliners....
named one of its aircraft assembly sites in Toulouse
Toulouse
Toulouse is a city in the Haute-Garonne department in southwestern FranceIt lies on the banks of the River Garonne, 590 km away from Paris and half-way between the Atlantic Ocean and the Mediterranean Sea...
after him.