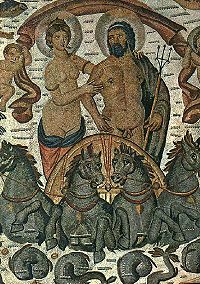 Cirta was the capital city of the ancient Kingdom of Numidia
Numidia
Numidia was an ancient Berber kingdom in part of present-day Eastern Algeria and Western Tunisia in North Africa. It is known today as the Chawi-land, the land of the Chawi people , the direct descendants of the historical Numidians or the Massyles The kingdom began as a sovereign state and later...
in northern Africa
Africa
Africa is the world's second largest and second most populous continent, after Asia. At about 30.2 million km² including adjacent islands, it covers 6% of the Earth's total surface area and 20.4% of the total land area...
(modern Algeria
Algeria
Algeria , officially the People's Democratic Republic of Algeria , also formally referred to as the Democratic and Popular Republic of Algeria, is a country in the Maghreb region of Northwest Africa with Algiers as its capital.In terms of land area, it is the largest country in Africa and the Arab...
). Its strategically important port city was Russicada
Russicada
Russicada was the Mediterranean port city serving Cirta, the capital of the Kingdom of Numidia in Ancient Algeria. It overlooked the straits between Sicily and Numidia , an important place in geopolitical strategies at the time.-Literature:...
. Although Numidia was a key ally of the ancient Roman Republic
Roman Republic
The Roman Republic was the period of the ancient Roman civilization where the government operated as a republic. It began with the overthrow of the Roman monarchy, traditionally dated around 508 BC, and its replacement by a government headed by two consuls, elected annually by the citizens and...
during the Punic Wars
Punic Wars
The Punic Wars were a series of three wars fought between Rome and Carthage from 264 B.C.E. to 146 B.C.E. At the time, they were probably the largest wars that had ever taken place...
(264 BC-146 BC), Cirta was subject to Roman invasions during the 1st and 2nd centuries BC, eventually falling under Roman dominion during the rule of Julius Caesar
Julius Caesar
Gaius Julius Caesar was a Roman general and statesman and a distinguished writer of Latin prose. He played a critical role in the gradual transformation of the Roman Republic into the Roman Empire....
. The city was destroyed in the beginning of the 4th century and was rebuilt by the Roman Emperor Constantine the Great, who gave his name to the newly constructed city, Constantine
Constantine, Algeria
Constantine is the capital of Constantine Province in north-eastern Algeria. It was the capital of the same-named French département until 1962. Slightly inland, it is about 80 kilometres from the Mediterranean coast, on the banks of Rhumel river...
.


Roman influence before 46 BC

Cirta's populace was as diverse as the Roman Republic itself — alongside native Numidians were Carthaginians
Carthage
Carthage , implying it was a 'new Tyre') is a major urban centre that has existed for nearly 3,000 years on the Gulf of Tunis, developing from a Phoenician colony of the 1st millennium BC...
displaced by the Second
Second Punic War
The Second Punic War, also referred to as The Hannibalic War and The War Against Hannibal, lasted from 218 to 201 BC and involved combatants in the western and eastern Mediterranean. This was the second major war between Carthage and the Roman Republic, with the participation of the Berbers on...
and Third Punic War
Third Punic War
The Third Punic War was the third and last of the Punic Wars fought between the former Phoenician colony of Carthage, and the Roman Republic...
s, as well as Greeks, Romans, and Italians. It served as an economic hub for Rome’s African empire, as it was inhabited by Roman and Italian merchants, bankers, and businessmen. Even prior to Cirta’s fall to Julius Caesar, these economic elites constituted an important segment of the city's population, as they kept it within Rome’s sphere of influence without having to be directly controlled.

Not only was Cirta an important economic site, it was also a key political and military spot within the African kingdoms. During the Second Punic War, the Battle of Cirta
Battle of Cirta
The Battle of Cirta was a battle during the Second Punic War between the forces of the Roman Republic under Publius Cornelius Scipio and Carthage's main ally, Syphax....
(203 BC) marked a decisive Roman victory for Scipio Africanus
Scipio Africanus
Publius Cornelius Scipio Africanus , also known as Scipio Africanus and Scipio the Elder, was a general in the Second Punic War and statesman of the Roman Republic...
against Rome's most formidable rival in the Mediterranean — Carthage. Moreover, Rome illustrated its willingness to defend its interests in Cirta into the late 2nd century BC following the death of Micipsa
Micipsa
Micipsa was the eldest legitimate son of Masinissa, the King of Numidia, in the Ancient Algerian Maghreb of North Africa. He became the King of Numidia.-Early life:...
, King of Numidia, in 118 BC. A power struggle ensued between his adopted son Jugurtha
Jugurtha
Jugurtha or Jugurthen was a King of Numidia, , born in Cirta .-Background:Until the reign of Jugurtha's grandfather Masinissa, the people of Numidia were semi-nomadic and indistinguishable from the other Libyans in North Africa...
and his natural son Adherbal
Adherbal
Adherbal, son of Micipsa and grandson of Masinissa, was a king of Numidia between 118 BC and 112 BC. He inherited the throne after the death of his father, and ruled jointly with his younger brother Hiempsal, and Jugurtha, the nephew of Masinissa...
. Adherbal appealed to Rome to help broker a truce and to help evenly split the kingdom between the two heirs. Despite a senatorial commission’s seemingly successful mediation, Jugurtha besieged Cirta, killing Adherbal and Italian elites who defended him. Subsequently, Rome declared war on the kingdom to assert its hegemony in the region and to defend those citizens who lived outside of the homeland. Jugurtha’s defeat at Cirta at the hands of the Roman army is commonly referred to as the Jugurthine War
Jugurthine War
The Jugurthine War takes its name from the Berber king Jugurtha , nephew and later adopted son of Micipsa, King of Numidia.-Jugurtha and Numidia:...
.

Caesar's conquest of Northern Africa officially brought Cirta under direct Roman rule in 46 BC. It was during the rule of Augustus
Augustus
Augustus ;23 September 63 BC – 19 August AD 14) is considered the first emperor of the Roman Empire, which he ruled alone from 27 BC until his death in 14 AD.The dates of his rule are contemporary dates; Augustus lived under two calendars, the Roman Republican until 45 BC, and the Julian...
, however, when Cirta's territory expanded and assimilated into the empire. Augustus split Cirta into communities, or pagis, dividing Numidians and newly settled Romans. In 26 BC, the emperor attempted to increase Roman settlement in the city by supplementing the Sittiani — followers of Sittius, a man whom Julius Caesar had personally appointed to "Romanize" the city. This helped facilitate Cirta's assumption into the Roman realm, culturally and economically. These settlers, of course, were augmenting those Romans who had inhabited the city since the earlier periods of the Punic Wars, namely the Italian business elite.

In the first two centuries AD Christianity
Christianity
Christianity is a monotheistic religion based on the life and teachings of Jesus as presented in canonical gospels and other New Testament writings...
began to take root in Cirta. While little remains of African Christianity before 200, records of martyred Christians at Cirta existed by mid-century. Civil war in 311 marked the destruction of the city, however, the first Christian emperor Constantine rebuilt it in his own name in 313, calling it Constantine.