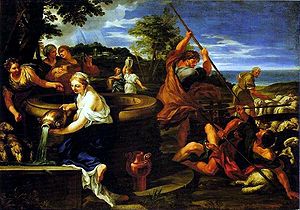 Ciro Ferri was an Italian
Italy
Italy , officially the Italian Republic languages]] under the European Charter for Regional or Minority Languages. In each of these, Italy's official name is as follows:;;;;;;;;), is a unitary parliamentary republic in South-Central Europe. To the north it borders France, Switzerland, Austria and...
Baroque
Baroque
The Baroque is a period and the style that used exaggerated motion and clear, easily interpreted detail to produce drama, tension, exuberance, and grandeur in sculpture, painting, literature, dance, and music...
sculptor and painter, the chief pupil and successor of Pietro da Cortona
Pietro da Cortona
Pietro da Cortona, by the name of Pietro Berrettini, born Pietro Berrettini da Cortona, was the leading Italian Baroque painter of his time and also one of the key architects in the emergence of Roman Baroque architecture. He was also an important decorator...
.

He was born in Rome
Rome
Rome is the capital of Italy and the country's largest and most populated city and comune, with over 2.7 million residents in . The city is located in the central-western portion of the Italian Peninsula, on the Tiber River within the Lazio region of Italy.Rome's history spans two and a half...
, where he began working under Cortona and with a team of artists in the extensive fresco decorations of the Quirinal Palace
Quirinal Palace
The Quirinal Palace is a historical building in Rome, Italy, the current official residence of the President of the Italian Republic. It is located on the Quirinal Hill, the tallest of the seven hills of Rome...
(1656-1659). He collaborated with Cortona and completed for him the extensive frescoed ceilings and other internal decorations begun in the Pitti Palace, Florence
Florence
Florence is the capital city of the Italian region of Tuscany and of the province of Florence. It is the most populous city in Tuscany, with approximately 370,000 inhabitants, expanding to over 1.5 million in the metropolitan area....
(1659-1665). His independent masterpiece is considered an extensive series of scriptural frescoes in the church of Basilica di Santa Maria Maggiore (Bergamo). In addition, also well known is his an altarpiece of St Ambrose Healing the Sick in the church of Sant'Ambrogio della Massima
Sant'Ambrogio della Massima
Sant'Ambrogio della Massima is a Roman Catholic church in Rome, Italy that perhaps dates to the 4th century, and was a convent in the 18th century. It is said to have been associated with Saint Ambrose....
in Rome.

In 1670, he began the painting of the cupola of Sant'Agnese in Agone
Sant'Agnese in Agone
Sant'Agnese in Agone is a seventeenth century Baroque church in Rome, Italy. It faces onto the Piazza Navona, one of the main urban spaces in the historic centre of the city and the site where the Early Christian Saint Agnes was martyred in the ancient Stadium of Domitian.The rebuilding of the...
in central Rome, in a style recalling of Lanfranco's
Giovanni Lanfranco
Giovanni Lanfranco was an Italian painter of the Baroque period.-Biography:Giovanni Gaspare Lanfranco was born in Parma, the third son of Stefano and Cornelia Lanfranchi, and was placed as a page in the household of Count Orazio Scotti...
work in the dome of Sant'Andrea della Valle
Sant'Andrea della Valle
Sant'Andrea della Valle is a basilica church in Rome, Italy, in the rione of Sant'Eustachio. The basilica is the general seat for the religious order of the Theatines.-Overview:...
; but died before it was completed in 1693 by his successor Sebastiano Corbellini.

He executed also a large amount of miscellaneous designs, such as etchings and frontispieces for books; and served as an architect as well. Ferri was appointed to direct the Florentine students in Rome, and Gabbiani was one of his leading pupils. As regards style, Ferri ranks as chief of the grand manner of Cortona, as opposed to the more sober and spare style promulgated by Andrea Sacchi
Andrea Sacchi
Andrea Sacchi was an Italian painter of High Baroque Classicism, active in Rome. A generation of artists who shared his style of art include the painters Nicolas Poussin and Giovanni Battista Passeri, the sculptors Alessandro Algardi and François Duquesnoy, and the contemporary biographer Giovanni...
, and continued by Carlo Maratta
Carlo Maratta
Carlo Maratta or Maratti was an Italian painter, active mostly in Rome, and known principally for his classicizing paintings executed in a Late Baroque Classical manner. Although he is part of the classical tradition stemming from Raphael, he was not exempt from the influence of Baroque painting...
and others. The 1911 Britannica refers to this as the so-called Machinists movement. Among the many pupils and assistants were Ambrogio Besozzi
Ambrogio Besozzi
Ambrogio Besozzi was an Italian painter of the Baroque period.He was born in Milan where his first training was with Gioseffo Danedi, il Montalto. He is also known as Giovanni Ambrogio Besozzi. Assisted Ciro Ferri in Rome with work in quadratura and decoration. He returned to Milan, then Turin. He...
, Camillo Gabrielli, Martiale Carpioni, Filippo Maria Galetti, Benedetto Luti
Benedetto Luti
Benedetto Luti was an Italian painter.-Biography:Luti was born in Florence. He moved to Rome in 1691 where he was patronized by Cosimo III de' Medici, Grand Duke of Tuscany, an enthusiast for the pastel portrait. Luti was one of the first artists to work in pastels as the final composition as...
, Giovanni Battista Marmi
Giovanni Battista Marmi
Giovanni Battista Marmi was an Italian painter of the Baroque period. He initially apprenticed with Vincenzo Dandini, then Livio Mehus, then moved to Rome to become a pupil of the painter Ciro Ferri and Giovanni Maria Morandi.-References:...
, Pietro Montanini
Pietro Montanini
Pietro Montanini , also called Petruccio Perugino, was an Italian painter of the Baroque period. He was born in Perugia and first apprenticed with the painter Ciro Ferri, then Salvator Rosa.-References:...
, Giuseppe Nasini, Giovanni Odazzi
Giovanni Odazzi
Giovanni Odazzi was an Italian painter and etcher of the Baroque period, active mainly in Rome.He was a pupil of Ciro Ferri, then worked under the guidance of Giovanni Battista Gaulli. He also worked with Cornelis Bloemaert...
, Tommaso Redi
Tommaso Redi (painter)
Tommaso Redi was an Italian painter, who was active during the late-Baroque in his native Florence.He initially apprenticed with the Florentine painter Anton Domenico Gabbiani , and then moved to Rome to work in the Medici Academy in that city, which employed Carlo Maratti and Ciro Ferri as teachers...
, and Urbano Romanelli
Urbano Romanelli
Urbano Romanelli was an Italian painter of the Baroque period.He was born in Viterbo, the son of the painter, Giovanni Francesco Romanelli. After his father died, he entered the studio of Ciro Ferri in Rome. He painted in Rome and in churches at Velletri and Viterbo.-References:...
.

Ciro Ferri became a member of the Accademia di San Luca
Accademia di San Luca
The Accademia di San Luca, was founded in 1577 as an association of artists in Rome, under the directorship of Federico Zuccari, with the purpose of elevating the work of "artists", which included painters, sculptors and architects, above that of mere craftsmen. Other founders included Girolamo...
on 3 June 1657. His ciborium for the high altar of Santa Maria in Vallicella
Santa Maria in Vallicella
Santa Maria in Vallicella, also called Chiesa Nuova, is a church in Rome, Italy, which today faces onto the main thoroughfare of the Corso Vittorio Emanuele...
is a masterpieces of 17th-century bronze decorative sculpture. He continued under the patronage of the Medici, when together with the sculptor Ercole Ferrata
Ercole Ferrata
Ercole Ferrata was an Italian sculptor of the Roman Baroque.-Biography:A native of Pellio Inferiore, near Como, Ferrata initially apprenticed with Alessandro Algardi, and became one of his prime assistants...
, Ferri the painter led the Medici Academy in Rome, established in 1673 by Grand Duke Cosimo III of Tuscany. Among the pupils sent there from Florence were Anton Domenico Gabbiani
Anton Domenico Gabbiani
Anton Domenico Gabbiani was an Italian painter and active in a late Baroque style.-Biography:Born in Florence, Gabbiani first apprenticed with the Medici court portrait painter Justus Sustermans, then with the Florentine Vincenzo Dandini; subsequently moved to Rome in 1673 he arrived in Rome,...
, Giovanni Battista Foggini
Giovanni Battista Foggini
thumb|Tomb of [[Galileo Galilei]] in [[Santa Croce, Florence]].Giovanni Battista Foggini was an Italian sculptor active in Florence, renowned mainly for small bronze statuary.-Biography:...
, Atanasio Bimbacci, Carlo Marcellini, and Massimiliano Soldani Benzi
Massimiliano Soldani Benzi
Massimiliano Soldani-Benzi or Massimiliano Soldani was an Italian sculptor and medallist, mainly active in Florence....

Ferri was also responsible for the Reliquary
Reliquary
A reliquary is a container for relics. These may be the physical remains of saints, such as bones, pieces of clothing, or some object associated with saints or other religious figures...
of the Arm of St. John the Baptist which is found in the St John's Co-Cathedral
St John's Co-Cathedral
St. Johns Co-Cathedral , located in Valletta, Malta, was built by the Knights of Malta between 1573 and 1578, having been commissioned in 1572 by Grand Master Jean de la Cassière as the conventual church of the Order of the Knights Hospitaller of St John, known as the Knights of Malta...
in Malta
Malta
Malta , officially known as the Republic of Malta , is a Southern European country consisting of an archipelago situated in the centre of the Mediterranean, south of Sicily, east of Tunisia and north of Libya, with Gibraltar to the west and Alexandria to the east.Malta covers just over in...
.