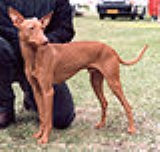 
The Cirneco dell'Etna (plural Cirnechi) is a small breed
Dog breed
Dog breeds are groups of closely related and visibly similar domestic dogs, which are all of the subspecies Canis lupus familiaris, having characteristic traits that are selected and maintained by humans, bred from a known foundation stock....
of dog
Dog
The domestic dog is a domesticated form of the gray wolf, a member of the Canidae family of the order Carnivora. The term is used for both feral and pet varieties. The dog may have been the first animal to be domesticated, and has been the most widely kept working, hunting, and companion animal in...
originally from Sicily
Sicily
Sicily is a region of Italy, and is the largest island in the Mediterranean Sea. Along with the surrounding minor islands, it constitutes an autonomous region of Italy, the Regione Autonoma Siciliana Sicily has a rich and unique culture, especially with regard to the arts, music, literature,...
. This hound
Hound
A hound is a type of dog that assists hunters by tracking or chasing the animal being hunted. It can be contrasted with the gun dog, which assists hunters by identifying the location of prey, and with the retriever, which recovers shot quarry...
was historically used to hunt rabbit
Rabbit
Rabbits are small mammals in the family Leporidae of the order Lagomorpha, found in several parts of the world...
s and can work for hours without food or water. The breed also has a keen sense of smell and is primarily built for endurance over harsh terrain such as that of Mount Etna
Mount Etna
Mount Etna is an active stratovolcano on the east coast of Sicily, close to Messina and Catania. It is the tallest active volcano in Europe, currently standing high, though this varies with summit eruptions; the mountain is 21 m higher than it was in 1981.. It is the highest mountain in...
. It is the smallest of the Mediterranean island hunting hounds, the others being the Pharaoh Hound
Pharaoh Hound
The Pharaoh Hound is a breed of dog and the national hound of the Mediterranean nation of Malta. Its native name is Kelb tal-Fenek in Maltese, which means "rabbit hound". The dog is the traditional hunting companion of Maltese outdoorsmen. The breed has no conclusive links with Ancient Egypt and...
s and Ibizan Hound
Ibizan Hound
The Ibizan Hound , pronounced "I-bee-zan" or "I-beeth-an", is a lean, agile dog of the hound family. There are two hair types of the breed: smooth and wire. The more commonly seen type is the smooth...
s.

Today they are increasingly kept for the sport of conformation show
Conformation show
Conformation shows, also referred to as breed shows, are a kind of dog show in which a judge familiar with a specific dog breed evaluates individual purebred dogs for how well the dogs conform to the established breed type for their breed, as described in a breed's individual breed standard.A...
ing and as pet
Pet
A pet is a household animal kept for companionship and a person's enjoyment, as opposed to wild animals or to livestock, laboratory animals, working animals or sport animals, which are kept for economic or productive reasons. The most popular pets are noted for their loyal or playful...
s, due to their low coat maintenance and friendly nature, although as an active hound they do need regular exercise. A Cirneco should measure from 43-51 cm (17-20in) and weigh between 10–12 kg (22-26lb). As with other breeds, those from hunting stock can lie outside these ranges.