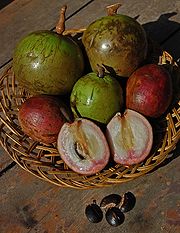 Chrysophyllum cainito is a tropical tree of the family Sapotaceae
Sapotaceae
Sapotaceae is a family of flowering plants, belonging to order Ericales. The family includes approximately 800 species of evergreen trees and shrubs in approximately 65 genera . Distribution is pantropical....
, native to the lowlands of Central America
Central America
Central America is the central geographic region of the Americas. It is the southernmost, isthmian portion of the North American continent, which connects with South America on the southeast. When considered part of the unified continental model, it is considered a subcontinent...
and the West Indies. It grows rapidly and reaches 20 m in height.

It has numerous common names including cainito, caimito, star apple, golden leaf tree, abiaba, pomme du lait, estrella, milk fruit and aguay. It is also known by the synonym
Synonym (taxonomy)
In scientific nomenclature, a synonym is a scientific name that is or was used for a taxon of organisms that also goes by a different scientific name. For example, Linnaeus was the first to give a scientific name to the Norway spruce, which he called Pinus abies...
Achras cainito. In Vietnam
Vietnam
Vietnam – sometimes spelled Viet Nam , officially the Socialist Republic of Vietnam – is the easternmost country on the Indochina Peninsula in Southeast Asia. It is bordered by China to the north, Laos to the northwest, Cambodia to the southwest, and the South China Sea –...
, it is called vú sữa (literally: breast-milk).

The leaves
Leaf
A leaf is an organ of a vascular plant, as defined in botanical terms, and in particular in plant morphology. Foliage is a mass noun that refers to leaves as a feature of plants....
are evergreen
Evergreen
In botany, an evergreen plant is a plant that has leaves in all seasons. This contrasts with deciduous plants, which completely lose their foliage during the winter or dry season.There are many different kinds of evergreen plants, both trees and shrubs...
, alternate, simple oval, entire, 5–15 cm long; the underside shines with a golden color when seen from a distance. The tiny flower
Flower
A flower, sometimes known as a bloom or blossom, is the reproductive structure found in flowering plants . The biological function of a flower is to effect reproduction, usually by providing a mechanism for the union of sperm with eggs...
s are purplish white and have a sweet fragrant smell. The tree is also hermaphroditic (self-fertile).

It has round, purple-skinned fruit
Fruit
In broad terms, a fruit is a structure of a plant that contains its seeds.The term has different meanings dependent on context. In non-technical usage, such as food preparation, fruit normally means the fleshy seed-associated structures of certain plants that are sweet and edible in the raw state,...
that is often green around the calyx, with a star pattern in the pulp. Sometimes there is a greenish-white or yellow variety of the fruit. The skin is rich in latex, and both it and the rind are not edible. The flattened seed
Seed
A seed is a small embryonic plant enclosed in a covering called the seed coat, usually with some stored food. It is the product of the ripened ovule of gymnosperm and angiosperm plants which occurs after fertilization and some growth within the mother plant...
s are light brown and hard. It bears fruit year around after it reaches about seven years of age.

The fruits are delicious as a fresh dessert fruit; it is sweet and best served chilled. Infusions of the leaves have been used against diabetes and articular rheumatism
Rheumatism
Rheumatism or rheumatic disorder is a non-specific term for medical problems affecting the joints and connective tissue. The study of, and therapeutic interventions in, such disorders is called rheumatology.-Terminology:...
.
The fruit has anti-oxidant properties.,
The bark is considered a tonic and stimulant, and a bark decoction is used as an antitussive. The fruit also exist in three colors, dark purple, greenish brown and yellow. The purple fruit has a denser skin and texture while the greenish brown fruit has a thin skin and a more liquid pulp; the yellow variety is less common and difficult to find.

A number of closely related species, also called star apples, are grown in Africa, including C. albidum and C. africanum.

In Vietnam
Vietnam
Vietnam – sometimes spelled Viet Nam , officially the Socialist Republic of Vietnam – is the easternmost country on the Indochina Peninsula in Southeast Asia. It is bordered by China to the north, Laos to the northwest, Cambodia to the southwest, and the South China Sea –...
, the most famous variety is Lò Rèn milk fruit coming from Vĩnh Kim commune, Châu Thành district, Tiền Giang province.

The Nobel Prize
Nobel Prize
The Nobel Prizes are annual international awards bestowed by Scandinavian committees in recognition of cultural and scientific advances. The will of the Swedish chemist Alfred Nobel, the inventor of dynamite, established the prizes in 1895...
-winning poet Derek Walcott
Derek Walcott
Derek Alton Walcott, OBE OCC is a Saint Lucian poet, playwright, writer and visual artist who was awarded the Nobel Prize for Literature in 1992 and the T. S. Eliot Prize in 2011 for White Egrets. His works include the Homeric epic Omeros...
immortalizes the fruit as a symbol of the Caribbean
Caribbean
The Caribbean is a crescent-shaped group of islands more than 2,000 miles long separating the Gulf of Mexico and the Caribbean Sea, to the west and south, from the Atlantic Ocean, to the east and north...
itself in his 1979 collection, The Star-Apple Kingdom.