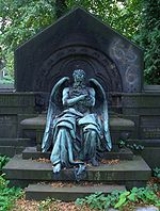 Encyclopedia
In Greek mythology
Greek mythology
Greek mythology is the body of myths and legends belonging to the ancient Greeks, concerning their gods and heroes, the nature of the world, and the origins and significance of their own cult and ritual practices. They were a part of religion in ancient Greece...
, Chronos (Ancient Greek: ) in pre-Socratic philosophical works is said to be the personification of time
Time
Time is a part of the measuring system used to sequence events, to compare the durations of events and the intervals between them, and to quantify rates of change such as the motions of objects....
. His name in Greek means "time" (and can also mean "year" in Modern Greek) and is alternatively spelled Chronus (Latin spelling) or Khronos.

Chronos was imagined as an incorporeal god, serpentine in form, with three heads—those of a man, a bull, and a lion. He and his consort, serpentine Ananke
Ananke (mythology)
In Greek mythology, Ananke, also spelled Anangke, Anance, or Anagke , was the personification of destiny, necessity and fate, depicted as holding a spindle. She marks the beginning of the cosmos, along with Chronos...
(Inevitability), circled the primal world egg
World egg
A world egg or cosmic egg is a mythological motif found in the creation myths of many cultures and civilizations. Typically, the world egg is a beginning of some sort, and the universe or some primordial being comes into existence by "hatching" from the egg, sometimes lain on the primordial waters...
in their coils and split it apart to form the ordered universe of earth, sea and sky. He is not to be confused with the Titan Cronus
Cronus
In Greek mythology, Cronus or Kronos was the leader and the youngest of the first generation of Titans, divine descendants of Gaia, the earth, and Uranus, the sky...
.

He was depicted in Greco-Roman mosaics as a man turning the Zodiac Wheel. Often the figure is named Aeon
Aeon
The word aeon, also spelled eon or æon , originally means "life", and/or "being", though it then tended to mean "age", "forever" or "for eternity". It is a Latin transliteration from the koine Greek word , from the archaic . In Homer it typically refers to life or lifespan...
(Eternal Time), a common alternative name for the god.

Chronos is usually portrayed through an old, wise man with a long, gray beard, such as "Father Time
Father Time
Father Time is usually depicted as an elderly bearded man, somewhat worse for wear, dressed in a robe, carrying a scythe and an hourglass or other timekeeping device...
". Some of the current English words whose etymological root is khronos/chronos include chronology
Chronology
Chronology is the science of arranging events in their order of occurrence in time, such as the use of a timeline or sequence of events. It is also "the determination of the actual temporal sequence of past events".Chronology is part of periodization...
, chronometer
Chronometer
Chronometer may refer to:* Chronometer watch, a watch tested and certified to meet certain precision standards* Hydrochronometer, a water clock* Marine chronometer, a timekeeper used for celestial navigation...
, chronic
Chronic (medicine)
A chronic disease is a disease or other human health condition that is persistent or long-lasting in nature. The term chronic is usually applied when the course of the disease lasts for more than three months. Common chronic diseases include asthma, cancer, diabetes and HIV/AIDS.In medicine, the...
, anachronism
Anachronism
An anachronism—from the Greek ανά and χρόνος — is an inconsistency in some chronological arrangement, especially a chronological misplacing of persons, events, objects, or customs in regard to each other...
, and chronicle
Chronicle
Generally a chronicle is a historical account of facts and events ranged in chronological order, as in a time line. Typically, equal weight is given for historically important events and local events, the purpose being the recording of events that occurred, seen from the perspective of the...
.


In the Orphic cosmogony the unageing Chronos produced Aither and Chaos
Chaos (cosmogony)
Chaos refers to the formless or void state preceding the creation of the universe or cosmos in the Greek creation myths, more specifically the initial "gap" created by the original separation of heaven and earth....
, and made a silvery egg in the divine Aither. It produced the hermaphroditic god Phanes
Phanes (mythology)
Phanes , or Protogonos , was the mystic primeval deity of procreation and the generation of new life, who was introduced into Greek mythology by the Orphic tradition; other names for this Classical Greek Orphic concept included Ericapaeus and Metis...
, who gave birth to the first generation of gods and is the ultimate creator of the cosmos
Cosmos
In the general sense, a cosmos is an orderly or harmonious system. It originates from the Greek term κόσμος , meaning "order" or "ornament" and is antithetical to the concept of chaos. Today, the word is generally used as a synonym of the word Universe . The word cosmos originates from the same root...
.

Pherecydes of Syros
Pherecydes of Syros
Pherecydes of Syros was a Greek thinker from the island of Syros, of the 6th century BC. Pherecydes authored the Pentemychos or Heptamychos, one of the first attested prose works in Greek literature, which formed an important bridge between mythic and pre-Socratic thought.- Life :Very little is...
in his lost Heptamychos (the seven recesses), around 6th century BC, claimed that there were three eternal principles: Chronos, Zas (Zeus
Zeus
In the ancient Greek religion, Zeus was the "Father of Gods and men" who ruled the Olympians of Mount Olympus as a father ruled the family. He was the god of sky and thunder in Greek mythology. His Roman counterpart is Jupiter and his Etruscan counterpart is Tinia.Zeus was the child of Cronus...
) and Chthonie (the chthonic
Chthonic
Chthonic designates, or pertains to, deities or spirits of the underworld, especially in relation to Greek religion. The Greek word khthon is one of several for "earth"; it typically refers to the interior of the soil, rather than the living surface of the land or the land as territory...
). The semen of Chronos was placed in the recesses and produced the first generation of gods.
The source of this article is wikipedia, the free encyclopedia.  The text of this article is licensed under the GFDL.