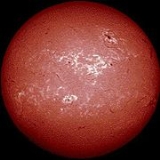 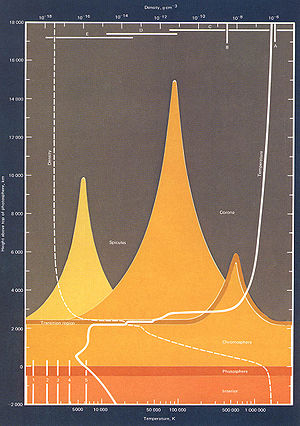 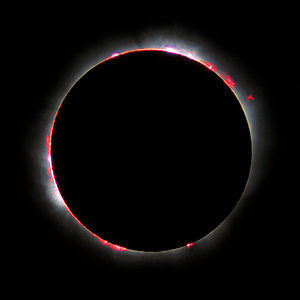 The chromosphere is a thin layer of the Sun
Sun
The Sun is the star at the center of the Solar System. It is almost perfectly spherical and consists of hot plasma interwoven with magnetic fields...
's atmosphere just above the photosphere
Photosphere
The photosphere of an astronomical object is the region from which externally received light originates. The term itself is derived from Ancient Greek roots, φῶς, φωτός/phos, photos meaning "light" and σφαῖρα/sphaira meaning "sphere", in reference to the fact that it is a spheric surface perceived...
, roughly 2,000 kilometers deep.

Although thin, its density increases over almost seven orders of magnitude (five million times) from a low of 1.0 × 10−11 kg/m3 (1.0 × 10−14 g/cm3) at its boundary with the solar transition region
Solar transition region
The solar transition region is a region of the Sun's atmosphere, between the chromosphere and corona. It is visible from space using telescopes that can sense ultraviolet...
, and increasing to a high of 2.0 × 10−4 kg/m3 (2.0 × 10−7 g/cm3) where it merges into the photosphere
Photosphere
The photosphere of an astronomical object is the region from which externally received light originates. The term itself is derived from Ancient Greek roots, φῶς, φωτός/phos, photos meaning "light" and σφαῖρα/sphaira meaning "sphere", in reference to the fact that it is a spheric surface perceived...
. See Figure 1. Skylab's solar atmosphere results chart for details of how its temperature and density vary with height.

The chromosphere is more visually transparent than the photosphere. The name comes from the fact that it has a reddish color, as the visual spectrum
Spectrum
A spectrum is a condition that is not limited to a specific set of values but can vary infinitely within a continuum. The word saw its first scientific use within the field of optics to describe the rainbow of colors in visible light when separated using a prism; it has since been applied by...
of the chromosphere is dominated by the deep red H-alpha
H-alpha
H-alpha is a specific red visible spectral line created by hydrogen with a wavelength of 656.28 nm, which occurs when a hydrogen electron falls from its third to second lowest energy level...
spectral line of hydrogen. The coloration may be seen directly with the naked eye only during a total solar eclipse
Solar eclipse
As seen from the Earth, a solar eclipse occurs when the Moon passes between the Sun and the Earth, and the Moon fully or partially blocks the Sun as viewed from a location on Earth. This can happen only during a new moon, when the Sun and the Moon are in conjunction as seen from Earth. At least...
, where the chromosphere is briefly visible as a flash of color just as the visible edge of the photosphere disappears behind the Moon
Moon
The Moon is Earth's only known natural satellite,There are a number of near-Earth asteroids including 3753 Cruithne that are co-orbital with Earth: their orbits bring them close to Earth for periods of time but then alter in the long term . These are quasi-satellites and not true moons. For more...
.

For reasons not fully understood, the temperature of the chromosphere is hotter than that of the photosphere. The photosphere is closer to the center of the sun and its temperature is around 4000 K
Kelvin
The kelvin is a unit of measurement for temperature. It is one of the seven base units in the International System of Units and is assigned the unit symbol K. The Kelvin scale is an absolute, thermodynamic temperature scale using as its null point absolute zero, the temperature at which all...
to 6400 K but the chromosphere is about 4500 K to as high as 20,000 K. One theory is that acoustic
Acoustics
Acoustics is the interdisciplinary science that deals with the study of all mechanical waves in gases, liquids, and solids including vibration, sound, ultrasound and infrasound. A scientist who works in the field of acoustics is an acoustician while someone working in the field of acoustics...
turbulence
Turbulence
In fluid dynamics, turbulence or turbulent flow is a flow regime characterized by chaotic and stochastic property changes. This includes low momentum diffusion, high momentum convection, and rapid variation of pressure and velocity in space and time...
is the source of this higher temperature, as the result of the dispersion
Dispersive mass transfer
Dispersive mass transfer, in fluid dynamics, is the spreading of mass from highly concentrated areas to less concentrated areas. It is one form of mass transfer....
of magnetohydrodynamic waves over the solar surface.

Without special equipment the chromosphere cannot normally be seen owing to its being washed out by the overwhelming brightness of the photosphere. It can be seen clearly through special narrow-band optical filters
Band-pass filter
A band-pass filter is a device that passes frequencies within a certain range and rejects frequencies outside that range.Optical band-pass filters are of common usage....
tuned to the H-alpha spectral line
Spectral line
A spectral line is a dark or bright line in an otherwise uniform and continuous spectrum, resulting from a deficiency or excess of photons in a narrow frequency range, compared with the nearby frequencies.- Types of line spectra :...
, and many observatories routinely observe the chromosphere using this technique, which displays filament
Solar prominence
A prominence is a large, bright feature extending outward from the Sun's surface, often in a loop shape. Prominences are anchored to the Sun's surface in the photosphere, and extend outwards into the Sun's corona...
s quite clearly. Filaments (and prominences, which are filaments viewed from the side) underlie many coronal mass ejection
Coronal mass ejection
A coronal mass ejection is a massive burst of solar wind, other light isotope plasma, and magnetic fields rising above the solar corona or being released into space....
s and hence are important to prediction of space weather
Space weather
Space weather is the concept of changing environmental conditions in near-Earth space or thespace from the Sun's atmosphere to the Earth's atmosphere. It is distinct from the concept ofweather within the Earth's planetary atmosphere...
.

The most common solar feature within the chromosphere are spicule
Spicule (solar physics)
In solar physics, a spicule is a dynamic jet of about 500 km diameter in the chromosphere of the Sun. It moves upwards at about 20 km/s from the photosphere...
s, long thin fingers of luminous gas which appear like the blades of a huge field of fiery grass
Poaceae
The Poaceae is a large and nearly ubiquitous family of flowering plants. Members of this family are commonly called grasses, although the term "grass" is also applied to plants that are not in the Poaceae lineage, including the rushes and sedges...
growing upwards from the photosphere below. Spicules rise to the top of the chromosphere and then sink back down again over the course of about 10 minutes.

Another feature found in the chromosphere are fibrils, horizontal wisps of gas similar in extent to spicules but with about twice the duration.

Finally, solar prominence
Solar prominence
A prominence is a large, bright feature extending outward from the Sun's surface, often in a loop shape. Prominences are anchored to the Sun's surface in the photosphere, and extend outwards into the Sun's corona...
s rise up through the chromosphere from the photosphere, sometimes reaching altitudes of 150,000 kilometers. These gigantic plumes of gas are the most spectacular of solar phenomena, aside from the less frequent solar flare
Solar flare
A solar flare is a sudden brightening observed over the Sun surface or the solar limb, which is interpreted as a large energy release of up to 6 × 1025 joules of energy . The flare ejects clouds of electrons, ions, and atoms through the corona into space. These clouds typically reach Earth a day...
s.

Above the chromosphere of some stars there is a so-called transition region, where the temperature increases rapidly to the hot corona
Corona
A corona is a type of plasma "atmosphere" of the Sun or other celestial body, extending millions of kilometers into space, most easily seen during a total solar eclipse, but also observable in a coronagraph...
, which forms the outermost part of the atmosphere.

See the flash spectrum of the solar chromosphere (Eclipse of March 7, 1970).