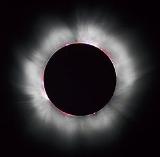 Overview
A coronal mass ejection (CME) is a massive burst of solar wind
Solar wind
The solar wind is a stream of charged particles ejected from the upper atmosphere of the Sun. It mostly consists of electrons and protons with energies usually between 1.5 and 10 keV. The stream of particles varies in temperature and speed over time...
, other light isotope plasma, and magnetic fields rising above the solar
Sun
The Sun is the star at the center of the Solar System. It is almost perfectly spherical and consists of hot plasma interwoven with magnetic fields...
corona
Corona
A corona is a type of plasma "atmosphere" of the Sun or other celestial body, extending millions of kilometers into space, most easily seen during a total solar eclipse, but also observable in a coronagraph...
or being released into space.

Coronal mass ejections are often associated with other forms of solar activity, most notably solar flares, but a causal relationship has not been established. Most ejections originate from active regions on Sun's surface, such as groupings of sunspot
Sunspot
Sunspots are temporary phenomena on the photosphere of the Sun that appear visibly as dark spots compared to surrounding regions. They are caused by intense magnetic activity, which inhibits convection by an effect comparable to the eddy current brake, forming areas of reduced surface temperature....
s associated with frequent flares.

I believe that CMEs can cause severe damage to overhead power transmission lines and pylons. Are powerlines that are buried underground affected to th...
More
x