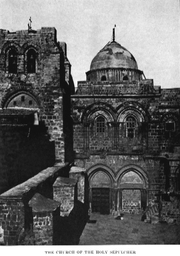 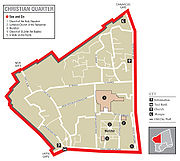 
Properties of the quarter

Christian buildings stand on much of the quarter. Besides the Church of the Holy Sepulchre, which occupies most of the land, the Patriarchate
Patriarchate
A patriarchate is the office or jurisdiction of a patriarch. A patriarch, as the term is used here, is either* one of the highest-ranking bishops in Eastern Orthodoxy, earlier, the five that were included in the Pentarchy: Rome, Constantinople, Alexandria, Antioch, and Jerusalem, but now nine,...
of the Greek Orthodox, the Franciscan
Franciscan
Most Franciscans are members of Roman Catholic religious orders founded by Saint Francis of Assisi. Besides Roman Catholic communities, there are also Old Catholic, Anglican, Lutheran, ecumenical and Non-denominational Franciscan communities....
monastery, San Salvatore and the Latin Patriarchate
Latin Patriarch of Jerusalem
The Latin Patriarch of Jerusalem is the title possessed by the Latin Rite Catholic Archbishop of Jerusalem. The Archdiocese of Jerusalem has jurisdiction for all Latin Rite Catholics in Israel, the Palestinian Territories, Jordan and Cyprus...
take up large areas as well.

The quarter also contains souvenir shops, coffee houses, restaurants and hotels. The shops are mostly concentrated in the market street, David Street, and along the Christian Road. Some of the hotels (such as the Casa Nova hotel and the Greek Catholic hotel) were built by the churches as places for visitors to stay. Others are private hotels.

The quarter also contains some small museums (such as the museum of the Greek Orthodox Patriarchate). In the southwest part of the quarter there is a pool called Hezkiyahu's Pool that was used to store rain water for the area.


Improvements of the quarter

In the 19th century, Europe
Europe
Europe is, by convention, one of the world's seven continents. Comprising the westernmost peninsula of Eurasia, Europe is generally 'divided' from Asia to its east by the watershed divides of the Ural and Caucasus Mountains, the Ural River, the Caspian and Black Seas, and the waterways connecting...
an countries aimed to expand their influence in Jerusalem and so began constructing several structures in the Christian quarter. The Ottoman
Ottoman Empire
The Ottoman EmpireIt was usually referred to as the "Ottoman Empire", the "Turkish Empire", the "Ottoman Caliphate" or more commonly "Turkey" by its contemporaries...
authorities attempted to halt European influence and established rules for buying land in the area. But personal interventions from the heads of those countries (such as Wilhelm II
William II, German Emperor
Wilhelm II was the last German Emperor and King of Prussia, ruling the German Empire and the Kingdom of Prussia from 15 June 1888 to 9 November 1918. He was a grandson of the British Queen Victoria and related to many monarchs and princes of Europe...
of Germany
Germany
Germany , officially the Federal Republic of Germany , is a federal parliamentary republic in Europe. The country consists of 16 states while the capital and largest city is Berlin. Germany covers an area of 357,021 km2 and has a largely temperate seasonal climate...
and Franz Joseph
Franz Joseph I of Austria
Franz Joseph I or Francis Joseph I was Emperor of Austria, King of Bohemia, King of Croatia, Apostolic King of Hungary, King of Galicia and Lodomeria and Grand Duke of Cracow from 1848 until his death in 1916.In the December of 1848, Emperor Ferdinand I of Austria abdicated the throne as part of...
of Austria
Austria
Austria , officially the Republic of Austria , is a landlocked country of roughly 8.4 million people in Central Europe. It is bordered by the Czech Republic and Germany to the north, Slovakia and Hungary to the east, Slovenia and Italy to the south, and Switzerland and Liechtenstein to the...
) led to construction of some buildings for those countries' religious authorities.

At the end of the 19th century, there were no further free lands for development in the Christian Quarter. In the same period, the Suez Canal
Suez Canal
The Suez Canal , also known by the nickname "The Highway to India", is an artificial sea-level waterway in Egypt, connecting the Mediterranean Sea and the Red Sea. Opened in November 1869 after 10 years of construction work, it allows water transportation between Europe and Asia without navigation...
had just opened and many Christians traveled to the Holy Land. This led to intensified competition between the European powers for presentation and influence in Jerusalem. France
France
The French Republic , The French Republic , The French Republic , (commonly known as France , is a unitary semi-presidential republic in Western Europe with several overseas territories and islands located on other continents and in the Indian, Pacific, and Atlantic oceans. Metropolitan France...
built hospital
Hospital
A hospital is a health care institution providing patient treatment by specialized staff and equipment. Hospitals often, but not always, provide for inpatient care or longer-term patient stays....
s, a monastery
Monastery
Monastery denotes the building, or complex of buildings, that houses a room reserved for prayer as well as the domestic quarters and workplace of monastics, whether monks or nuns, and whether living in community or alone .Monasteries may vary greatly in size – a small dwelling accommodating only...
, and hostels for visitors outside the Old City adjacent to the Christian quarter - an area which became known as the French area. Even before them, the Russians located themselves in the nearby Russian Compound.

There was a natural desire for easy travel between the Christian Quarter and the new development, but at the time the Old City walls formed a barrier and travelers were forced to take an indirect path through either Jaffa Gate or Nablus Gate. In 1898, the Ottomans accepted the request of the European countries and breached a new gate in the Old City walls, in the area of the new development. The gate was called "The New Gate
New Gate
The New Gate is the newest gate in the walls that surround the Old City of Jerusalem. It was built in 1889 to provide direct access between the Christian Quarter and the new neighborhoods then going up outside the walls. The arched gate is decorated with crenelated stonework...
".