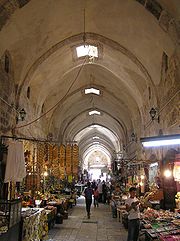 The Muslim Quarter is one of the four quarters of the ancient, walled Old City of Jerusalem. It covers 31 hectare
Hectare
The hectare is a metric unit of area defined as 10,000 square metres , and primarily used in the measurement of land. In 1795, when the metric system was introduced, the are was defined as being 100 square metres and the hectare was thus 100 ares or 1/100 km2...
s (76 acre
Acre
The acre is a unit of area in a number of different systems, including the imperial and U.S. customary systems. The most commonly used acres today are the international acre and, in the United States, the survey acre. The most common use of the acre is to measure tracts of land.The acre is related...
s) of the northeastern sector of the Old City. The quarter is the largest and most populous and extends from the Lions' Gate in the east, along the northern wall of the Temple Mount in the south, to the Damascus Gate
Damascus Gate
Damascus Gate is the main entrance to the Old City of Jerusalem. It is located in the wall on the city's northwest side where the highway leads out to Nablus, and from there, in times past, to the capital of Syria, Damascus; as such, its modern English name is Damascus Gate, and its modern Hebrew...
—Western Wall
Western Wall
The Western Wall, Wailing Wall or Kotel is located in the Old City of Jerusalem at the foot of the western side of the Temple Mount...
route in the west. The Via Dolorosa
Via Dolorosa
The Via Dolorosa is a street, in two parts, within the Old City of Jerusalem, held to be the path that Jesus walked, carrying his cross, on the way to his crucifixion. The current route has been established since the 18th century, replacing various earlier versions...
starts in the quarter. 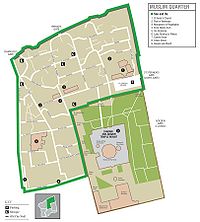 The population of the Muslim Quarter is 22,000.

The Muslim quarter had a mixed population of Jews, Muslims and Christians until the 1929 Palestine riots
1929 Palestine riots
The 1929 Palestine riots, also known as the Western Wall Uprising, the 1929 Massacres, , or the Buraq Uprising , refers to a series of demonstrations and riots in late August 1929 when a long-running dispute between Muslims and Jews over access to the Western Wall in Jerusalem escalated into violence...
. Some 60 Jewish families now live in the Muslim Quarter. Yeshivat Ateret Cohanim
Ateret Cohanim
Ateret Cohanim, , also known as Ateret Yerushalyim, is a Religious Zionist yeshiva located in the Muslim Quarter of the Old City of Jerusalem in Israel. Founded in 1978, it uses the building of the historic Torath Chaim Yeshiva...
is the largest yeshiva
Yeshiva
Yeshiva is a Jewish educational institution that focuses on the study of traditional religious texts, primarily the Talmud and Torah study. Study is usually done through daily shiurim and in study pairs called chavrutas...
.

In 2007, the Israeli government started funding the construction of The Flowers Gate development plan, the first Jewish settlement inside the Muslim Quarter since 1967. It would include 20 apartments and a synagogue.