Overview
Trinity College, Dublin formally known as the College of the Holy and Undivided Trinity of Queen Elizabeth near Dublin, was founded in 1592 by letters patent
Letters patent
Letters patent are a type of legal instrument in the form of a published written order issued by a monarch or president, generally granting an office, right, monopoly, title, or status to a person or corporation...
from Queen Elizabeth I
Elizabeth I of England
Elizabeth I was queen regnant of England and Ireland from 17 November 1558 until her death. Sometimes called The Virgin Queen, Gloriana, or Good Queen Bess, Elizabeth was the fifth and last monarch of the Tudor dynasty...
as the "mother of a university",

I am completing a paper in gravity waves and need help in finding a referenced author. He published a brilliant Note in the Cambridge and Dublin Mathe...
More

Originally established outside the city walls of Dublin in the buildings of the dissolved Augustinian Priory of All Hallows, Trinity was set up in part to consolidate the rule of the Tudor
Tudor dynasty
The Tudor dynasty or House of Tudor was a European royal house of Welsh origin that ruled the Kingdom of England and its realms, including the Lordship of Ireland, later the Kingdom of Ireland, from 1485 until 1603. Its first monarch was Henry Tudor, a descendant through his mother of a legitimised...
monarchy
Monarchy of the United Kingdom
The monarchy of the United Kingdom is the constitutional monarchy of the United Kingdom and its overseas territories. The present monarch, Queen Elizabeth II, has reigned since 6 February 1952. She and her immediate family undertake various official, ceremonial and representational duties...
in Ireland
Ireland
Ireland is an island to the northwest of continental Europe. It is the third-largest island in Europe and the twentieth-largest island on Earth...
, and it was seen as the university of the Protestant Ascendancy
Protestant Ascendancy
The Protestant Ascendancy, usually known in Ireland simply as the Ascendancy, is a phrase used when referring to the political, economic, and social domination of Ireland by a minority of great landowners, Protestant clergy, and professionals, all members of the Established Church during the 17th...
for much of its history; although Roman Catholics and Dissenters had been permitted to enter as early as 1793, certain restrictions on their membership of the college remained until 1873 (professorships, fellowships and scholarships were reserved for Protestants), and the Catholic Church in Ireland forbade its adherents, without permission from their bishop, from attending until 1970. Women were first admitted to the college as full members in 1904.

Trinity is now surrounded by Dublin and is located on College Green
College Green
College Green is a three-sided "square" in the centre of Dublin. On its northern side is a building known today as the Bank of Ireland which until 1800 was Ireland's Parliament House. To its east stands Trinity College Dublin, the only constituent college of the University of Dublin. To its south...
, opposite the former Irish Houses of Parliament
Irish Houses of Parliament
The Irish Houses of Parliament , also known as the Irish Parliament House, today called the Bank of Ireland, College Green due to its use as by the bank, was the world's first purpose-built two-chamber parliament house...
. The college proper occupies 190,000 m2 (47 acre
Acre
The acre is a unit of area in a number of different systems, including the imperial and U.S. customary systems. The most commonly used acres today are the international acre and, in the United States, the survey acre. The most common use of the acre is to measure tracts of land.The acre is related...
s), with many of its buildings ranged around large quadrangle
Quadrangle (architecture)
In architecture, a quadrangle is a space or courtyard, usually rectangular in plan, the sides of which are entirely or mainly occupied by parts of a large building. The word is probably most closely associated with college or university campus architecture, but quadrangles may be found in other...
s (known as 'squares') and two playing fields.

Academically, Trinity is divided into three faculties comprising 24 schools, offering degree
Academic degree
An academic degree is a position and title within a college or university that is usually awarded in recognition of the recipient having either satisfactorily completed a prescribed course of study or having conducted a scholarly endeavour deemed worthy of his or her admission to the degree...
and diploma
Diploma
A diploma is a certificate or deed issued by an educational institution, such as a university, that testifies that the recipient has successfully completed a particular course of study or confers an academic degree. In countries such as the United Kingdom and Australia, the word diploma refers to...
courses at both undergraduate and postgraduate levels. In 2011, it was ranked by the Times Higher Education World University Rankings
Times Higher Education World University Rankings
The Times Higher Education World University Rankings is an international ranking of universities published by the British magazine Times Higher Education in partnership with Thomson Reuters, which provided citation database information...
as the 117th best university in the world, by the QS World University Rankings
QS World University Rankings
The QS World University Rankings is a ranking of the world’s top 500 universities by Quacquarelli Symonds using a method that has published annually since 2004....
as the 65th best, by the Academic Ranking of World Universities
Academic Ranking of World Universities
The Academic Ranking of World Universities , commonly known as the Shanghai ranking, is a publication that was founded and compiled by the Shanghai Jiaotong University to rank universities globally. The rankings have been conducted since 2003 and updated annually...
as within the 201-300 bracket, and by all three as the best university in Ireland. The Library of Trinity College
Trinity College Library, Dublin
Trinity College Library Dublin, the centrally-administered library of Trinity College, Dublin, is the largest library in Ireland. As a "copyright library", it has legal deposit rights for material published in the Republic of Ireland; it is also the only Irish library to hold such rights for the...
is a legal deposit
Legal deposit
Legal deposit is a legal requirement that a person or group submit copies of their publications to a repository, usually a library. The requirement is mostly limited to books and periodicals. The number of copies varies and can range from one to 19 . Typically, the national library is one of the...
library for Ireland and the United Kingdom
United Kingdom
The United Kingdom of Great Britain and Northern IrelandIn the United Kingdom and Dependencies, other languages have been officially recognised as legitimate autochthonous languages under the European Charter for Regional or Minority Languages...
, containing over 4.5 million printed volumes and significant quantities of manuscripts (including the Book of Kells
Book of Kells
The Book of Kells is an illuminated manuscript Gospel book in Latin, containing the four Gospels of the New Testament together with various prefatory texts and tables. It was created by Celtic monks ca. 800 or slightly earlier...
), maps and music. 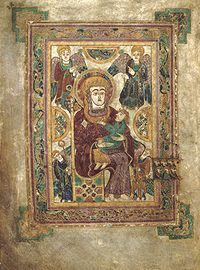 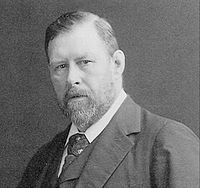 The first university of Dublin (unrelated to the current university) was created by the Pope in 1311, and had a Chancellor, lecturers and students (granted protection by the Crown) over many years, before coming to an end at the Reformation
English Reformation
The English Reformation was the series of events in 16th-century England by which the Church of England broke away from the authority of the Pope and the Roman Catholic Church....
.

Following this, and some debate about a new university at St. Patrick's Cathedral
St. Patrick's Cathedral, Dublin
Saint Patrick's Cathedral , or more formally, the Cathedral of the Blessed Virgin Mary and St Patrick is a cathedral of the Church of Ireland in Dublin, Ireland which was founded in 1191. The Church has designated it as The National Cathedral of Ireland...
, in 1592 a small group of Dublin citizens obtained a charter by way of letters patent
Letters patent
Letters patent are a type of legal instrument in the form of a published written order issued by a monarch or president, generally granting an office, right, monopoly, title, or status to a person or corporation...
from Queen Elizabeth
Elizabeth I of England
Elizabeth I was queen regnant of England and Ireland from 17 November 1558 until her death. Sometimes called The Virgin Queen, Gloriana, or Good Queen Bess, Elizabeth was the fifth and last monarch of the Tudor dynasty...