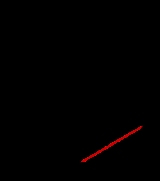 The area that a circular chord "cuts off" is called a circular segment
Circular segment
In geometry, a circular segment is an area of a circle informally defined as an area which is "cut off" from the rest of the circle by a secant or a chord. The circle segment constitutes the part between the secant and an arc, excluding the circle's center...
.
The midpoints of a set of parallel chords of an ellipse are collinear
Collinearity
A set of points is collinear if they lie on a single line. Related concepts include:In mathematics:...
.
Chords were used extensively in the early development of trigonometry
Trigonometry
Trigonometry is a branch of mathematics that studies triangles and the relationships between their sides and the angles between these sides. Trigonometry defines the trigonometric functions, which describe those relationships and have applicability to cyclical phenomena, such as waves...
.

The line joining midloints of two chords of a circle passes through its centre.Prove that the chords are parallel
More
x