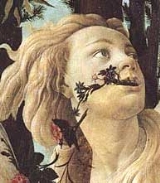 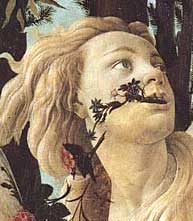 There are many stories in Greek mythology
Greek mythology
Greek mythology is the body of myths and legends belonging to the ancient Greeks, concerning their gods and heroes, the nature of the world, and the origins and significance of their own cult and ritual practices. They were a part of religion in ancient Greece...
about figures named Chloris ("Khloris" or Χλωρίς, from "Khloros" or χλωρός, meaning "greenish-yellow," "pale green," "pale," "pallid" or "fresh"). Some clearly refer to different characters; other stories may refer to the same Chloris, but disagree on details.

Chloris was a Nymph
Nymph
A nymph in Greek mythology is a female minor nature deity typically associated with a particular location or landform. Different from gods, nymphs are generally regarded as divine spirits who animate nature, and are usually depicted as beautiful, young nubile maidens who love to dance and sing;...
associated with spring, flowers and new growth. Her Roman
Roman mythology
Roman mythology is the body of traditional stories pertaining to ancient Rome's legendary origins and religious system, as represented in the literature and visual arts of the Romans...
equivalent was the goddess Flora. She was abducted by (and later married) Zephyr
Zephyr
Zephyr may refer to:* A light or west wind* Zephyrus, one of the Anemoi and the Greek god of the west wind* Zephyranthes, a plant genus whose species include the zephyr lily* Zephyr , a well-known graffiti artist from New York City...
, the god of the west wind.

Meliboea
Meliboea
In Greek mythology, Meliboea was a name attributed to the following individuals:*The wife of Magnes, who named the town of Meliboea in Thessaly after her. The town of Meliboea became a kingdom in eastern Thessalia . Nowadays, Meliboea is a municipality of Larissa prefecture...
was one of Niobe
Niobe
Niobe was a daughter of Tantalus and of either Dione, the most frequently cited, or of Eurythemista or Euryanassa, and she was the sister of Pelops and Broteas, all of whom figure in Greek mythology....
and Amphion
Amphion
There are several characters named Amphion in Greek mythology:* Amphion, son of Zeus and Antiope, and twin brother of Zethus . Together they are famous for building Thebes. Amphion married Niobe, and killed himself after the loss of his wife and children at the hands of Apollo and Artemis...
's fourteen children (the Niobids
Niobids
In Greek mythology, the Niobids were the children of Amphion of Thebes and Niobe, slain by Apollo and Artemis because Niobe, born of the royal house of Phrygia, had boastfully compared the greater number of her own offspring with those of Leto, Apollo's and Artemis' mother: a classic example of...
), and the only one (or one of two) spared when Artemis
Artemis
Artemis was one of the most widely venerated of the Ancient Greek deities. Her Roman equivalent is Diana. Some scholars believe that the name and indeed the goddess herself was originally pre-Greek. Homer refers to her as Artemis Agrotera, Potnia Theron: "Artemis of the wildland, Mistress of Animals"...
and Apollo
Apollo
Apollo is one of the most important and complex of the Olympian deities in Greek and Roman mythology...
killed the Niobids in retribution for Niobe's insult to their mother Leto
Leto
In Greek mythology, Leto is a daughter of the Titans Coeus and Phoebe. The island of Kos is claimed as her birthplace. In the Olympian scheme, Zeus is the father of her twins, Apollo and Artemis, the Letoides, which Leto conceived after her hidden beauty accidentally caught the eyes of Zeus...
, bragging that she had many children and Leto had only two. Meliboea was so frightened by the ordeal, she turned permanently pale, changing her name to Chloris ("pale one"). This Chloris is referred to in Homer
Homer
In the Western classical tradition Homer , is the author of the Iliad and the Odyssey, and is revered as the greatest ancient Greek epic poet. These epics lie at the beginning of the Western canon of literature, and have had an enormous influence on the history of literature.When he lived is...
's Odyssey
Odyssey
The Odyssey is one of two major ancient Greek epic poems attributed to Homer. It is, in part, a sequel to the Iliad, the other work ascribed to Homer. The poem is fundamental to the modern Western canon, and is the second—the Iliad being the first—extant work of Western literature...
(book 11, lines 281-296).

She was later to marry Neleus
Neleus
Neleus was the son of Poseidon and Tyro and brother of Pelias. Tyro was married to Cretheus but loved Enipeus, a river god. She pursued Enipeus, who refused her advances. One day, Poseidon, filled with lust for Tyro, disguised himself as Enipeus and from their union was born Pelias and Neleus,...
and become queen in Pylos
Pylos
Pylos , historically known under its Italian name Navarino, is a town and a former municipality in Messenia, Peloponnese, Greece. Since the 2011 local government reform it is part of the municipality Pylos-Nestoras, of which it is the seat and a municipal unit. It was the capital of the former...
. They had several sons including Nestor
Nestor (mythology)
In Greek mythology, Nestor of Gerenia was the son of Neleus and Chloris and the King of Pylos. He became king after Heracles killed Neleus and all of Nestor's siblings...
, Alastor
Alastor
Alastor can refer to a number of people and concepts related to Greek mythology:...
and Chromius
Chromius
In Greek mythology Chromius is the name of:# Chromius, son of king Priam# Chromius, son of Neleus and Chloris# Chromius, son of Pterelaus# Chromius, a defender of Troy killed by Teucer...
and a daughter Pero
Pero
In Greek mythology, Pero was a daughter of Neleus and Chloris, and the wife of her cousin Bias. Her sons included Areius, Leodocus, and Talaus. The story of Pero is mentioned in Book XI of Homer's Odyssey. Pero's beauty attracted many suitors, but Neleus, her father, refused to give his daughter...
. Chloris also had a son, Periclymenus
Periclymenus
In Greek mythology, the name Periclymenus may refer to:*A son of Neleus and Chloris. He was one of the Argonauts. Poseidon gave him the ability to shapeshift into various animals. He was killed by Heracles at Pylos, although he tried to escape in the form of an eagle. His offspring were Erginus...
while married to Neleus, though by some accounts Periclymenus's father was Poseidon
Poseidon
Poseidon was the god of the sea, and, as "Earth-Shaker," of the earthquakes in Greek mythology. The name of the sea-god Nethuns in Etruscan was adopted in Latin for Neptune in Roman mythology: both were sea gods analogous to Poseidon...
(who was himself Neleus's father). Poseidon gave Periclymenus the ability to transform into any animal. Other children include Taurus
Bull (mythology)
The worship of the Sacred Bull throughout the ancient world is most familiar to the Western world in the biblical episode of the idol of the Golden Calf. The Golden Calf after being made by the Hebrew people in the wilderness of Sinai, were rejected and destroyed by Moses and his tribe after his...
, Asterius
Asterius
The name "Asterius" may refer to:* Asterion, name of two sacred kings of Crete* Asterius of Ostia , Christian martyr and saint* Asterius of Caesarea , Christian martyr and saint* Asterius, Claudius and Neon , Christian martyr and saint...
, Pylaon, Deimachus, Eurybius, Phrasius, Eurymenes, Evagoras
Evagoras
Evagoras was the king of Salamis in Cyprus. The son of Nicocles, a previous king of Salamis, he claimed descent from Teucer, the son of Telamon and half-brother of Ajax, and his family had long been rulers of Salamis, although during his childhood Salamis came under Phoenician control, which...
and Epilaus.

Odysseus
Odysseus
Odysseus or Ulysses was a legendary Greek king of Ithaca and the hero of Homer's epic poem the Odyssey. Odysseus also plays a key role in Homer's Iliad and other works in the Epic Cycle....
is said to have encountered Chloris on his journey to Hades
Hades
Hades , Hadēs, originally , Haidēs or , Aidēs , meaning "the unseen") was the ancient Greek god of the underworld. The genitive , Haidou, was an elision to denote locality: "[the house/dominion] of Hades". Eventually, the nominative came to designate the abode of the dead.In Greek mythology, Hades...
(Homer
Homer
In the Western classical tradition Homer , is the author of the Iliad and the Odyssey, and is revered as the greatest ancient Greek epic poet. These epics lie at the beginning of the Western canon of literature, and have had an enormous influence on the history of literature.When he lived is...
's Odyssey
Odyssey
The Odyssey is one of two major ancient Greek epic poems attributed to Homer. It is, in part, a sequel to the Iliad, the other work ascribed to Homer. The poem is fundamental to the modern Western canon, and is the second—the Iliad being the first—extant work of Western literature...
, 11, 281).

Chloris married the seer Ampyx
Ampyx
Ampyx has several meanings; in hair care, an ampyx is a headband, often made of metal. In Greek mythology, there were a number of figures with the name Ampyx, Amycus or Ampycus ....
(son of Elatus
Elatus
There were eight figures named Elatus or Élatos in Greek mythology.* Elatus, a Lapith chieftain, was the father, by Hippeia, of:**Ischys who was beloved by Coronis...
), with whom she had a child Mopsus
Mopsus
Mopsus or Mopsos was the name of two famous seers in Greek mythology. A historical/legendary Mopsus was the founder of a house in power at widespread sites in the coastal plains of Pamphylia and Cilicia during the early Iron Age.-Son of Manto and Rhacius or Apollo:Mopsus, a celebrated seer and...
who also became a renowned seer and would later join the Argonaut
Argonaut
Argonaut may refer to:* Argonaut , a kind of octopus in the genus Argonauta* Jason and the Argonauts, sailors in Greek mythology* Argonauts of Saint Nicholas, a military order in Naples...
s.
The source of this article is wikipedia, the free encyclopedia.  The text of this article is licensed under the GFDL.