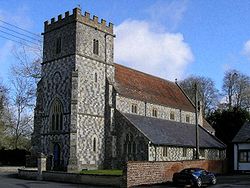 Chitterne is a village and parish
Parish
A parish is a territorial unit historically under the pastoral care and clerical jurisdiction of one parish priest, who might be assisted in his pastoral duties by a curate or curates - also priests but not the parish priest - from a more or less central parish church with its associated organization...
in the County of Wiltshire
Wiltshire
Wiltshire is a ceremonial county in South West England. It is landlocked and borders the counties of Dorset, Somerset, Hampshire, Gloucestershire, Oxfordshire and Berkshire. It contains the unitary authority of Swindon and covers...
, in the south west of England
England
England is a country that is part of the United Kingdom. It shares land borders with Scotland to the north and Wales to the west; the Irish Sea is to the north west, the Celtic Sea to the south west, with the North Sea to the east and the English Channel to the south separating it from continental...
. The village lies in the middle of Salisbury Plain
Salisbury Plain
Salisbury Plain is a chalk plateau in central southern England covering . It is part of the Southern England Chalk Formation and largely lies within the county of Wiltshire, with a little in Hampshire. The plain is famous for its rich archaeology, including Stonehenge, one of England's best known...
, to the south of the abandoned village of Imber
Imber
Imber is an uninhabited village in part of the British Army's training grounds on the Salisbury Plain, Wiltshire, England. It is situated in an isolated area of the Plain, about west of the A360 road between Tilshead and West Lavington, accessible only by military tracks...
. Its closest major settlements are Warminster
Warminster
Warminster is a town in western Wiltshire, England, by-passed by the A36, and near Frome and Westbury. It has a population of about 17,000. The River Were runs through the town and can be seen running through the middle of the town park. The Minster Church of St Denys sits on the River Were...
and the city of Salisbury.

Near the centre of the village is the Church of England parish church
Church of England parish church
A parish church in the Church of England is the church which acts as the religious centre for the people within the smallest and most basic Church of England administrative region, known as a parish.-Parishes in England:...
of All Saints
All Saints
All Saints' Day , often shortened to All Saints, is a solemnity celebrated on 1 November by parts of Western Christianity, and on the first Sunday after Pentecost in Eastern Christianity, in honour of all the saints, known and unknown...
with St Mary
Mary (mother of Jesus)
Mary , commonly referred to as "Saint Mary", "Mother Mary", the "Virgin Mary", the "Blessed Virgin Mary", or "Mary, Mother of God", was a Jewish woman of Nazareth in Galilee...
, built in 1863 to designs by T.H. Wyatt
Thomas Henry Wyatt
Thomas Henry Wyatt was an Irish British architect. He had a prolific and distinguished career, being elected President of the Royal Institute of British Architects 1870-73 and awarded their Royal Gold Medal for Architecture in 1873...
. There is also a village hall
Village hall
In the United States, a village hall is the seat of government for villages. It functions much as a city hall does within cities.In the United Kingdom, a village hall is usually a building within a village which contains at least one large room, usually owned by and run for the benefit of the local...
, which stands on the site of the former village school. A small Church of England chapel of ease
Chapel of ease
A chapel of ease is a church building other than the parish church, built within the bounds of a parish for the attendance of those who cannot reach the parish church conveniently....
next to the manor house
Manor house
A manor house is a country house that historically formed the administrative centre of a manor, the lowest unit of territorial organisation in the feudal system in Europe. The term is applied to country houses that belonged to the gentry and other grand stately homes...
is the last remaining part of the mediaeval parish church of St Mary, otherwise demolished in the 19th century. Opposite the village hall is a large sports field, on which cricket and football are played, according to the season. The village also has a public house
Public house
A public house, informally known as a pub, is a drinking establishment fundamental to the culture of Britain, Ireland, Australia and New Zealand. There are approximately 53,500 public houses in the United Kingdom. This number has been declining every year, so that nearly half of the smaller...
called The King's Head. There are several notable houses, including Chitterne House, The Manor and The Grange, all grade 2 listed for their architectural merit.

The civil parish of Chitterne also includes an uninhabited 'German Village' or FIBUA, used by the British Army
British Army
The British Army is the land warfare branch of Her Majesty's Armed Forces in the United Kingdom. It came into being with the unification of the Kingdom of England and Scotland into the Kingdom of Great Britain in 1707. The new British Army incorporated Regiments that had already existed in England...
for training in street warfare. This was built in the mid-1980s, before the Berlin Wall
Berlin Wall
The Berlin Wall was a barrier constructed by the German Democratic Republic starting on 13 August 1961, that completely cut off West Berlin from surrounding East Germany and from East Berlin...
was demolished, and is based on a typical village of Saxony
Saxony
The Free State of Saxony is a landlocked state of Germany, contingent with Brandenburg, Saxony Anhalt, Thuringia, Bavaria, the Czech Republic and Poland. It is the tenth-largest German state in area, with of Germany's sixteen states....
in Germany
Germany
Germany , officially the Federal Republic of Germany , is a federal parliamentary republic in Europe. The country consists of 16 states while the capital and largest city is Berlin. Germany covers an area of 357,021 km2 and has a largely temperate seasonal climate...
. It was more recently adapted for training troops going to Iraq
Iraq
Iraq ; officially the Republic of Iraq is a country in Western Asia spanning most of the northwestern end of the Zagros mountain range, the eastern part of the Syrian Desert and the northern part of the Arabian Desert....
. A few miles away, across Salisbury Plain
Salisbury Plain
Salisbury Plain is a chalk plateau in central southern England covering . It is part of the Southern England Chalk Formation and largely lies within the county of Wiltshire, with a little in Hampshire. The plain is famous for its rich archaeology, including Stonehenge, one of England's best known...
in the "Danger Area", lies the remains of the ancient village of Imber
Imber
Imber is an uninhabited village in part of the British Army's training grounds on the Salisbury Plain, Wiltshire, England. It is situated in an isolated area of the Plain, about west of the A360 road between Tilshead and West Lavington, accessible only by military tracks...
, also used for training purposes by the military.

Chitterne was previously two separate ecclesiastical parishes, called Chitterne All Saints and Chitterne St Mary. The principal local industries were weaving and agriculture, but the employment profile of the village is now very similar to Southern England generally. The present combined parish was established in the 20th century.

Chitterne was one of the many Wiltshire estates owned in the 12th century by Ela, 3rd Countess of Salisbury.

Most local government services are provided by Wiltshire Council
Wiltshire
Wiltshire is a ceremonial county in South West England. It is landlocked and borders the counties of Dorset, Somerset, Hampshire, Gloucestershire, Oxfordshire and Berkshire. It contains the unitary authority of Swindon and covers...
, which has its offices in Trowbridge
Trowbridge
Trowbridge is the county town of Wiltshire, England, situated on the River Biss in the west of the county, approximately 12 miles southeast of Bath, Somerset....
, 15 miles (24.1 km) to the north. Chitterne also has its own elected parish council of seven members, five representing the ancient parish of Chitterne All Saints and two representing the former Chitterne St Mary.

The village is represented in Parliament
Parliament of the United Kingdom
The Parliament of the United Kingdom of Great Britain and Northern Ireland is the supreme legislative body in the United Kingdom, British Crown dependencies and British overseas territories, located in London...
by the MP
Member of Parliament
A Member of Parliament is a representative of the voters to a :parliament. In many countries with bicameral parliaments, the term applies specifically to members of the lower house, as upper houses often have a different title, such as senate, and thus also have different titles for its members,...
for South West Wiltshire, Andrew Murrison
Andrew Murrison
Dr Andrew William Murrison is a doctor and Conservative Party politician in the United Kingdom. After serving as the Member of Parliament for Westbury from 2001 to 2010, at the 2010 general election he was elected for the new seat of South West Wiltshire.-Early life:The son of William Gordon...
.