Encyclopedia
Chipata, population 98,416, is the capital of the Eastern Province
Eastern Province, Zambia
Eastern Province is one of Zambia's nine provinces. The province lies between the Luangwa River and the border with Malawi, from Isoka in the northeast to just north of Luangwa in the south.The provincial capital is Chipata...
of Zambia
Zambia
Zambia , officially the Republic of Zambia, is a landlocked country in Southern Africa. The neighbouring countries are the Democratic Republic of the Congo to the north, Tanzania to the north-east, Malawi to the east, Mozambique, Zimbabwe, Botswana and Namibia to the south, and Angola to the west....
. The two languages spoken are Nyanja and English
English language
English is a West Germanic language that arose in the Anglo-Saxon kingdoms of England and spread into what was to become south-east Scotland under the influence of the Anglian medieval kingdom of Northumbria...
, though you might find some Indian languages, as there is a large number of Zambian Indians
Indians in Zambia
There is a small community of Indians in Zambia. Unlike the better-known Indian communities of East Africa, they were little-studied by historians until the 2000s.-Migration history:...
located in the town. Formerly known as Fort Jameson, the city is located near the border with Malawi
Malawi
The Republic of Malawi is a landlocked country in southeast Africa that was formerly known as Nyasaland. It is bordered by Zambia to the northwest, Tanzania to the northeast, and Mozambique on the east, south and west. The country is separated from Tanzania and Mozambique by Lake Malawi. Its size...
, along the road connecting the capitals Lilongwe
Lilongwe
Lilongwe, estimated population 902,388 as of 2009, is the capital and largest city of Malawi. It lies in the country's central region, on the Lilongwe River, near the border of Malawi, Mozambique, and Zambia, and on the main north-south highway of Malawi, the M1.-History:The city started life as a...
(130 km) and Lusaka
Lusaka
Lusaka is the capital and largest city of Zambia. It is located in the southern part of the central plateau, at an elevation of about 1,300 metres . It has a population of about 1.7 million . It is a commercial centre as well as the centre of government, and the four main highways of Zambia head...
(550 km). The city is a popular access point for the South Luangwa National Park
South Luangwa National Park
South Luangwa National Park in eastern Zambia, the southernmost of three national parks in the valley of the Luangwa River, is a world-renowned wildlife haven. It supports large populations of Thornicroft's Giraffe, and herds of elephant and buffalo often several hundred strong, while the Luangwa...
.

The city lies at the end of the Great East Road
Great East Road (Zambia)
The Great East Road is a major road in Zambia and the only highway linking its Eastern Province with the rest of the country. It is also the major link between Zambia and Malawi and between Zambia and northern Mozambique...
and near the border with Malawi
Malawi
The Republic of Malawi is a landlocked country in southeast Africa that was formerly known as Nyasaland. It is bordered by Zambia to the northwest, Tanzania to the northeast, and Mozambique on the east, south and west. The country is separated from Tanzania and Mozambique by Lake Malawi. Its size...
, The market town
Market town
Market town or market right is a legal term, originating in the medieval period, for a European settlement that has the right to host markets, distinguishing it from a village and city...
has a "welcome" arch
Arch
An arch is a structure that spans a space and supports a load. Arches appeared as early as the 2nd millennium BC in Mesopotamian brick architecture and their systematic use started with the Ancient Romans who were the first to apply the technique to a wide range of structures.-Technical aspects:The...
, a mosque
Mosque
A mosque is a place of worship for followers of Islam. The word is likely to have entered the English language through French , from Portuguese , from Spanish , and from Berber , ultimately originating in — . The Arabic word masjid literally means a place of prostration...
, a golf course
Golf course
A golf course comprises a series of holes, each consisting of a teeing ground, fairway, rough and other hazards, and a green with a flagstick and cup, all designed for the game of golf. A standard round of golf consists of playing 18 holes, thus most golf courses have this number of holes...
and an airstrip 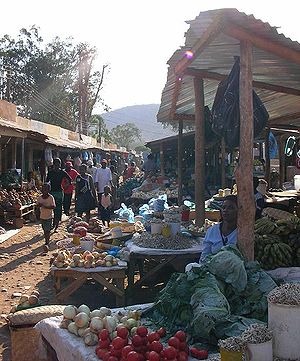 Chipata will act as the Zambian railhead and entry point for a rail link finally being completed from Mchinji
Mchinji
Mchinji is a town in the Mchinji District of the Central Region of Malawi. As of 2008 estimates, Mchinji has a population of 25,184. The area's economy is sustained by rain-fed agriculture, although the town is currently in the midst of a food crisis. Mchinji is also a major railroad junction,...
in Malawi
Malawi
The Republic of Malawi is a landlocked country in southeast Africa that was formerly known as Nyasaland. It is bordered by Zambia to the northwest, Tanzania to the northeast, and Mozambique on the east, south and west. The country is separated from Tanzania and Mozambique by Lake Malawi. Its size...
. In the pipeline since 1982, the short link (about 35 km) will provide a through-route for rail traffic from Zambia via Malawi to the Indian Ocean deepwater port at Nacala
Nacala
Nacala, also known as Cidade de Nacala or Nacala-Porto is on the northern coast of Mozambique is the deepest natural port on the east coast of Africa. It serves as the terminal for the Nacala Railway, a rail link to the landlocked Malawi...
in Mozambique
Mozambique
Mozambique, officially the Republic of Mozambique , is a country in southeastern Africa bordered by the Indian Ocean to the east, Tanzania to the north, Malawi and Zambia to the northwest, Zimbabwe to the west and Swaziland and South Africa to the southwest...
. The route and alignment of the line has been laid out, including the site of Chipata station and the basic station building. The route will provide an alternative to two existing rail routes to the Indian Ocean, at Dar es Salaam
Dar es Salaam
Dar es Salaam , formerly Mzizima, is the largest city in Tanzania. It is also the country's richest city and a regionally important economic centre. Dar es Salaam is actually an administrative province within Tanzania, and consists of three local government areas or administrative districts: ...
and Beira
Beira, Mozambique
Beira is the second largest city in Mozambique. It lies in the central region of the country in Sofala Province, where the Pungue River meets the Indian Ocean. Beira had a population of 412,588 in 1997, which grew to an estimated 546,000 in 2006...
.