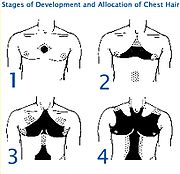 The term chest hair is generally used to describe hair
Hair
Hair is a filamentous biomaterial, that grows from follicles found in the dermis. Found exclusively in mammals, hair is one of the defining characteristics of the mammalian class....
that grows on the chest
Chest
The chest is a part of the anatomy of humans and various other animals. It is sometimes referred to as the thorax or the bosom.-Chest anatomy - Humans and other hominids:...
of human males, in the region between the neck
Neck
The neck is the part of the body, on many terrestrial or secondarily aquatic vertebrates, that distinguishes the head from the torso or trunk. The adjective signifying "of the neck" is cervical .-Boner anatomy: The cervical spine:The cervical portion of the human spine comprises seven boney...
and the abdomen. Chest hair, which is a secondary sex characteristic
Secondary sex characteristic
Secondary sex characteristics are features that distinguish the two sexes of a species, but that are not directly part of the reproductive system. They are believed to be the product of sexual selection for traits which give an individual an advantage over its rivals in courtship and aggressive...
, develops during and after puberty
Puberty
Puberty is the process of physical changes by which a child's body matures into an adult body capable of reproduction, as initiated by hormonal signals from the brain to the gonads; the ovaries in a girl, the testes in a boy...
. It is therefore part of the androgenic hair
Androgenic hair
Androgenic hair, colloquially body hair, is the terminal hair that develops on the body during and after puberty. It is differentiated from the head hair and less visible vellus hair, which are much finer and lighter in color. The growth of androgenic hair is related to the level of androgens in...
.

Although vellus hair is already present in the area in childhood, the term chest hair is generally restricted to the terminal hair
Terminal hair
Terminal hairs are thick, long, and dark, as compared with vellus hair. During puberty, the increase in androgenic hormone levels causes vellus hair to be replaced with terminal hair in certain parts of the human body...
that develops as an effect of rising levels of androgens (primarily testosterone
Testosterone
Testosterone is a steroid hormone from the androgen group and is found in mammals, reptiles, birds, and other vertebrates. In mammals, testosterone is primarily secreted in the testes of males and the ovaries of females, although small amounts are also secreted by the adrenal glands...
and its derivatives) due to puberty
Puberty
Puberty is the process of physical changes by which a child's body matures into an adult body capable of reproduction, as initiated by hormonal signals from the brain to the gonads; the ovaries in a girl, the testes in a boy...
. Different from the head hair it is therefore a secondary sexual characteristic. Men tend to be covered with far more terminal hair, particularly on the chest, the abdomen
Abdominal hair
The term abdominal hair refers to the hair that grows on the abdomen of humans and non-human mammals, in the region between the pubic area and the thorax . The growth of abdominal hair follows the same pattern on nearly all mammals, vertically from the pubic area upwards and from the thorax...
and the face
Facial hair
Facial hair is a secondary sex characteristic of human males. Men often start developing facial hair in the later years of puberty or adolescence, approximately between 17–20 years of age, and most do not finish developing a fully adult beard until their early 20s or even later...
.

The development of chest hair begins normally during late puberty, usually between the ages of 15 and 18. It can also start later, between the age of 20 and 30, so that many men in their twenties have not yet reached their full chest hair development. The growth continues subsequently. In older adult years androgens cause thickening of the hair. 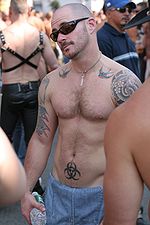 The direction of growth of hair can make for interesting patterns, akin to depictions of mathematical vector fields. Typical males will exhibit a node on the upper sternum, the hair above which points up and the hair below which points down. Some individuals (of, say, the pattern in diagram 3) have spirals on their upper pectoral regions (several inches from the nipple towards the neck) which run clockwise on the left breast and counter-clockwise on the right.

Considering an individual occurrence of chest hair as abnormal is usually not due to medical indications but primarily to cultural and social attitudes. An excessive growth of terminal hair on the body of men and women is called hypertrichosis
Hypertrichosis
Hypertrichosis is an abnormal amount of hair growth on the body; extensive cases of hypertrichosis have informally been called werewolf syndrome. There are two distinct types of hypertrichosis: generalized hypertrichosis, which occurs over the entire body, and localized hypertrichosis, which is...
. This medical term has to be distinguished from hirsutism
Hirsutism
Hirsutism or frazonism is the excessive hairiness on women in those parts of the body where terminal hair does not normally occur or is minimal - for example, a beard or chest hair. It refers to a male pattern of body hair and it is therefore primarily of cosmetic and psychological concern...
that just affects women. These women can develop terminal hair on the chest following the male pattern as a symptom of an endocrine disease.