Before puberty
Puberty
Puberty is the process of physical changes by which a child's body matures into an adult body capable of reproduction, as initiated by hormonal signals from the brain to the gonads; the ovaries in a girl, the testes in a boy...
, the abdominal region of both males and females is covered with very fine vellus hair. In response to rising levels of androgens (mainly testosterone
Testosterone
Testosterone is a steroid hormone from the androgen group and is found in mammals, reptiles, birds, and other vertebrates. In mammals, testosterone is primarily secreted in the testes of males and the ovaries of females, although small amounts are also secreted by the adrenal glands...
) during and after puberty, the skin of the abdomen begins to produce coarser, longer and more pigmented hair (terminal hair
Terminal hair
Terminal hairs are thick, long, and dark, as compared with vellus hair. During puberty, the increase in androgenic hormone levels causes vellus hair to be replaced with terminal hair in certain parts of the human body...
). This process affects primarily men. Initially hair grows in a vertical line from the pubic area up to the navel and from the thorax down to the navel. Slang terms for this line of hair include "snail trail", "happy line", "happy trail", or "treasure trail". Although the development of abdominal hair normally begins during puberty, it may also start later, between the ages of 20 and 30. With some men, the abdominal hair will stay within a clearly defined vertical line, but in others, terminal hair will appear laterally as well as vertically, particularly in the area around the navel. This lateral spreading can continue into middle age. The study noted below found that two in three young men have a (sagittal) "treasure trail" by the time they are seventeen, and nearly half have one by time they are fifteen.

Some women may develop a small line of hair from the pubic area up to the navel. According to the female sex image in some cultures this is seen as desirable, and in others it is seen as unattractive. Excessive abdominal hair on women, following the male pattern, is a type of hirsutism
Hirsutism
Hirsutism or frazonism is the excessive hairiness on women in those parts of the body where terminal hair does not normally occur or is minimal - for example, a beard or chest hair. It refers to a male pattern of body hair and it is therefore primarily of cosmetic and psychological concern...
. 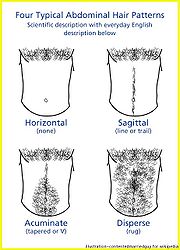 Various studies of Caucasian
Caucasian race
The term Caucasian race has been used to denote the general physical type of some or all of the populations of Europe, North Africa, the Horn of Africa, Western Asia , Central Asia and South Asia...
subjects have documented four general patterns of pubic and abdominal hair including:


Richard Zickler performed a 1997 study (see citation below) of the above patterns and their occurrence in males and females, paying particular attention to the development of hair during puberty. In Zickler's study the horizontal pattern was most common in females with an incidence of about 80 percent. This pattern occurred in 6% of males, including 55% of 13–15 year olds and 28% of 16 and 17 year olds. The sagittal pattern was found in 44% of males under 16, 67% of males aged 16–17, 20% of males over 17, and 17% of females. The acuminate pattern occurred in about 55 percent of males and occasionally in females. The disperse pattern occurred in about 19 percent of the males studied.

The following journal articles include sketches of different abdominal hair patterns and observed percentages of men exhibiting each pattern.