Encyclopedia
Chemical looping combustion (CLC) typically employs a dual fluidized bed
Fluidized bed
A fluidized bed is formed when a quantity of a solid particulate substance is placed under appropriate conditions to cause the solid/fluid mixture to behave as a fluid. This is usually achieved by the introduction of pressurized fluid through the particulate medium...
system (circulating fluidized bed process) where a metal oxide is employed as a bed material providing the oxygen for combustion in the fuel reactor
Fluidized bed combustion
Fluidized bed combustion is a combustion technology used in power plants. Fluidized beds suspend solid fuels on upward-blowing jets of air during the combustion process. The result is a turbulent mixing of gas and solids. The tumbling action, much like a bubbling fluid, provides more effective...
. The reduced metal is then transferred to the second bed (air reactor
Fluidized bed reactor
A fluidized bed reactor is a type of reactor device that can be used to carry out a variety of multiphase chemical reactions. In this type of reactor, a fluid is passed through a granular solid material at high enough velocities to suspend the solid and cause it to behave as though it were a fluid...
) and re-oxidized before being reintroduced back to the fuel reactor completing the loop.

Isolation of the fuel from air simplifies the number of chemical reaction
Chemical reaction
A chemical reaction is a process that leads to the transformation of one set of chemical substances to another. Chemical reactions can be either spontaneous, requiring no input of energy, or non-spontaneous, typically following the input of some type of energy, such as heat, light or electricity...
s in combustion
Combustion
Combustion or burning is the sequence of exothermic chemical reactions between a fuel and an oxidant accompanied by the production of heat and conversion of chemical species. The release of heat can result in the production of light in the form of either glowing or a flame...
. Employing oxygen
Oxygen
Oxygen is the element with atomic number 8 and represented by the symbol O. Its name derives from the Greek roots ὀξύς and -γενής , because at the time of naming, it was mistakenly thought that all acids required oxygen in their composition...
without nitrogen
Nitrogen
Nitrogen is a chemical element that has the symbol N, atomic number of 7 and atomic mass 14.00674 u. Elemental nitrogen is a colorless, odorless, tasteless, and mostly inert diatomic gas at standard conditions, constituting 78.08% by volume of Earth's atmosphere...
and the trace gases found in air eliminates the primary source for the formation of nitrogen oxide
Nitrogen oxide
Nitrogen oxide can refer to a binary compound of oxygen and nitrogen, or a mixture of such compounds:* Nitric oxide, also known as nitrogen monoxide, , nitrogen oxide* Nitrogen dioxide , nitrogen oxide...
, producing a flue gas
Flue gas
Flue gas is the gas exiting to the atmosphere via a flue, which is a pipe or channel for conveying exhaust gases from a fireplace, oven, furnace, boiler or steam generator. Quite often, the flue gas refers to the combustion exhaust gas produced at power plants...
composed primarily of carbon dioxide
Carbon dioxide
Carbon dioxide is a naturally occurring chemical compound composed of two oxygen atoms covalently bonded to a single carbon atom...
and water vapor
Water vapor
Water vapor or water vapour , also aqueous vapor, is the gas phase of water. It is one state of water within the hydrosphere. Water vapor can be produced from the evaporation or boiling of liquid water or from the sublimation of ice. Under typical atmospheric conditions, water vapor is continuously...
; other trace pollutants depend on the fuel
Fuel
Fuel is any material that stores energy that can later be extracted to perform mechanical work in a controlled manner. Most fuels used by humans undergo combustion, a redox reaction in which a combustible substance releases energy after it ignites and reacts with the oxygen in the air...
selected.

Chemical looping combustion (CLC) uses two or more reactions to perform the oxidation of hydrocarbon based fuels. In its simplest form, an oxygen carrying species (normally a metal) is first oxidised in air forming an oxide. This oxide is then reduced using a hydrocarbon as reducer in a second reaction. As an example, a nickel
Nickel
Nickel is a chemical element with the chemical symbol Ni and atomic number 28. It is a silvery-white lustrous metal with a slight golden tinge. Nickel belongs to the transition metals and is hard and ductile...
based system burning pure carbon would involve the two redox
Redox
Redox reactions describe all chemical reactions in which atoms have their oxidation state changed....
reactions:

If (1) and (2) are added together, the reaction set reduces to straight carbon oxidation – the nickel acting as a catalyst only i.e.: 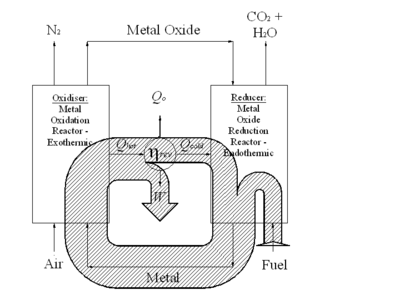 CLC dates from the early 1980s when it was proposed as a system for increasing power station efficiency . The gain in efficiency is possible due to the enhanced reversibility of the two redox reactions; in traditional single stage combustion, the release of a fuel’s energy occurs in a highly irreversible manner - departing considerably from equilibrium. In CLC, if an appropriate oxygen carrier is chosen, both redox reactions can be made to occur almost reversibly and at relatively low temperatures. Theoretically, this allows a power station using CLC to approach the ideal work output for an internal combustion engine without exposing components to excessive working temperatures.

Fig 1 illustrates the energy exchanges in a CLC system graphically, and shows a Sankey diagram
Sankey diagram
Sankey diagrams are a specific type of flow diagram, in which the width of the arrows is shown proportionally to the flow quantity. They are typically used to visualize energy or material or cost transfers between processes.-Application:...
of the energy fluxes occurring in a reversible CLC based engine. Studying Fig 1, a heat engine
Heat engine
In thermodynamics, a heat engine is a system that performs the conversion of heat or thermal energy to mechanical work. It does this by bringing a working substance from a high temperature state to a lower temperature state. A heat "source" generates thermal energy that brings the working substance...
is arranged to receive heat at high temperature from the exothermic
Exothermic
In thermodynamics, the term exothermic describes a process or reaction that releases energy from the system, usually in the form of heat, but also in the form of light , electricity , or sound...
oxidation reaction. After converting part of this energy to work, the heat engine rejects the remaining energy as heat. Almost all of this heat rejection can be absorbed by the endothermic
Endothermic
In thermodynamics, the word endothermic describes a process or reaction in which the system absorbs energy from the surroundings in the form of heat. Its etymology stems from the prefix endo- and the Greek word thermasi,...
reduction reaction occurring in the reducer. This arrangement requires the redox reactions to be exothermic and endothermic respectively, but this is normally the case for most metals . Some additional heat exchange with the environment is required to satisfy the second law
Second law
Second law may refer to:* the second of Newton's laws of motion* Second law of thermodynamics* Second Law, or in Greek Deuterosis, the talmudic Mishna, which comes after the Law of Moses...
; theoretically, for a reversible process, the heat exchange is related to the standard state entropy change, ΔSo, of the primary hydrocarbon oxidation reaction as follows:

However, for most hydrocarbons ΔSo, is a small value and, as a result, an engine of high overall efficiency is theoretically possible..

Although proposed as a means of increasing efficiency, in recent years, interest has been shown in CLC as a carbon capture technique. Carbon capture is facilitated by CLC because the two redox reactions generate two intrinsically separated flue gas streams: a stream from the oxidiser, consisting of atmospheric and residual , but sensibly free of ; and a stream from the reducer containing and with very little diluent nitrogen. The oxidiser exit gas can be discharged to the atmosphere causing minimal pollution. The reducer exit gas contains almost all of the generated by the system and CLC therefore can be said to exhibit 'inherent carbon capture', as water vapour can easily be removed from the second flue gas via condensation, leading to a stream of almost pure . This gives CLC clear benefits when compared with competing carbon capture technologies, as the latter generally involve a significant energy penalty associated with either post combustion scrubbing systems or the work input required for air separation plants. This has led to CLC being proposed as an energy efficient carbon capture technology .

In summary CLC can achieve both an increase in power station efficiency simultaneously with low energy penalty carbon capture. Challenges with CLC include operation of dual fluidized bed (maintaining carrier fluidization while avoiding crushing and attrition), and maintaining carrier stability over many cycles.