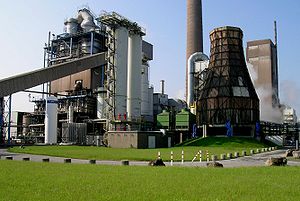 A fluidized bed is formed when a quantity of a solid
Solid
Solid is one of the three classical states of matter . It is characterized by structural rigidity and resistance to changes of shape or volume. Unlike a liquid, a solid object does not flow to take on the shape of its container, nor does it expand to fill the entire volume available to it like a...
particulate substance (usually present in a holding vessel) is placed under appropriate conditions to cause the solid/fluid mixture to behave as a fluid
Fluid
In physics, a fluid is a substance that continually deforms under an applied shear stress. Fluids are a subset of the phases of matter and include liquids, gases, plasmas and, to some extent, plastic solids....
. This is usually achieved by the introduction of pressurized fluid through the particulate medium. This results in the medium then having many properties and characteristics of normal fluids; such as the ability to free-flow under gravity, or to be pumped using fluid type technologies.

The resulting phenomenon is called fluidization
Fluidization
Fluidization is a process similar to liquefaction whereby a granular material is converted from a static solid-like state to a dynamic fluid-like state...
. Fluidized beds are used for several purposes, such as fluidized bed reactor
Fluidized bed reactor
A fluidized bed reactor is a type of reactor device that can be used to carry out a variety of multiphase chemical reactions. In this type of reactor, a fluid is passed through a granular solid material at high enough velocities to suspend the solid and cause it to behave as though it were a fluid...
s (types of chemical reactor
Chemical reactor
In chemical engineering, chemical reactors are vessels designed to contain chemical reactions. The design of a chemical reactor deals with multiple aspects of chemical engineering. Chemical engineers design reactors to maximize net present value for the given reaction...
s), fluid catalytic cracking
Fluid catalytic cracking
Fluid catalytic cracking is the most important conversion process used in petroleum refineries. It is widely used to convert the high-boiling, high-molecular weight hydrocarbon fractions of petroleum crude oils to more valuable gasoline, olefinic gases, and other products...
, fluidized bed combustion
Fluidized bed combustion
Fluidized bed combustion is a combustion technology used in power plants. Fluidized beds suspend solid fuels on upward-blowing jets of air during the combustion process. The result is a turbulent mixing of gas and solids. The tumbling action, much like a bubbling fluid, provides more effective...
, heat or mass transfer or interface modification, such as applying a coating
Coating
Coating is a covering that is applied to the surface of an object, usually referred to as the substrate. In many cases coatings are applied to improve surface properties of the substrate, such as appearance, adhesion, wetability, corrosion resistance, wear resistance, and scratch resistance...
onto solid items. This technique is also becoming more common in Aquaculture
Aquaculture
Aquaculture, also known as aquafarming, is the farming of aquatic organisms such as fish, crustaceans, molluscs and aquatic plants. Aquaculture involves cultivating freshwater and saltwater populations under controlled conditions, and can be contrasted with commercial fishing, which is the...
for the production of shellfish in Integrated Multi-Trophic Aquaculture systems.

A fluidized bed consists of fluid-solid mixture that exhibits fluid-like properties. As such, the upper surface of the bed is relatively horizontal, which is analogous to hydrostatic behavior. The bed can be considered to be an inhomogeneous mixture of fluid and solid that can be represented by a single bulk density.

Furthermore, an object with a higher density than the bed will sink, whereas an object with a lower density than the bed will float, thus the bed can be considered to exhibit the fluid behavior expected of Archimedes' principle
Archimedes' principle
Archimedes' principle relates buoyancy to displacement. It is named after its discoverer, Archimedes of Syracuse.-Principle:Archimedes' treatise On floating bodies, proposition 5, states that...
. As the "density", (actually the solid volume fraction of the suspension), of the bed can be altered by changing the fluid fraction, objects with different densities comparative to the bed can, by altering either the fluid or solid fraction, be caused to sink or float.

In fluidized beds, the contact of the solid particles with the fluidization medium (a gas or a liquid) is greatly enhanced when compared to packed beds. This behavior in fluidized combustion beds enables good thermal transport inside the system and good heat transfer between the bed and its container. Similarly to the good heat transfer, which enables thermal uniformity analogous to that of a well mixed gas, the bed can have a significant heat-capacity whilst maintaining a homogeneous temperature field.

Fluidized beds are used as a technical process which has the ability to promote high levels of contact between gases and solids. In a fluidized bed a characteristic set of basic properties can be utilised, indispensable to modern process
and chemical engineering, these properties include:

Taking an example from the food processing industry: fluidized beds are used to accelerate freezing in some IQF tunnel freezers. IQF means Individually Quick Frozen, or freezing unpackaged separate pieces. These fluidized bed tunnels are typically used on small food products like peas, shrimp or sliced vegetables, and may use cryogenic or vapor-compression refrigeration
Vapor-compression refrigeration
Vapor-compression refrigeration is one of the many refrigeration cycles available for use. It has been and is the most widely used method for air-conditioning of large public buildings, offices, private residences, hotels, hospitals, theaters, restaurants and automobiles...
. The fluid used in fluidized beds may also contain a fluid of catalytic type; that's why it is also used to catalyse the chemical reaction and also to improve the rate of reaction.

In 1922 von Winkler designed a reactor that for the first time utilized a coal gasification
Coal gasification
Coal gasification is the process of producing coal gas, a type of syngas–a mixture of carbon monoxide , hydrogen , carbon dioxide and water vapour –from coal...
process. Further application of the fluidized bed included the catalytic cracking of mineral oils in the 1940s. During this time theoretical and experimental research improved the design of the fluidized bed. In the 1960s VAW-Lippewerk in Lönen implemented
the first industrial bed for the combustion of coal and later for the calcination of aluminium hydroxide.

Bed types can be coarsely classified by their flow behavior, including:

When the packed bed has a fluid passed over it, the pressure drop of the fluid is approximately proportional to the fluid's superficial velocity
Superficial velocity
Superficial velocity , in engineering of multiphase flows and flows in porous media, is an hypothetical fluid velocity calculated as if the given phase or fluid were the only one flowing or present in a given cross sectional area. Other phases, particles, the skeleton of the porous medium, etc...
. In order to transition from a packed bed to a fluidized condition, the gas velocity is continually raised. For a free-standing bed there will exist a point, known as the minimum or incipient fluidisation point, whereby the bed's mass is suspended directly by the flow of the fluid stream. The corresponding fluid velocity, known as the "minimum
fluidization velocity",

Beyond the minimum fluidization velocity (

), the bed material will be suspended by the gas-stream and further increases in the velocity will have a reduced effect on the pressure, owing to sufficient percolation
Percolation
In physics, chemistry and materials science, percolation concerns the movement and filtering of fluids through porous materials...
of the gas flow. Thus the pressure drop from for

At the base of the vessel the apparent pressure drop multiplied by the cross-section area of the bed can be equated to the force of the weight of the solid particles (less the buoyancy of the solid in the fluid).

In 1973, Professor D. Geldart proposed the grouping of powders in to four so-called "Geldart Groups". The groups are defined by their locations on a diagram of solid-fluid density difference and particle size. Design methods for fluidized
beds can be tailored based upon the particle's Geldart grouping.

Group A For this group the particle size is between 20 and 100 um, and the particle density is typically less than 1.4g/cm3. Prior to the initiation of a bubbling bed phase, beds from these particles will expand by a factor of 2 to 3 at incipient fluidization, due to a decreased bulk density. Most powder-catalyzed beds utilize this group.

Group B The particle size lies between 40 and 500 um and the particle density between 1.4-4g/cm3. Bubbling typically forms directly at incipient fluidization.

Group C This group contains extremely fine and consequently the most cohesive particles. With a size of 20 to 30 um, these particles fluidize under very difficult to achieve conditions, and may require the application of an external force, such as mechanical agitation.

Group D The particles in this region are above 600 um and typically have high particle densities. Fluidization of this group requires very high fluid energies and is typically associated with high levels of abrasion. Drying grains and peas, roasting coffee beans, gasifying coals, and some roasting metal ores are such solids, and they are usually processed in shallow beds or in the spouting mode.

Typically, pressurized gas or liquid enters the fluidized bed vessel through numerous holes via a plate known as a distributor plate, located at the bottom of the fluidized bed. The fluid flows upward through the bed, causing the solid particles to be suspended. If the inlet fluid is disabled the bed may settle or pack onto the plate.